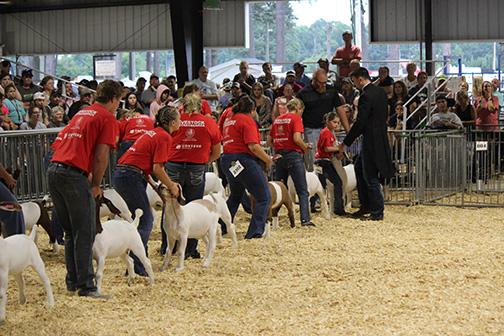 HARRINGTON, Del. — From the hundreds of market animals junior exhibitors brought to the Delaware State Fair, only a few could be named Grand Champion or Reserve Champion at the fair’s Livestock Extravaganza.
After a two-year hiatus due to COVID restrictions, the Extravaganza and its bleacher-packed crowd was back in the fair’s Kent Building on July 26 to present top steer, market lamb, market goat and market swine entries from Delaware youth.
“I am so excited to be here to see once again all of you rallying around our young people who have been working so hard since last Thursday to earn a place in this ring tonight,” said Extravaganza emcee and Delaware Agriculture Secretary Michael Scuse. “But we all know their work started long before the state fair kicked off.”
Before the judges, donning tuxedo jackets and bow ties, made their top selections, each heaped praise on the youth, parents and volunteers for their hard work leading up to the championship round.
“The quality is great out here today,” said sheep judge Alex Wolf. “There’s only a couple of you that get to leave with banners but this is going to be a tremendous experience for each one of you. Thank your parents, thank the volunteers, anybody that’s helped you along the way.”
Goat judge Logan Svonavec told the youth working in the livestock project arena will pay dividends outside of the showring.
“You can’t fake hard work and determination,” he said. “That’s true about real life and showmanship factors into that.”
Starting with the market steer group, judge Ben Warfield of Marrisville, Md., reviewed the final eight entires from the market steer show and chose the steers exhibited by Blair Hill of Lewes, Del., as the Grand Champion and Rylee Ridgely of Camden-Wyoming, Del., as Reserve Champion. Ridgely had two class winning steers in the final round with her heavyweight class winner earning the banner.
After starting with 177 entries in the fair’s market goat show, Svonavec from Mt. Pleasant, Mich., looked over the top 34 entries in the Extravaganza ring and picked the goats shown by Kassidy Hearn of Laurel, Del., for Grand Champion and McKenna Vest of Clayton, Del., for Reserve Champion.
Pared down from 104 sheep entries to 22 first and second place class winners, Wolf, of Upper Sandusky, Ohio, chose the lamb shown by Taylor Brittingham of Smyrna, Del., as Grand Champion and the entry of Sydney Spence of Middletown, Del., as Reserve Champion. The two exhibitor’s entries came out of the same class during the market lamb show, with Brittingham’s lamb first and Spence’s second.
After surveying the group of 20 first and second place hogs, swine judge David Korb of Oxford, Ohio chose the hog shown by Alexiana Hay, of Harrington, Del., as the Grand Champion. Korb chose the hog shown by Braden Hearn of Laurel, Del., for Reserve Champion.
The final part of the Extravaganza, selection of Overall Livestock Champion Showman, brought back into the ring Mason Hay of Harrington, Del., as the top swine showman, Spence as top sheep showman, Vest as the goat showmanship winner, and Hill as the beef champion showman.
After watching the showmen work with each of the four market species in the ring, each judge scored them separately and named Hay as the 16th annual Overall Champion Showman.