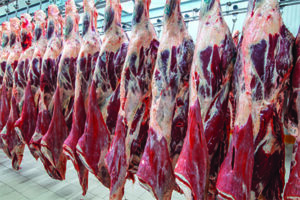 WASHINGTON — The USDA announced this month it will spend more than half a billion dollars to bolster and expand the country’s meat and poultry processing capacity after the COVID-19 pandemic strained the limits of farm producers and slaughterhouses.

The department will distribute $500 million in the form of grants, loans and technical assistance to spur the creation of new meat and poultry processing facilities. Officials hope the assistance will ameliorate the continuing strain on processors, offer alternatives to livestock farmers and improve pricing competitiveness. An additional $155 million will be used to help existing small and very small processors survive and expand.

The cash infusion could help existing and future processors across the Mid-Atlantic expand their operations, which would ease a regional scourge of slaughterhouse waiting lists, said Steve McHenry, executive director of MARBIDCO, a quasi-state corporation that awards grants and loans to agricultural operations in Maryland.

“That could be very helpful,” he said. “We’ve been very interested in helping to support an increase in capacity to process.”

Meat producers in Maryland, Delaware and Virginia have been struggling for years with a shortage of processing capacity that only worsened after consumers flooded butcheries and slaughterhouses in March 2020 to buy local meat after the pandemic arrived. For weeks, grocery stores experienced meat shortages due to plant slowdowns and shutdowns.

Viral breakouts slowed processing at poultry plants across the Eastern Shore, and at least one Maryland meat processor temporarily shut its doors after the virus infected two of its workers in April 2020. At one point, processors were booking slaughter appointments nearly two years out.

“We were busier than ever,” said Brian Smith, vice president of sales at J.W. Treuth & Sons, a Baltimore County slaughterhouse that launched a home-delivery business when the state forced customers into lockdown.

“The COVID-19 pandemic… exposed a food system that was rigid, consolidated and fragile. Meanwhile, those growing, processing and preparing our food are earning less each year in a system that rewards size over all else,” Vilsack said. “This is a once-in-a-generation opportunity to transform the food system so it is more resilient to shocks, delivers greater value to growers and workers, and offers consumers an affordable selection of healthy food produced and sourced locally and regionally by farmers and processors from diverse backgrounds.”

The Biden Administration said massive meat companies leverage their size to abuse farmers, ranchers and consumers, making it more difficult to achieve fair pricing. For every consumer dollar spent on food, farmers’ share has declined from 35 cents in the 1970s to about 14 cents in recent years, the department said.

Many farmers across the country and regionally found themselves unable to slaughter cattle last year, leading, in many cases, to a decline in cattle prices despite a rise in retail meat prices.

But many regional processors took advantage of government programs to refresh their operations. Over the last four months, MARBIDCO distributed 22 grants worth more than $500,000 in total to meat processors looking to expand. In some cases, processors were hoping to move from so-called “custom-exempt” slaughtering to USDA certification, he said.

Custom slaughter facilities can process animals but are not permitted to break them down by cut for the retail market.

“We were just amazed by the demand we had,” McHenry said.

While massive cash infusions may assist the industry, he said anyone interested in starting a meat processor still faces a steep, uphill climb. A new small processing plant may require millions of dollars and a dizzying number of local, state and federal permits. A shortage of skilled processing labor is also a common issue. Efforts across the region are underway to improve processing capacity in Western Maryland, Southern Maryland and Delaware.

The Southern Maryland Agricultural Development Commission labored for years to open a much-needed meat processor in its region. It eventually helped a group of Amish businessmen open their own slaughterhouse, which received USDA certification this year.

Treuth is likely to apply for USDA money, Smith said. The facility has ambitious expansion plans. It recently started dry-aging meat in house and expanded its retail boxing operation to avoid outsourcing. It also purchased a packaging machine for portion-cut steaks and other items.

“We’re very healthy in the sense that we are growing, not shrinking,” he said.