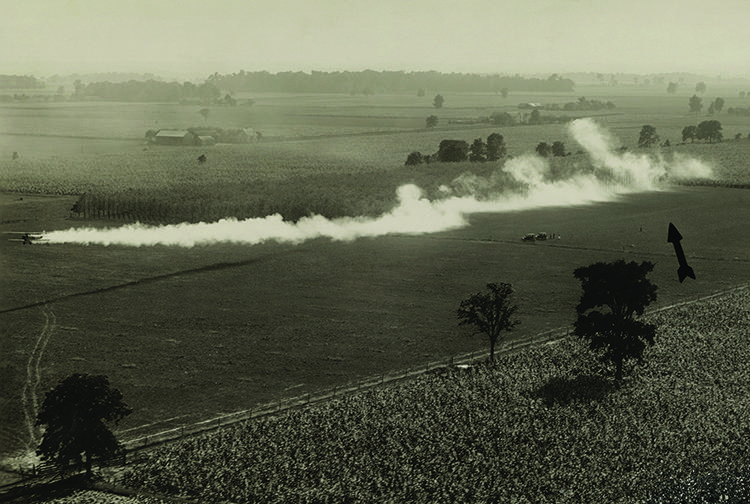 The first documented aerial application and aerial crop dusting flight was flown by Army test pilot Lt. John A. Macready on Aug. 3, 1921. The application was made upwind of a grove of catalpa trees infested by sphinx moth larvae in Ohio. The arrow to the right indicates the wind direction at the time of the application. (Photo courtesy National Agricultural Aviation Association)

ALEXANDRIA, Va. — The date Aug. 3 marked an important milestone in the evolution of American agriculture. On that date 100 years ago, researchers desperate for a way to prevent sphinx moth caterpillars from ravaging a valuable Catalpa tree crop in Ohio came up with a novel approach– What if the caterpillars could be controlled with insecticide dust dropped from an airplane?
Far-fetched as it was in 1921, the idea worked. In an experimental flight conceived by the Ohio Department of Agriculture, U.S. Army test pilot, Lt. John Macready, applied insecticide dust from a World War I surplus biplane over a Troy, Ohio Catalpa grove. The insect pests were successfully dispatched; the trees grown for use as telegraph poles and fenceposts were saved; and a practice now vital to crop production, wildfire-fighting and mosquito control was born.
“The last century has brought remarkable innovation and technological advancement in agricultural production as a whole,” said Andrew Moore, CEO of the National Agricultural Aviation Association. “And no segment of agriculture exemplifies that progress more than aerial application.”
The first recorded aerial application flight a century ago was just the precursor of what was to come. Macready’s lightweight, underpowered aircraft has evolved to the 1,200 horsepower, turbine engine planes and high-performance helicopters that today treat more than 127 million acres of U.S. cropland each year. And the hand-cranked application device used in the 1921 flight has given way to the high-tech spray equipment, GPS systems and on-board data analytics capabilities that make possible the precision crop protection required on the farm today.
“Farming in the 21st century is a complex balance of maximizing yields while preserving sustainability,” Moore said. “Aerial applicators’ efficiency and ability to apply fertilizer or attack pests at just the right time play a key role in helping farmers meet those demands.”
From that initial experiment in Ohio, aerial application went on to help cotton farmers defend their crop against the boll weevil in the 1920s, leading to protection of numerous other crops and introduce helicopters in the 1940s for forest protection and seeding.
In late 1950 the Ag-1 plane was debuted as the first plane made specifically for aerial application. Though only one was made, it was the germination of other models including the Snow S-1, Piper Aviation’s 18 A Super Cub and the Grumman G-164 Ag Cat.
The 1970s saw turbine engines enter agriculture aviation, making planes faster and able to carry larger payloads.
The 1980s saw the dawn of GPS technology in aviation which became commercially available in 1993.
In the late 2000s, precision application is embraced by the aerial application industry. This includes remote sensing, which uses geospatial images taken by satellites, manned aircraft or drones to pinpoint, via various types of imaging, pest problems and nutrient deficiencies in the crop.
NAAA releases its 2019 Aerial Application Industry Survey of Part 137 operators and pilots. The survey documents an increase in the number of aerial application operations and agricultural aviation pilots in the U.S. since 2012 and an increase in acres treated compared to the 1960s. Today there are 1,560 aerial application businesses treating 127 million acres of cropland or 28 percent of the commercial cropland in the United States. There are approximately 2.3 aircraft per agricultural aviation operation, or a total of 3,588 aircraft nationwide.
“Along with its essential place in agriculture, aerial application has become an important tool in wildfire fighting, as well as in public health for mosquito control,” Moore said. “It’s a safe bet that what began as an experiment in 1921 will continue to offer solutions to other challenges in the coming decades, like climate change and the increasing demand for food.”
Looking ahead, NAAA said aerial applicators will continue their work to integrate technology including unmanned aerial vehicles and contribute to the agriculture industry’s sustainability.
“Precision agriculture will continue to grow in importance and agricultural aviation will become even more critical as agricultural aircraft become remote sensing platforms themselves, able to scout for individual pests at the plant level,” the association said. “Aerial application equipment will become automated and able to scout, identify, prescribe solutions and make applications in real time with even greater precision and consideration of meteorological conditions and other variables influencing product movement. Automation of the application equipment will enable the pilot to solely focus on flying the aircraft, surveying for obstacles and resulting in even more improved ag aviation safety.”