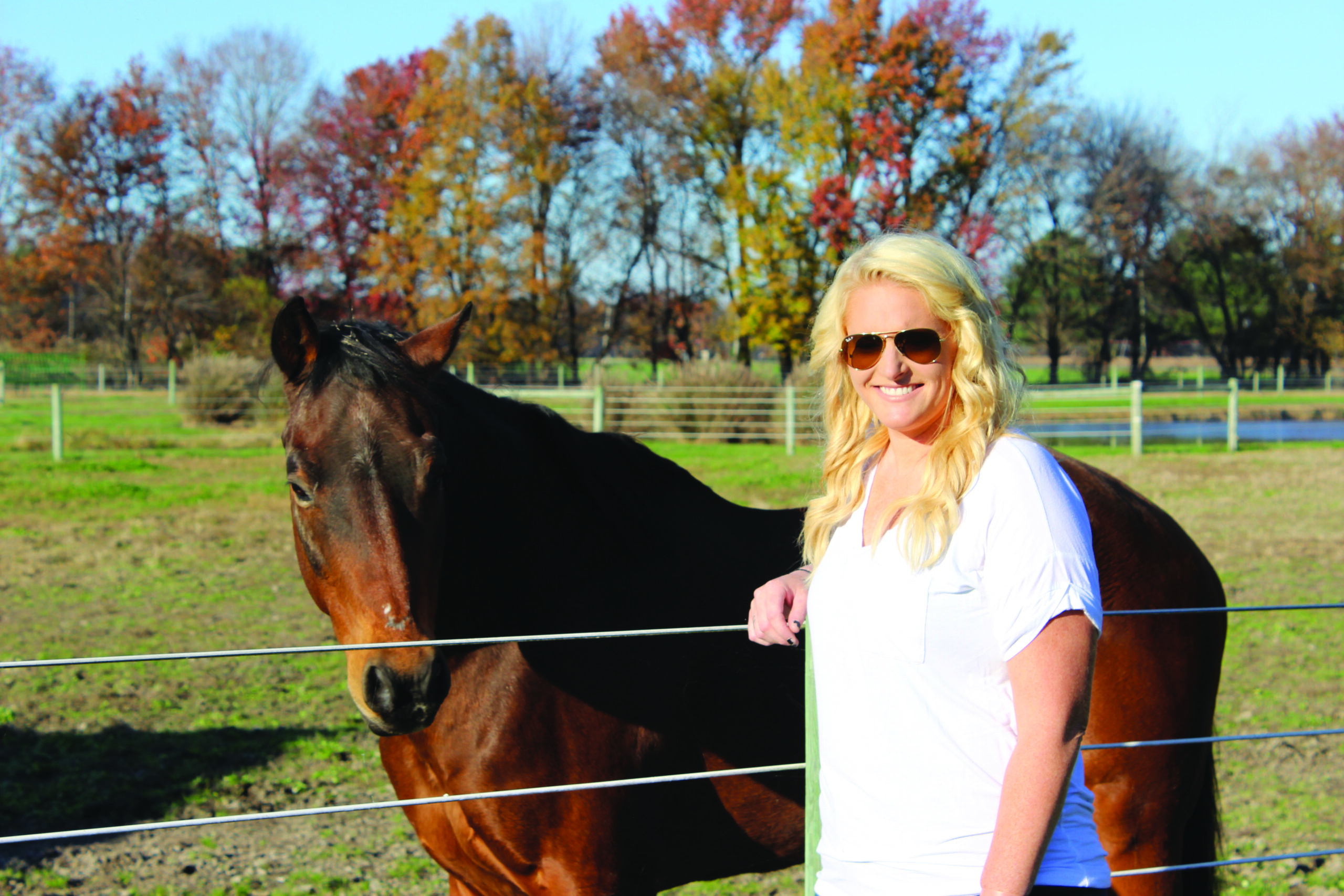 Danielle Cannon visits L.T., one of two horses she keeps on her farm. Riding horses at a young age sparked her interest in livestock and farming, she said. (Photo by Sean Clougherty)

CORDOVA, Md. — Danielle Cannon may not have grown up on a farm, but it didn’t take her long to decide her future was in farming and raising animals.
“I honestly have no idea what I would do if I wasn’t farming,” she said, looking out onto her 40-acre farm that raises chickens, horses and beef cattle. “It’s always been a dream.”
It started at a young age with horses, taking riding lessons but then carried into learning more about livestock through ag-science classes in high school.
She attended Delaware Valley University with plans to be a large animal veterinarian majoring in livestock science and animal nutrition.
She was working on a nearby dairy farm when an accident changed her life forever but didn’t deter her farming dream.
In August 2010 she was heading into her junior year, mixing feed for the farm’s herd when her left hand was caught and pulled into the corn mill. Another farm employee turned the mill off and helped to free her, but Cannon’s memory of the incident is short.
“I just remember it felt like it took forever for the ambulance to come pick me up,” she said. “It was just a lot all at once to go through.”
Cannon was soon helicoptered to a Philadelphia hospital for immediate surgery. Doctors were able to save her thumb but not the four fingers on that hand.
She had a second surgery and spent about four months in bed during the recovery, not driving, not riding horses, not farming.
“Being stuck at home for me was terrible because I’m used to being outside and on the go all the time,” she said. “The hardest part for me was not being able to ride horses.”
Once back on her feet, she started going back to the horse farm with a friend just to watch and be near the animals again. She figured out how to tack and mount a horse with one hand and switched her riding style from English to Western, which allows easier control with one hand.
She had to learn to do just about everything over again, but in a different way. What barely required thought before became a major achievement to reach.
“I thought just the biggest accomplishment was putting my hair up in a ponytail,” she said with a laugh.
All along, Cannon said she was determined to reinvent these tasks by herself.
“I would much rather figure it out on my own than have someone help me,” she said. “I was pretty independent before, but I’d say I’m even more independent now.”
She didn’t let go of her farming dream, either. She ended up not returning to college and worked at a dairy in Talbot County, milking cows and became more intent of getting a farm of her own.
A few years later she and husband Aaron were married and dream only grew.
In 2015, they seized an opportunity to fulfill their farming dream, buying a farm with six poultry houses, growing on contract for Mountaire Farms.
“I really wanted to do cows but this is like a 180 from cows.” Danielle said of raising chickens.
They put a lot of work into updating house on the farm, putting up fencing for her horses and planting trees throughout the property. They’ve recently added a small beef herd to the operation.
Even in her independence, Danielle said renovating the farm wouldn’t have been possible without help from her father, Daniel Fisher, and Aaron’s parents, Tim and Cathy Cannon.
“Anytime we need help day or night they’re always the ones who will come over,” she said.
She added the farm’s previous owner, Scott Collier, was helpful with the first few chicken flocks after they purchased the farm.
Aaron works full-time for Carter CAT, as an off-road diesel mechanic, so Danielle handles much of the daily tasks on the farm. Just like in the months after the accident, she had to figure out her own way of doing things on the farm.
“It might take me 5 or 10 minutes longer but it still gets done,” she said. “I’m not that kind of person that’s ‘woe is me.’ I’ve just gone about my daily life and if I come across something, I’ll figure out how to do it.”
The Cannons have two sons ages 4 and 1, fostering the part of their dream that all farmers share: passing it on to the next generation. And like horseback riding, driving and farming chores, raising children brought its own unique challenges for Danielle in changing diapers, clothes and using car seats.
But Danielle has figured it out.
“It’s been ten years but it’s still an everyday struggle,” she said. “I haven’t let it stop me from doing the things that I like.”