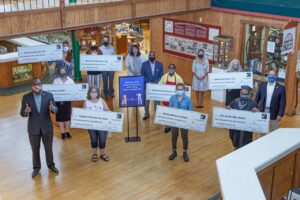 COLUMBIA, Md. — Howard County awarded $800,000 in grants to more than 40 of its farms recently, part of a program funded by federal coronavirus relief efforts.

The money was awarded in July to 44 full- or part-time farms affected by a decline in demand from local restaurants as well as a slide in commodity prices. The announcement was part of a larger program that gave $5.7 million to businesses countywide.

“All of us are trying to get by and move forward,” County Executive Calvin Ball said in a statement. “These grants address immediate needs and ensure businesses have the funds, resources and support to adapt to safety and regulation changes.”

The money was funneled to the county through the federal CARES Act, a $2.2 trillion stimulus bill Congress passed in March to buttress small businesses and prevent layoffs nationwide as the country struggled with business and school lockdowns to prevent the virus’s spread.

The virus has infected at least 6.6 million Americans this year, and nearly 200,000 have died.

“It’s helped us kind of get by,” he said. “Things are challenging right now, so it’s been nice to have a little bit of assistance. … Things are a little less productive right now.”

Other well-known Howard County operations such as Porch View, Clark’s Elioak and Manor Hill farms received grants. Manor Hill received a $2,500 grant, which helped pay for a curbside ordering system the farm quickly arranged after the state’s lockdown began. The farm had to launch a new online ordering system and buy signage, among other costs.

“Anything right now is super helpful,” said Rachael Mull, chief financial officer of Manor Hill, which also operates a popular farm brewery in Ellicott City. “We were able to use that money to buy some additional equipment for setting up our taproom and have guests come here and have it be in a safe way.”

The grant program targeted business sectors most impacted by COVID-19 that planned to reopen. The county also recently closed a second round of funding for the county’s child-care and hotel industries.