‘It made more sense for us’; After struggles growing CSA, couple makes switch 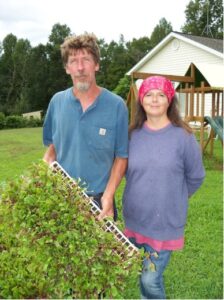 Two years ago, Michael and Amy Carwile closed their CSA program and concentrated more on wholesale customers. Michael holds a tray of swiss chard transplants to be grown for a wholesale customer. Photo by Rocky Womack

CHARLOTTE COURT HOUSE, Va. — For about eight years, farmers Amy and Michael Carwile operated a Community Supported Agriculture (CSA) program, sold wholesale and offered their produce at farmers’ markets and on their farm. The CSA was a mainstay for selling their fruits and vegetables. In fact, the membership was really how they started farming. Approximately 10 years ago, Amy was already selling some products in a CSA, and her husband was working off the farm and farming part time.

Business was good. The CSA kept growing every year.

“We reached a point where we had to scale back,” Amy says, “or he needed to quit his job. He really wanted to farm, so he quit his job.”

The husband and wife team, who operate Archlynn Farm in Charlotte County, Va., offered the weekly CSA from about April to October. However, over time, they tired of the heavy management and intenseness involved in the program.

“It runs you to death,” Michael adds. “When you do a CSA basket, you can’t send a person the same basket of vegetables three weeks in a row. You’ve got to rotate things in and out. It takes a lot to keep it managed. The bigger it gets, the more of a management nightmare it gets to be.”

Amy says, “We loved, loved, loved all of our customers, but we just didn’t have the time to commit to growing all these niche items that we really didn’t have another outlet for. It was just looking like the wholesale was working better for our situation—growing larger quantities of the same thing instead of a row of this and a row that.”

Since the CSA wasn’t “penciling out,” Amy says in 2018, they decided to drop it for other ways of marketing their produce.

To rethink their marketing strategy from a CSA to mostly wholesale operation, the couple joined with other farmers in participating in a local produce organization called the Southside Virginia Fruit and Vegetable Producers Association. A percentage of what they sell goes to the nonprofit, and so far, Amy says the organization has benefitted them and other Southside farmers.

“We wanted to stay more in the wholesale,” she says. “It made more sense for us to grow larger quantities of certain items. Plus, our hearts were really in this produce association that’s been sort of a real pet project of ours, and we really wanted to see that grow.”

As farmers, they fill an association-owned hauling truck with products twice a week and send it off to Produce Source Partners in Ashland, Va., which is a two-hour trip one way. According to the company’s website, this farm-to-table outfit was formed in 2003 and is Virginia’s largest independent produce distributor. For farmers, the company handles procurement, warehousing and distribution of fresh fruits and vegetables. Produce Source Partners sells to convenience stores, restaurants, supermarket chains, schools and universities in Virginia; Maryland; Washington, D.C.; and North Carolina. Besides Ashland, it operates facilities in the Virginia cities of Newport News and Roanoke.

“They make sure Food Lion gets local and fresh,” he says. “Produce Source has been real good to us and to deal with.”

Amy added, “It’s a consistent buyer that we’re able to deliver to. They’ve been just excellent for our farm growth and other small farmers in this area.”

The couple also recently landed a partnership with 4P Foods in Charlottesville, Va. According to its website, the company strives to create an equitable food system by making sure that customers have access to “farm-fresh, healthy food grown using sustainable and humane practices, and that the people who produce that food are able to earn a fair and dignified living doing so.”

4P Foods partnered with Charlottesville-based Local Food Hub, and in 2019 the nonprofit acquired the hub’s distribution operations, according to Local Food Hub’s website. The partnership offers a fruit and vegetable prescription program called Fresh Farmacy, which provides biweekly shares of produce to those “who have limited access to fresh fruits and vegetables and suffer from diet-related diseases.”

Additionally, every Tuesday, Archlynn Farm hauls produce to Lynchburg Grows, a nonprofit in Lynchburg. According to its website, Lynchburg Grows operates an urban farm on a seven-acre site and provides access to fresh, local produce for customers, restaurants and organizations.

Also on Tuesdays, the couple sends some fruits and vegetables to wholesaler Conner Produce in Lynchburg.

In addition, Amy and Michael sell to wholesalers who travel to the farm. Amy says these wholesalers resale to farmers markets and restaurants in Richmond, Va. and Washington, D.C.

Before this new marketing direction, off-farm sales for Archlynn Farm was challenging because of its rural location. This year was different. Either their marketing strategy paid off, or COVID-19 encouraged people to get outside and travel to the farm. “I don’t know if it’s just we’ve been in it long enough now that people know about us, or if it’s been more concentration put on the Facebook page,” Amy says. “People found us this past year.”

She adds their U-pick strawberry business took off and “was the most successful it’s ever been, and we’ve been doing that for eight or nine years.”

Michael explains that customers arrived at 8 a.m., and by about 11 a.m., they had picked the strawberry patch clean.

Amy believes there is a reason for the madness.

“I think there’s a hunger for local food. There’s a hunger to support a family farm. People enjoy that, and I like to think it tastes good when you just pick it. No disparagement against the grocery stores because we want them to stay strong too, but I think it’s gotten people to know that we’re here.

“It’s really important; it really makes a difference,” she says. “The customers that we do have, they almost become like family to us. When I’m planting something, I think, “Oh, so and so is going to love this! We try to know what they like and don’t like.”