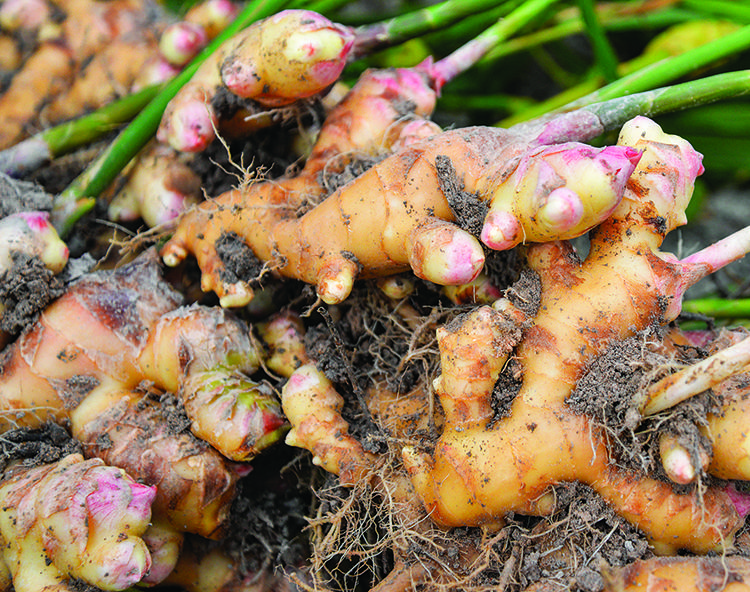 Baby ginger has low inputs aside from fertility with low pest and disease issues and there seems to be a good market for it when grown in the right conditions, Rutgers Extension agent Bill Errickson said. (Photo by Getty Images)

ATLANTIC CITY, N.J. — Bill Errickson, Rutgers Cooperative Extension agriculture and natural resources agent in Monmouth County, knew just how to get the attention of his audience during the New Jersey Vegetable Growers Convention earlier this year: Show them the money.
In discussing the profit potential in growing baby ginger, Errickson showed slides with prices for baby ginger at the outset: $19 a pound in Portland, Ore.; $14 a pound in Boston; packaged baby ginger from an Asian grocery store in New Jersey at $16.99 per pound.
Last year at their Cream Ridge site, Errickson and his team harvested 438 pounds of ginger from the 30 pounds of ginger seed and investment of $300.
“At $16 a pound retail, that’s over $7,000 worth of ginger,” he said.
Starting out with clean seed, which in ginger’s case are actually rhizomes, and the right varieties is critical, Errickson said. To avoid bacterial soft rot, fusarium and other ailments, he stressed the importance of starting with clean seed and using well drained soil.
“It is possible to save [ginger rhizomes] from year to year, but it really is an insurance policy to obtain clean seed every year. It’s not necessarily worth it to take the risk and save your own seed from year to year.”
Seed costs are about $10 a pound. Last year, he ordered a case of 30 pounds, delivered from Hawaii, for $300.
“It’s a crop where you don’t want to cut corners in temperature or fertility in the timing, you want to grow it out properly,” he cautioned. Last year at the Rutgers Fruit and Vegetable Research Farm in Cream Ridge, N.J., Errickson ordered from a company called Hawaiian Organic Ginger.
They’re a reliable supplier and work with smaller growers who order on time, he said.
Their seed is disease-free because they start with tissue cultures, he said. He recommends starting them out on heated mats with consistent soil temperatures after that at 72 degrees. The rhizomes don’t like to be too wet or too dry, so watering has to be done cautiously.
“Ginger wants a really long growing season,” he said. “Just as you start your tomato seedlings early to get them enough time to fruit and produce during the summer, ginger goes through a pre-sprouting phase.”
He recommends spacing them a few inches apart in seed trays with holes to drain, with a thin layer of an inch or two of potting soil until they break dormancy. Rhizomes can be started in late February or early March. Keep the rhizomes/seedlings moist, but never too wet.
“If you wait until late March or early April, you may be pushing it,” he said. They also don’t take up a lot of space in the greenhouse.
“You want to wait until soil temps in the tunnel are 55 degrees or higher,” he said. “Add organic matter and compost. By early to mid-May, temperatures are about at this level, so it’s similar to planting sweet potatoes.”
Once ready for transplant, he said six inches is kind of an industry standard, so he spreads them out in the high tunnel.
His total growing space last year amounted to 600 square feet.
“We set up drip irrigation right away and we want to control that moisture right away. We set the timer and a drip system in a light layer of straw mulch,” he said. As they grow in the soil, they look similar to garlic in some ways, he said.
During trials last year at Cream Ridge, “each week, we harvested five feet of the beds to spread out the harvest season,” avoiding the problem of having hundreds of pounds of ginger to harvest at one time.
“It’s easier to spread it out over six weeks and have a steadier supply of fresh baby ginger for all of your customers,” he said, noting, “it’s safe to start harvesting in early October and harvest throughout the month.”
Errickson recommends selling fresh baby ginger in quarter-pound pieces, but it’s also a good idea to put a few bigger chunks out on display to capture the imagination of ginger enthusiasts.
“Somebody may decide they want that really big piece,” he said.
Last year, Errickson and his team worked with 18 different restaurants, breweries and distilleries in Monmouth County, giving them bags of ginger and asking them to fill out extensive surveys.
“Of those folks, 82 percent had never used ginger before and 91 percent said they’d be likely to purchase local baby ginger in the future,” Errickson said. “Nobody said they would not buy it, and 91 percent said they would purchase it if it was available from local farmers.”
Errickson said as more people become aware of the health benefits of baby ginger the more potential it has for growers. Unlike conventional ginger, baby ginger is easier to slice, doesn’t have to be peeled, and can be ordered certified disease-free through reputable dealers.
“It has low inputs aside from fertility with low pest and disease issues and there seems to be a good market for it when grown in the right conditions,” he said, thanking the Vegetable Growers’ Association for helping out with funding for the baby ginger trials.
This year, “we’re going to continue our trials in high tunnels, but we’re also going to see how it does in the black plastic outside,” he said. “Even if we get a 70 percent reduction in yield, it’s possible it could still be profitable to grow.”