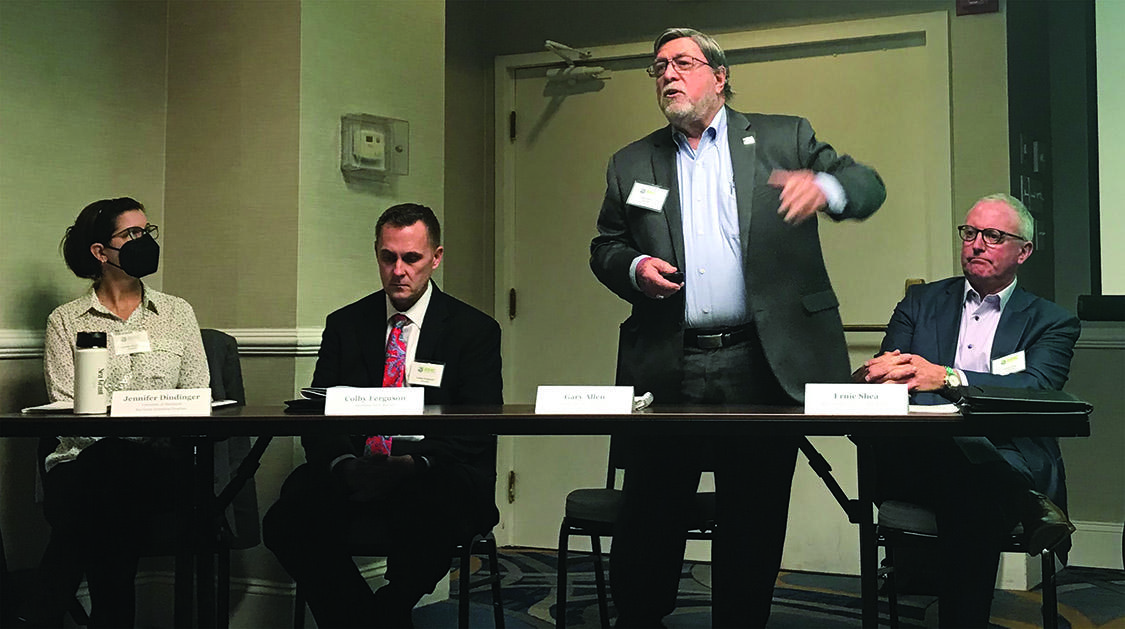 Gary Allen, president of the Maryland Forestry Association, addresses a seminar regarding the projected effects of climate change on the state’s agriculture industry during a Rural Maryland Council conference in Annapolis on Dec. 1. From left are Jennifer Dindinger, a watershed restoration specialist at the University of Maryland Extension; Colby Ferguson, government relations director at the Maryland Farm Bureau; Allen; and Ernie Shea, president of Solutions from the Land, a Lutherville, Md., nonprofit dedicated to land management issues. (Photo by Jonathan Cribbs)

ANNAPOLIS, Md. — The state agriculture industry will increasingly have to contend with and adapt to the disruptive effects of climate change, including sinking land on the Eastern Shore and increasing precipitation, a panel of agricultural experts said on Dec. 1.

Climate change is already creating consequences for residents on the Lower Eastern Shore where some students are occasionally forced to miss school when bus routes are washed out by flooding, said Jennifer Dindinger, a watershed restoration specialist at the University of Maryland Extension. Some Shore jurisdictions, such as Kent County, are already ordering climate change projections into their comprehensive planning as they prepare for rising sea levels. That and increased rain across the region will be problematic for the Shore, she said.

“The increased amount of precipitation on the ground sort of has nowhere to go when the sea levels have risen because the water — due to our pretty flat landscape and the aforementioned sinking land — has nowhere to go,” she said.

Dindinger was part of a seminar dedicated to the projected effects of climate change on agriculture and forestry. It was part of the Rural Maryland Council’s 2021 summit at the DoubleTree hotel in Annapolis on Dec. 1.

Agriculture has been adaptive since its beginning, including to shifts in climate, said Colby Ferguson, government relations director at the Maryland Farm Bureau. When sulfur was taken out of diesel fuel, which effectively removed it from the atmosphere and crop fields that needed it, farmers responded with sulfur supplements.

Changes in agriculture over the last century or so have been dramatic, he said, as the country moved from one where roughly half of its citizens were farmers to today where just 2 percent are. Those farmers not only meet the United States’ food needs but other countries’ as well.

“And really what agriculture has had to learn to do forever is to do more with less. We’re finding that every year we have less land, we have less people to do it,” he said.

“It’s not because we’ve magically found new land or we’ve cut down all the forests,” he said. “We’re doing it through the use of genetic modification.”

Innovations such as drought-resistant seeds and precision agriculture have radically updated an industry whose food output rises even while the quantity of inputs, such as fertilizer and herbicides, falls. Farmers today use more than 40 percent less of inputs on all farm products than they did in the past while producing two to three times the food, he said. All of these improvements help the environment, including the Chesapeake Bay’s water quality, he said. Agriculture can also be climate-positive as trees and cover crops, which keep cropland green year round, remove carbon dioxide from the atmosphere.

Forestry, a critical sector of the industry, also plays a significant role in fighting climate change, said Gary Allen, president of the Maryland Forestry Association. Trees improve air quality in urban areas and they assist biodiversity by providing animal habitats. Forestry and logging help make that possible by incentivizing landowners to keep their land forested instead of developing it.

“Dead or alive, trees are valuable,” he said. “In respect to climate change, what we want to see is a living forest. … A well-managed forest can increase carbon sequestration.”

But landowners and government officials need to be better educated about what they can do with forestland, and that needs to be reinforced with better funding and new forestry-friendly policies and legislation, Allen said.

The University of Maryland’s Harry R. Hughes Center for Agro-Ecology is in the process of completing a report on climate change vulnerabilities across the state’s agriculture industry and how to prepare producers for them, including mitigation strategies, said Ernie Shea, vice president of the center’s board of directors. The report will be presented to the legislature in January.

“This is a major threat multiplier and we cannot sit by and accept business as usual is going to solve these problems,” he said. “We really need to think and stretch and accelerate what we’re doing.”

CORRECTION: This story initially misspelled a reference to the Harry R. Hughes Center for Agro-Ecology. The error has been corrected. The story also correctly identified Ernie Shea as president of Solutions from the Land, but he attended the seminar representing the Hughes Center as vice president of its board of directors. That clarification has been added as well.