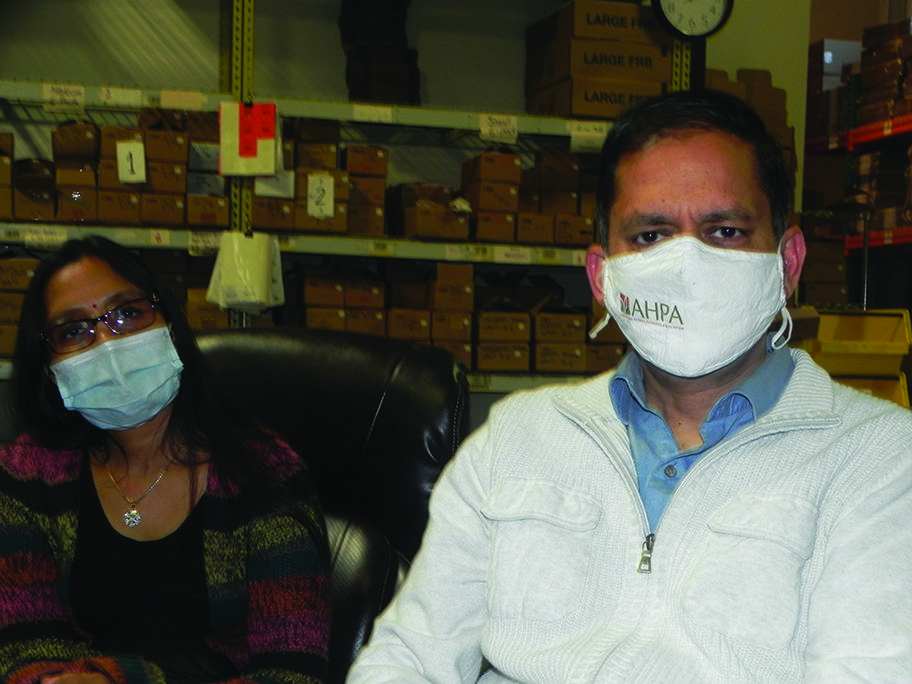 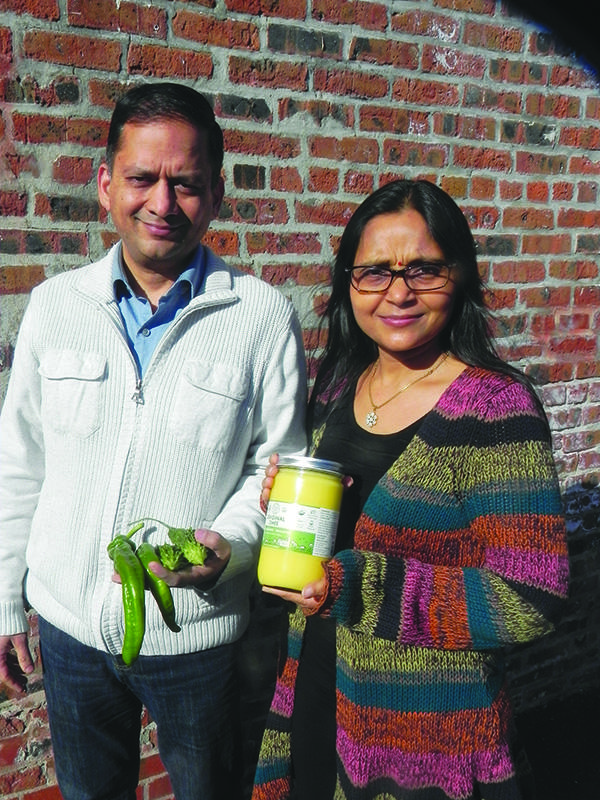 Sandeep Agarwal and his wife Nalini started Pure Indian Foods in 2008 selling ghee, a type of clarified butter originating from India and other Indian foods. They said they want to find local organic growers to grow the crops they sell. (Photo by Richard Skelly)

TRENTON — Pure Indian Foods, is the result of Sandeep “Sandy” Agarwal and his wife, Nalini’s, early efforts to help their son, themselves, and, later on, Central New Jersey’s Indian population as well as others curious about Indian herbs and foods like jalokia peppers, bitter melon, Indian eggplant and ghee, a clarified butter created in India, and other Indian foods.
When their son Arjun was a toddler and frequently ill, Sandy began researching raw milk as a way to boost the immune system by putting good bacteria back into the gut.
He and Nalini and their then-young kids began making regular road trips to Pennsylvania to purchase raw milk from dairy farms in Bucks County. He said that and other changes to his son’s diet, better sleep and exercise played a role in him getting better.
All of those trips to dairies and local organic farms, he said, “increased my faith in local dairy and local, organic foods.”
Nalini launched Pure Indian Foods in 2008. Within two years they were producing ghee in smaller commercial kitchens.
Early customers were patrons at the West Windsor Farmers’ Market and they found receptive buyers at the Whole Earth Center in Princeton.
In 2011, they rented a booth at the Specialty Foods Show at the Javits Convention Center in New York and a reporter from the New York Times wrote a story about their start-up business. They soon had more phone calls, e-mails and orders than they could process, so Sandy left his part-time job to work with his wife. They went from producing ghee in smaller kitchens around Lawrenceville and Trenton to working with bigger volumes at the two Rutgers Food Innovation Centers in Piscataway and Bridgeton.
“We thought ghee might be a good product to launch here, made from local raw milk,” he said. “Ghee was very new in this country 13, 14 years ago.” Just like coconut oil or olive oil, ghee does not have to be refrigerated.
“Ghee is a medium, just like you can process things with different spices and herbs,” Sandy said at their office and distribution warehouse on the border of Trenton and Hamilton Township. “You can put rosemary or oregano in olive oil, well it’s the same thing in India, people process ghee in different ways to make it more flavorful,” he said.
“I had no experience in selling food. We used to buy a lot from Whole Earth Center, so we approached them and they were happy to keep and sell our products for the last 10 years now,” Agarwal added.
He said once they scaled up to bigger cooking vats used at the Rutgers Food Innovation Centers, they had to be much more careful in preparing the ghee they sell.
“We had scaled up, so now we were taking a bigger risk in processing it, we were moving to a larger kettle, but ghee is a very delicate product to make, so she’s constantly turning the heat up and down,” he said.
“We messed up some big batches,” he added. “You want to make more money by selling more, but on the flip side, it’s a bigger loss. Nalini’s job is very, very critical. It gets very stressful.”
Agarwal and his family live in Lawrenceville, and today, Arjun is a senior at Lawrenceville High School and about to enter college next year. His daughter, Anjali, will graduate this year from New York University’s Stern School of Business, where she studied marketing.
Pure Indian Foods offers a wide range of products — beyond more than a dozen varieties of ghee — that they offer. Going forward, Agarwal said he and his wife are interested in getting back out to more farmers’ markets like the West Windsor Farmers’ Market to get more ideas from customers about expanding their product lines.
“We got great response when we used to go to the West Windsor Farmers’ Market on Saturdays and made great friends and lovely connections,” he said.
Looking toward the future of Pure Indian Foods, Nalini and Sandy said they’re very interested in finding local organic growers to work with.
“I don’t want to import fresh vegetables from India,” he said.
They are interested in talking to smaller growers about raising Indian eggplant, bitter melon, curry and peppers commonly grown in India.
“We are looking for local organic farmers but we also want to eventually have our own small farm. That is my dream.”