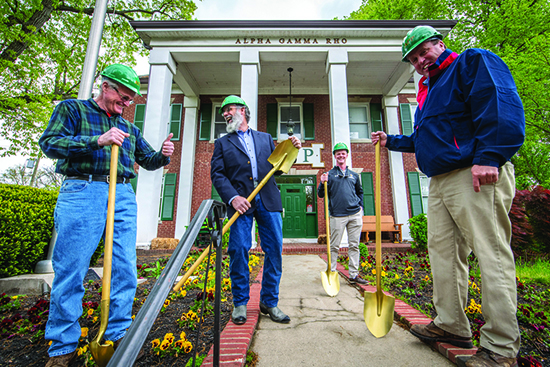 COLLEGE PARK, Md. — The University of Maryland chapter of Alpha Gamma Rho, a professional and social fraternity for students who have a history with or plan to work in agriculture, broke ground this year on a major house renovation, the first time the house has been renovated in more than 30 years.
This renovation is occurring alongside a period of growth and resurgence for the UMD AGR chapter, receiving national recognition multiple years in a row for its outstanding students and community service.
Totaling $1.8 million, over $1 million of the renovation funds were raised directly from the Maryland AGR alumni base, highlighting their dedication to the many advances this chapter is making.
With a commitment to national excellence, numerous professional opportunities, and a unique culture of respect and personal development, AGR offers an exceptional greek life experience that isn’t what you might see in the movies.
“We as a fraternity are in the business of making better men,” said Logan Yearsley, the Maryland AGR chapter house director. “As agriculture and the College of Agriculture and Natural Resources has diversified, so has AGR, helping our chapter grow and expand. This house renovation is an exciting part of that growth.”
This year, the chapter was awarded the Sleeter Bull Most Improved Chapter Award.
According to Yearsley, this award is only given out every two years during the National AGR Convention and is earned by a top-tier chapter that has shown tremendous growth and improvement to become one of the best in the nation.
“We have worked for the last decade to grow a chapter that is worthy of celebration,” says Yearsley, “and this award is the culmination of those efforts. It was a combined team effort of an engaged alumni board, growing collegiate chapter, and a determined house director that made this award possible.”
Last year, the achievements and growth of the chapter over the last decade shone brightly at the National AGR Awards as well, with the Maryland AGR chapter winning four major distinctions, including two going to our own recent Spring ‘20 graduate in Landscape Management, Zachary Jones.
Jones was recognized as one of only three Outstanding Undergraduates of the Year across 70 chapters nationally averaging about 50 students per chapter.
This is the highest honor bestowed on an AGR student, and it is the second year in a row that Maryland has received this distinction, with former chapter president and Spring ‘19 graduate Michael Wijesinghe winning last year. As an Agricultural Science & Technology major with AGNR, Wijesinghe co-founded Green Roots, a hydroponics club that now has more than 40 members across campus and grows produce for the campus community, with the goal of improving food security.
“To have two undergraduates of the year in a row from the same chapter is a tremendous accomplishment, especially from an East coast school and a smaller chapter. Speaking as a former national staff member, it’s a big deal and shows the strength of the chapter and college,” says Yearsley.
In addition to receiving second place for alumni leadership and second place in social and cultural leadership development (awarded to Yearsley as house director), the Maryland chapter also received third place nationally for its efforts in philanthropy, further recognizing Jones’ leadership as Vice Noble Ruler of philanthropy.
The philanthropic spirit shows through the entire AGR chapter, with students like Wijesinghe and Jones giving back to their local communities in their personal lives, while also contributing to major chapter initiatives like suicide prevention and awareness through events like Mitch-a-palooza (remembering a student that took his life in 2014) and volunteering at homeless shelters.
This isn’t the only way that AGR is helping to “make better men.” AGR was also the first fraternity to nationally end traditional pledging in 1992 through the Brotherhood Program, and was the first fraternity to ban hard alcohol at UMD. “Respect is always the first on our list at AGR, and I think it always will be,” says Jones. “Once you’re a brother, you’re entitled to just as much as a senior who is about to graduate. There is no hierarchy, and everyone has respect for each other that is made stronger by a common history in agriculture and a common interest in giving back.” Yearsley adds, “How are we going to be the best men on campus? That is central to our values at AGR.”
“Our chapter house has housed men of agriculture at UMD for a long time,” says Chris Cavey, AGR alum, the chapter’s Education Foundation President, and Secretary of Appointments in Gov. Larry Hogan’s office. “After WWII, it was expanded in 1950 and grew with the university. Our current project has been in the fundraising mode since 2014, and our roughly 800 living alumni have donated $1 million over the past six years. This dedication defied the fundraising formulas and surprised the professional fundraising organization we hired. They flat out said we could not make our goal, but they would help us raise whatever we could. Our brothers through the years have been leaders in the agricultural community as well as both dedicated UMD and AGR alums, and that commitment has proven them wrong.”
“For me, it comes down to common bonds,” says Frank Allnutt, another AGR alum and former director of the Maryland Agricultural Experiment Station centers across the state with AGNR. “Birds of a feather flock together,” adds Bill Allen, President of the Alumni Corporation. “If we are successful at the house and at the college, it will encourage other positive and like-minded people to get involved because we all want to be part of something successful like AGR at Maryland.”