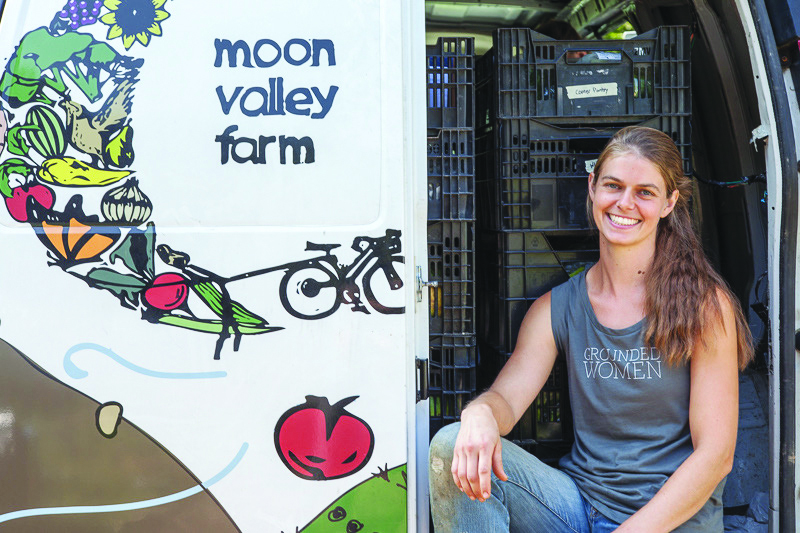 When Emma Jagoz’s Moon Valley Farm got word from the restaurants it supplies that they were closing due to the COVID-19 stay at home order, she decided to offer her CSA program seven weeks early because she had so much produce ready to go. (Photo courtesy Katie Ward)

WOODSBORO, Md. — Emma Jagoz’s concern for her unborn son’s nutrition led her to cultivate her own food.
The vegetarian and University of Maryland American Studies graduate began in 2009 by growing arugula on a table on her apartment patio.
“I was … on my best behavior dietwise — eating salads and wraps and drinking juices to make sure I was healthy,” Jagoz said. “Because I was pregnant, I was looking into all of the [nutrients] that growing children need.”
By 2011, Jagoz was pregnant with her second child, and she expanded her produce selection by creating a large garden in her parents’ 2 1/2-acre backyard in Cockeysville.
Jagoz wasn’t selling her produce, she clarified; she explained she was learning how to grow and was growing for her family.
Then Jagoz set out to establish a business.
She thought about what she wanted out of the business and out of life — for herself and her children, she said.
Spending time in the outdoors and knowing where their food is from were important factors, she said.
“I thought that having a connection with nature at a younger age would serve the children in the long run,” Jagoz said. “There are a lot of issues that our society has right now due to a lack of connection with our environment and our food. The farther removed we are from education and healthy food sources, the easier it is to fall into unhealthy habits that can affect an entire life.”
Farming, Jagoz said, “was something that I believed in.
“It helps to destress, provides a greater appreciation of life. It teaches all sorts of lessons that you can’t learn in books and that you learn better than you do in books.
“It was not just about making money.”
Now, Jagoz is making money.
She took on a business partner for her Moon Valley Farm some five years ago. She has grown her staff to 12 and raises what she calls nutrient-dense organic produce.
Moon Valley until this year catered only to restaurant clients. Since COVID-19 reduced and minimized orders, Jagoz has added Community Supported Agriculture members and home delivery consumers to her clientele, she said.
Many are neighbors like those who work at her farm and help as her parents do with her son Mason, now 11, and daughter, Anisa, 9, she said.
Jagoz calls the extended brood a “farmily.”
In December 2019, after bartering with landowners for leased farm acreage that she built to 15 over the course of eight years, Jagoz purchased 25 Frederick County acres.
There in the field and in a hoophouse Moon Valley Farm grows cabbages, lettuces, carrots and radishes that she said Anisa and Mason enjoy tugging from the ground as muchs as they do cooking and eating them.
Weekly CSA boxes feature seasonal items that for November include kale, salad greens, winter squash, turnips and more. Jagoz also provides add-ons such as honey, grains, mushrooms and fruit, the Moon Valley Farm website shows.
Jagoz’s farming focus, she said, is on the soil and on practices that serve it: crop rotation, cover cropping and crop timing to limit pest damage.
She also samples every half- to full-acre of soil for the needed amendments that ensure her produce is as nutrient rich as possible, she said.
Moon Valley Farm’s business has expanded largely through positive word-of-mouth, Jagoz said. She also utilizes communications resources such as social media.
Jagoz said that she has found agricultural communities throughout Maryland and into Pennsylvania open and friendly.
“Women are fantastic workers on my farm, and I know a lot of female farmers who are doing well,” she said. “They’re taking the reins in farming businesses, and I love seeing that.”
They’re networking and supporting each other, she said.
Support is important when juggling the challenges of full-time work and parenting, particularly in a year that required expanding marketing opportunities earlier than planned and ensuring that Anisa and Mason remain on track and complete schoolwork in a virtual environment.
Jagoz’s work days on the farm now includes checking on the youngsters throughout the day as their class sessions shift.
At the same time, Jagoz said, “when the kids were ‘superyoung” she couldn’t formulate a good argument as to why she should be on a tractor rather than with them.
“Now they have activities, too. They have friends. They go to parties.
They can cook for themselves.
“They became a little more independent a little earlier than some kids, but I think a lot of farm kids are like that.”