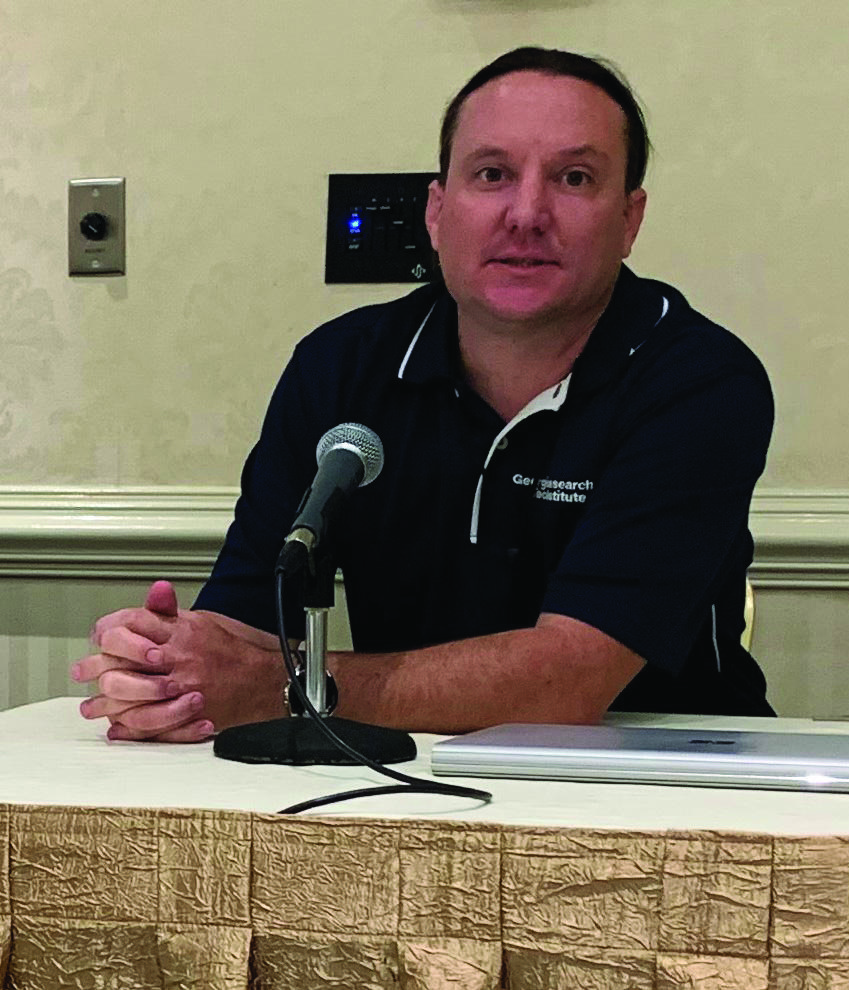 Speaking at the National Meeting on Poultry Health, Processing and Live Production, Colin Usher, senior research scientist at the Georgia Tech Research Institute said integrating virtual reality and artificial intelligence into poultry processing has its challenges but also a lot of potential as the technology improves. (Photo by Nancy L. Smith)

OCEAN CITY, Md. — Do virtual reality, artificial intelligence and robots have a role in the future of poultry processing?
Yes they do, Colin Usher, senior research scientist at the Georgia Tech Research Institute, the applied research arm of Georgia Tech, told industry leaders at the National Meeting on Poultry Health, Processing and Live Production.
But it won’t be easy.
There are huge challenges to using artificial intelligence systems to operate robots on a processing line, Usher said. He explained that sensing systems would have to identify individual chickens from a pile, then direct robots to manipulate them individually and place them properly, such as in cone loading. “These things are very challenging for a robot to do,” he said.
He explained that, because every chicken is unique, each one has to be processed uniquely. “You need to be able to sense and make the right decisions, you need to be able to manipulate all of the product properly and you need to be able to accurately measure it and make the right decisions so you can treat the product uniquely.”
Unlike manufacturing where artificial intelligence and robots are widely used, there are significant challenges to using robots on the plant floor, Usher said, because each chicken is unique, malleable, slippery and messy. “It’s not a car assembly line,” he said.
Beef and lamb processors in Australia and New Zealand use robots, but Usher explained that it is difficult to apply their experience to poultry processing because poultry is a high through-put operation while beef is a high-value product with a much slower processing line.
“With poultry, you’ve got up to 180 birds per minute,” he said. “Even cutting-edge artificial intelligence has a 90, 95 percent accuracy in making the right decisions to control the robot. Ninety percent accuracy at 180 birds a minute is 18 times you’re failing a minute.
“Even if you can make the right decision, manipulating is hard. A chicken [carcass] sitting on a stainless-steel table is slipperier than an air hockey table,” he said.
Usher said advances in sensing may make robotic processing possible in the future. For example, he said, a 3-D imaging sensor in a commonly available video game may be adapted for use in processing plant automation. “Ten years ago, that was a $50,000 camera with half the resolution,” he said.
Usher noted some automated deboning systems are available now, but “you get marginally less yield with an automated system than you get with people on the processing line.
That affects the bottom line,” he explained. Despite this shortcoming, he said, some plants “are sacrificing yield and implementing automated deboning systems now because of the labor shortage.”
Usher speculated on the use of virtual reality, now used primarily in gaming, in chicken processing. He discussed one “outside-the-box” project using virtual reality systems. He reminded his audience that “poultry processing is hard; it’s harsh environments; it’s cold; it’s humid; the tasks are very repetitive; it’s dangerous; there is high turnover and chronic labor shortages.”
His project would harness VR to enable a human at a remote site to direct a robot in a processing plant. The human, wearing a VR headset, could be in a safer, more comfortable location, possibly in a different city or country.
Usher explained that the human in a virtual environment would only have to click to indicate to the robot what to do or where on the chicken to do it.
The human would not have to wait for the robot do its task. This has major implications beyond just automating a process, he explained, because the human could immediately switch to another robot, perhaps in another state or country, and tell it what to do.
Repeating this process, the human could direct robots in many locations over the course of a workday. This would “enable a new type of workforce,” Usher said, similar to Uber where, if you have a car, you can drive people around. Likewise, in his scenario, if you have a VR headset and appropriate training, you could log in and find processing and manufacturing tasks with robotic systems and “put your VR headset to work and make some money.”