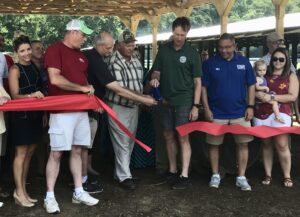 CROWNSVILLE, Md. — The Anne Arundel County Farm Bureau this month dedicated a new livestock pavilion at the county fairgrounds to the Earl Griffith Family, a prominent farming presence in the county for four generations.

A large group of friends, farmers and supporters gathered beneath the pavilion for the dedication on July 20 despite a scorching heatwave that baked the region for several days with temperatures reaching close to 100 degrees.

“This has been a long time coming,” said John Faber, president of the county Farm Bureau. “If you don’t know what the Griffith Family has done for Anne Arundel County, first of all, you should.”

Earl “Sonny” Griffith died in February at 82 years old. He was a lifelong farmer and spent much of his career raising tobacco on the family farm, E. Griffith & Son, in Lothian. He was inducted into the Governor’s Agricultural Hall of Fame in 2008 for the family’s progressive approach to farming and commitment to conservation.

The Griffith farm was one of the county’s first to adopt a nutrient management plan in 1992. The family adopted a motto: “If you take care of the land, the land will take care of you.”

The couple’s son, Jeff Griffith, a former county Farm Bureau president who runs the farm, thanked the county before cutting a ceremonial ribbon to open the pavilion.

“Mom and dad would be proud,” he said.

The ceremony also included the unveiling of a pavilion sign, which includes the dedication.

“In the community, the Griffith family was always there for everybody. Just very generous people and very, very passionate about agriculture and farming and the lifestyle,” said County Executive Steuart Pittman, also a farmer. “Everybody knows them. Everybody loves them.”

Before the new pavilion was built, 4-H members erected a tent over the show ring, which frequently led to children and spectators tripping over tent stakes. The Farm Bureau paid for the roof, and Harwood 4-H Club is fundraising to pay for an electrical system and fencing. They hope to raise enough money by Aug. 1 to complete the work in time for the county fair in September.