Area barley harvest down 36 percent since 2012 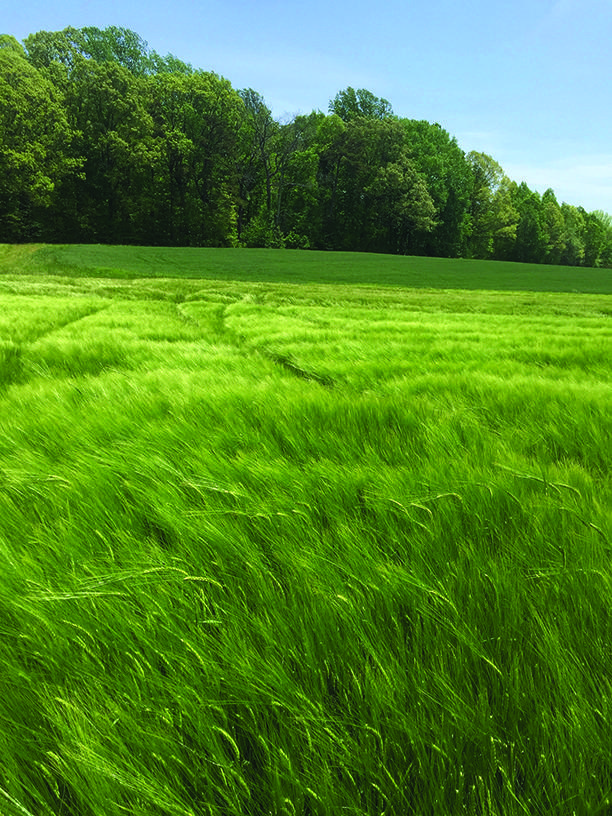 Along with pricing and the loss of large local buyer, the weather has affected barley farming in the region. (Photo courtesy Virginia Department of Agriculture and Consumer Services)

While Maryland ranked as the 10th largest barley producing state in 2018, according to the USDA — barley farming has been retrenching in the three states in the region for many years.
According to the 2017 Census of Agriculture, 142 farms in the nine counties Maryland’s Eastern Shore grew barley on 14,123 acres.
Those statistics compared to the 2012 Census of Agriculture which reported that there were 288 farms in the nine Delmarva counties producing barley on 22,083 acres.
The amount of barley harvested in the nine counties decreased more than 36 percent from 1.95 million bushels in 2012 to 1.2 million bushels.
More than half of all of the Eastern Shore farms and acreage dedicated to barley farming was in three counties — Caroline, Queen Anne’s and Talbot — in 2017. The decline in barley farming was most evident, according to the USDA, in Kent County, Md.
The number of farms in that county went from 53 farms in 2012 to 16 farms in 2017, the number of acres harvested with barley went from 4,953 acres to 1,380 acres, and the number of bushels of barley produced went from 483,913 bushels to 120,417 bushels.
The decline in barley production was even more pronounced in Delaware with a decrease in barley production from 2012 to 2017 of more than 45 percent. USDA stated that 2,810,864 bushels of barley were harvested on 33,455 acres of 199 farms in the First State in 2012 according to the Census of Agriculture for that year. The 2017 Census of Agriculture indicated that the amount of barley harvested was 1,525,040 bushels on 18,784 acres of 110 farms. In Delaware, the bulk of the farms and the acreage were in Kent and Sussex Counties.
Barley farming has decreased substantially on Virginia’s Eastern Shore. The USDA reported in its 2012 Census of Agriculture that 13 farms in Accomack County produced 210,360 bushels of barley on 2,366 acres.
The 2017 Census of Agriculture reported that 4 farms harvested 28,502 bushels of barley on 592 acres in Accomack County. Statistics were limited for Northampton County, with two farms producing barley in 2012 and one farm in 2017.
“Over the past five years, barley acreage in the state has averaged around 30,000 acres with production averaging around 450,000 bushels,” said Michael Wallace, Director of Communications for the Virginia Department of Agriculture and Consumer Services. “The vast majority of this barley is sent to feed millers in Virginia and in surrounding states. There is a small niche market for distilled spirits and barley malters in the state, but this is a much smaller market due to stringent quality control specifications, segregation and cleaning equipment needed by the farmer.”
Part of the reason for the lower levels of barley production in the three states is pricing.
“The biggest factor impacting production is lower prices,” Wallace said. “As a feed or feedstock, barley is largely priced on a percentage to corn. Barley’s feed value usually runs around 60-65 percent of the feed value of corn. With lower corn prices in recent years, barley has averaged between $2.75 to $2.85 per bushel.”
A specific customer helped drive production in Virginia.
“When a large ethanol plant was active in Virginia in 2011, the acreage of barley in the state was higher and barley averaged $4.28 per bushel with some growers contracting barley at slightly over $5 per bushel,” said Wallace, referring to the facility in Hopewell, Va., initially operated by Osage BioEnergy and then by Great Plains Inc. “The ethanol plant closed in 2018.”
Beyond pricing and the loss of large local buyer, the weather has affected barley farming in the region.
“Recent challenges for Virginia barley growers are wet harvest seasons, in late May-June, which greatly reduces quality and test weight,” Wallace said.
As with other types of grain crops, barley is used by farmers to help minimize soil erosion. “In terms of sustainability, barley like other small grains is an important winter cover crop and greatly enhances soil water retention, reduces soil erosion and nutrient runoff, and improves soil tilth and health,” said Wallace.