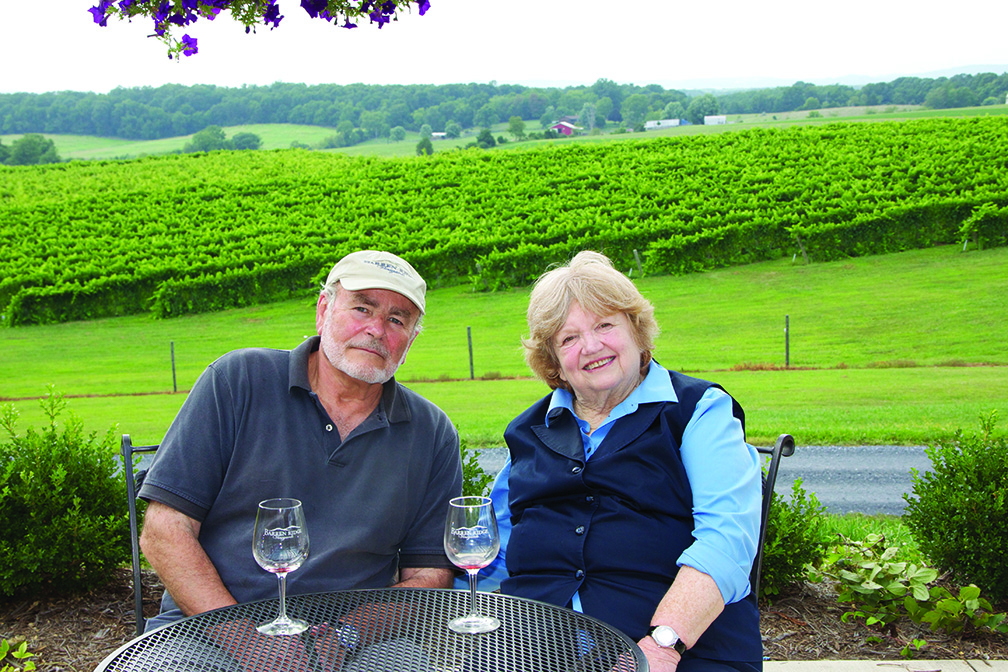 Adults out to sample the Mid-Atlantic coast and mountains through the chardonnays, viogniers and petit verdots that the land helps to produce have had about as easy a time accessing the region’s sprawling vineyards as they would have had during Prohibition.
Tasting rooms where many vineyard’s sales take place were largely closed between March and May. The venues have since reopened — often outside and, like restaurants, to limited customers.
As the popular summer sales season nears an end, vineyards are reporting earnings losses of as much as at least 35 percent.
“All of the functions necessary for farm wineries to survive are severely compromised,” John Higgs, owner of Barren Ridge Vineyards in Fishersville, Va., said.
Vineyards in addition to on-premise sales sell through the Internet, farmers’ markets and retail outlets, but “it’s important to get [people] close to production and familiar with what farmers do,” Higgs’ son Robert Higgs said.
While increasing numbers of consumers during the stressful pandemic are purchasing wines at retail outlets, according to a Nielsen survey, they have been opting for boxed varieties and larger brands.
Consumers trust the big brands that can have generations of loyal customers, John Higgs said.
Pricing is also a factor, vintners said.
Where big brands focus on producing grapes as inexpensively as possible at a variety of vineyards, Mid-Atlantic vineyards such as Barren Ridge work to produce quality wines at local prices, Higgs said.
Mid-Atlantic vineyards, like livestock and produce farmers, added they have seen increases in Internet sales during pandemic disruptions.
Unionville Vineyards in Ringoes, N.J., experienced overall losses of 35 percent regardless of Internet sales and New Jersey and Pennsylvania farmers’ market sales, Unionville General Manager John Cifelli said.
Cifelli has so far spent two Small Business Association Protected Paycheck Program loans that are part of the federal government’s pandemic relief efforts, he said.
At St. Michael’s Winery in St. Michael’s, Md., which procures its grapes from area vineyards, seven employees would typically work the tasting room on a Saturday, staff member Kelsey Dusock said. That number is down to two who are working reduced hours, she said.
Robert Higgs has held virtual wine tastings via Livestream and YouTube video, and loyal locals have helped to sustain the facility, his father said. Sales are nevertheless down by around 30 percent.
“The only way we can make our business succeed financially is to entice people to our winery with our views, hospitality and our history,” John Higgs said. “We rely on events and local and international visitors to allow us to compete as a local farm winery.”
Tourism, as it hesitantly restarts, could help vineyards expand loyal local clienteles. Vineyard owners said they have been advised of CDC or health department precautions related to COVID-19 in order to help ensure that the guests have a safe and pleasurable experience.
Only one-half of the population is traveling while COVID-19 pandemic concerns continue, and those who are traveling tend to be staying nearer where they reside, Virginia Tourism Corporation Brand Director Lindsey Norment said.
Travelers are also expressing a desire to avoid crowds, according to a May U.S. Travel Association survey.
The Virginia Tourism Corporation took travel habit changes such as these into account when the agency on July 15 launched a delayed marketing program that runs through October where it typically would focus on spring and fall.
The agency likewise largely targets in-state travelers, with a light emphasis on travelers from New York through North Carolina who traditionally comprise the bulk of visitors, Norment said.
The tourism corporation’s television commercials, blogs and social media efforts are centered around five themes, including small towns, hidden gems and outdoor activities that include you pick-your-own farms and agritourism facilities, she said.
The agency has within its budget also awarded $10,000 grants each to 90 district marketing organization partners such as the Shenandoah Valley and Luray Travel Associations for them to spend on marketing within the same themes, Norment said.
The Virginia Tourism Corporation did not have tourism revenue collections or occupancy rates readily available. The agency is, however, withholding one-half of this year’s marketing campaign to spend in 2021, Norment said.
The tourism corporation’s marketing efforts are under way at a time when increasing numbers of restaurants that are among local vineyard clients are permanently closing.
The Maryland Restaurant Association initially forecast that the state would by June permanently lose 25 percent of its 11,000 pre-COVID-19 eateries as a result of the pandemic, Association President Marshall Weston said.
Because the pandemic has dragged on with no end in sight, and because people are not dining out as they used to, he said, the organization has since increased that projection to 40 percent, he said.
So far, half of the industry’s 200,000-plus employees have retained, resumed or refilled positions within it, he said.