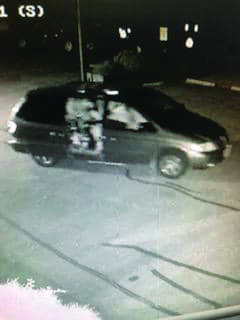 Burglars grabbed a commercial chainsaw, weed eaters, a concrete saw and other equipment from the Atlantic Tractor in Chestertown, Md., and put them into a van during the predawn hours of Aug. 27. (Photo courtesy Atlantic Tractor-Chestertown)

CHESTERTOWN, Md. — Burglars ransacked an Atlantic Tractor dealership in Kent County late last month, stealing about $12,000 worth of equipment in a matter of minutes.

“They sat outside talking about it and then put their masks on,” he said.

After breaking the store’s front window, the group entered, avoiding the door, which would have triggered an alarm. They quickly took a commercial chainsaw, weed eaters, a concrete saw and several other pieces of equipment and moved them into a van, Brice said. They left a pressure washer that didn’t fit in the vehicle before fleeing.

Several other items were damaged during the burglary. Much of the stolen merchandise was made by Stihl and was insured.

The store didn’t learn of the break-in until an employee arrived to work at about 5:45 a.m., according to a Kent County Sheriff’s Office report. Detectives continue to investigate the case. It’s the first showroom break-in Brice can recall in 25 years of employment with the company. Lawnmowers and other landscaping equipment kept outside are occasionally stolen, he said.

Since the burglary, Atlantic Tractor fixed its security system, including indoor motion sensors that didn’t trigger because the thieves didn’t move far enough into the storeroom.

“Hopefully if it ever happens again we’ll know about it,” he said.

They also circulated model numbers of all the stolen equipment to members of the regional landscaping industry in the event that they show up there. The Sheriff’s Office is asking anyone with information about the break-in to call its Criminal Investigation Division at 410-778-2279.