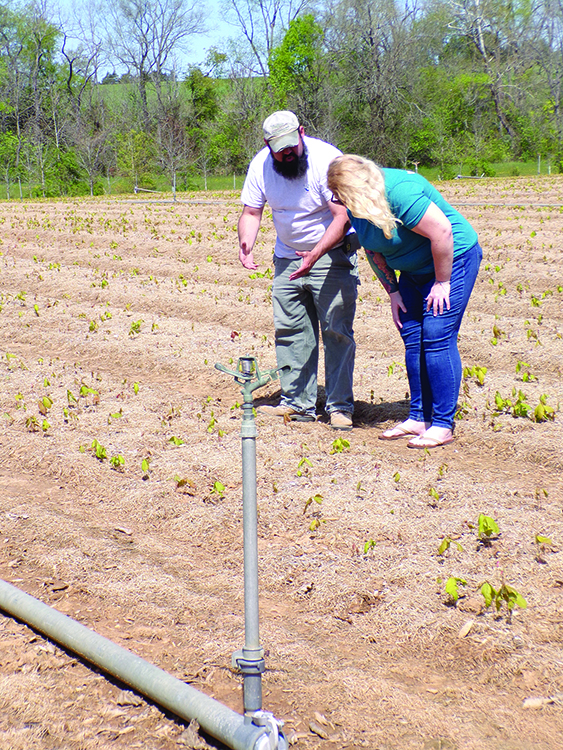 Josh McLaughan, superintendent of the Augusta Forestry Center, shows a visitor the young oak seedling that have just burst through the ground. They were planted immediately after the collection ended. (Photo by Jane W. Graham)

CRIMORA, Va. — An air of expectancy radiated across the Augusta Forestry Center here last week as 25 acres of freshly prepared soil waited to be seeded with a new crop of trees, the future of Virginia’s forests. The center covers 189 acres.
Josh McLaughlan, center superintendent part of the Virginia Department of Forestry, said normally the first week in May is his target date to plant the seeds and nuts that will be the next year’s seedlings.
However, cold soils and the prediction of heavy rain that had the potential to wash the seeds out of the ground led him to postpone planting for a week.
The sun on May 2 was doing its part to warm the soil as he showed visitors fall-seeded beds and the ones awaiting planting.
The fall varieties were mostly different kinds of oaks, he said and were planted, in part, using acorns and nuts collected by citizens across the state last fall.
These seeds are now producing next year’s hardwood seedling crop, which will be sold to Virginia’s forestland owners.
McLaughlan said that the sales of seedlings are 100 percent open to the public.
They are available beginning Oct. 1 for the fall planting season from the center, or it’s online store at buyvatrees.com.
Seedlings grown from Virginia-grown seed generally produce trees that will best thrive in our state’s climates.
McLaughlan said he likes to replicate nature in his planting efforts.
He said he began planting what had been collected and sent to the center, along with seed purchased commercially.
Seeds that dropped from trees in the spring. such as red maples are planted in spring, again following nature’s plan.
They will germinate and grow through the summer in the beds prepared for them.
McLaughlan said they plant 40 species of trees on flat land cradled below towering peaks of the Blue Ridge Mountains.
The center is bordered at one end by the South River, a tributary of the Shenandoah River.
The center has an irrigation system that covers the seedling beds.
Water is drawn from the South River at the edge of the beds by a high-volume, low-pressure induction pump.
“We care about the environment,” McLaughlan said, heading back to headquarters.
He pointed to different piles of inputs used on the seedling fields.
These included composted materials, mulch recycled from pallets and organic matter obtained from wood utility companies had cleared along its right of ways.
As with many other farm and horticulture operations in Virginia, the forestry center has to do battle with wildlife.
The most formidable are deer, crows and ravens.
The birds are partial to nuts, especially black walnuts, stealing them from the seed beds.