‘Autumn Gala’ has them dancing in Thurmont 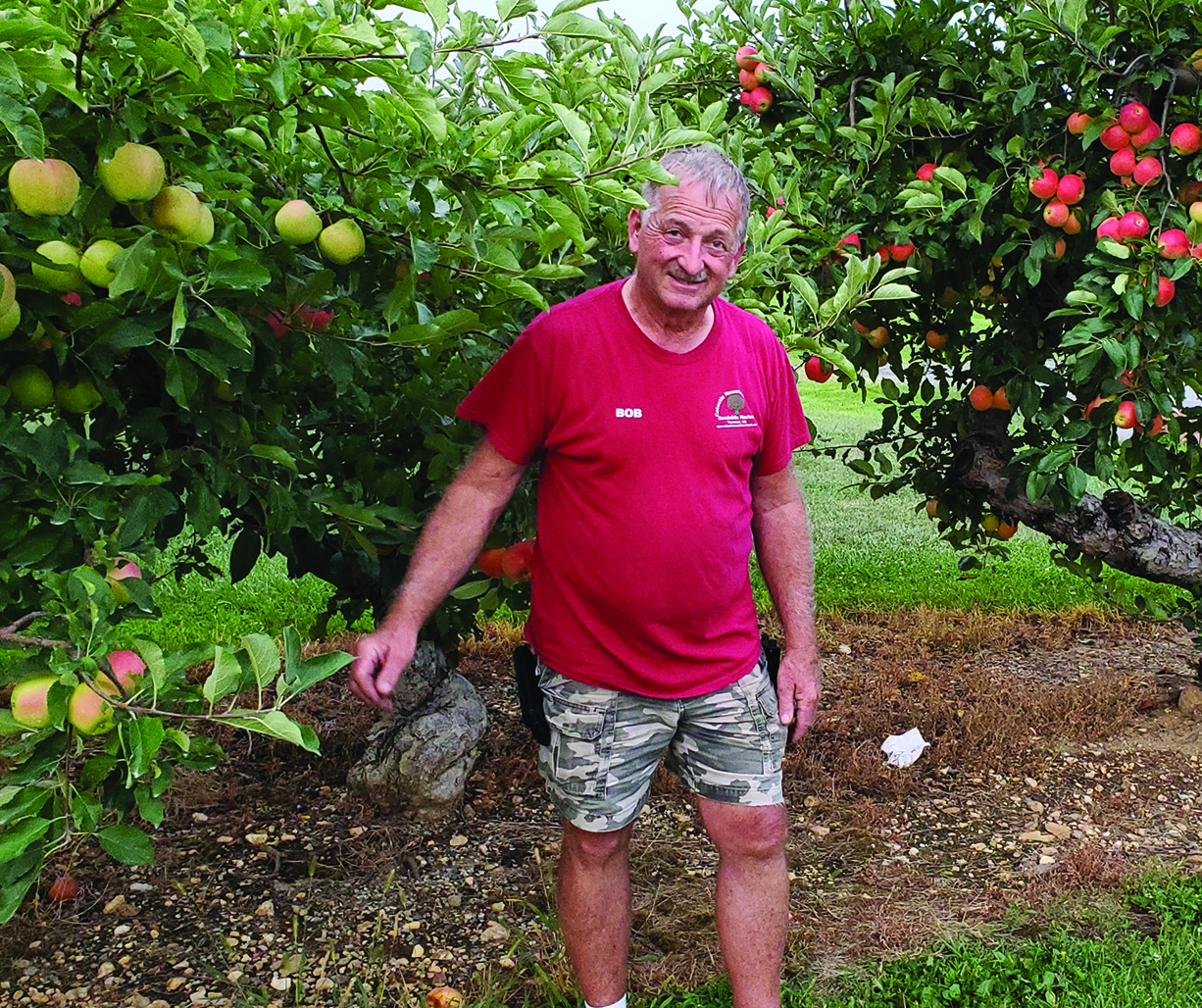 To Bob Black’s left, the greener apples are the original sport branch of later, fall-maturing Galas. Marketed as “Autumn Gala,” Black patented and named the variety “Harry Black Gala” in memory of his father, who inspired Black to experiment with apple varieties and travel to learn. (Photo by Joan M. Kasura)

THURMONT, Md. — When the editors of American Fruit Grower magazine called Robert “Bob” Black, owner of Catoctin Mountain Orchard, to tell him he had won this year’s Apple Grower of the Year award, he was totally surprised.
“I asked them, ‘Are you sure you have the right grower?’” Black said.
Others in the Mid-Atlantic region, however, were not surprised to hear Black had won.
“He’s perfect for that award,” said Tyler Butler, a third-generation member of Butler’s Orchard in Germantown, just about an hour south of Black’s family orchard.
One of the circle of longtime multi-generational friendships between the region’s family-owned orchards, Butler declared Black to be “absolutely a role model” for his generation of Millennial farmers.
“He was always encouraging us when we were growing up,” Butler continued.
Like others, Butler also noted Black’s amazing energy and zest for farming.
“We always joke that we never know when Bob sleeps,” he said.
Created 31 years ago to acknowledge nationally-recognized top growers, Gary Acuff, who is the editor of American Fruit Grower and Western Fruit Grower at the time, wrote that the annual award “recognizes apple growers who have reached outstanding levels of success through their efforts in innovative production, marketing, horticultural, and management practices.
“Winners demonstrate commitment and leadership in their field by producing high-quality fruit, being actively involved in associations, and taking a strong role in shaping the direction of the apple industry.”
Innovative certainly describes Black, who has worked with nationally-known researchers such as Dr. Tracy Leskey, a Research Entomologist with the USDA and director of the Appalachian Fruit Research Station, who for the last 11 years has been investigating ways for farmers to deal appropriately with the brown marmorated stink bug.
“I was delighted when I got the news,” said Lesky, “and not surprised that he was recognized.”
“He’s someone who’s known both nationally and regionally because of his expertise, his accessibility and his willingness to talk about both his successes and his failures,” she added.
Others, such as Brad Hollabaugh — who is a member of the family which owns Hollabaugh Bros, an orchard just outside Biglerville, Pa. — agreed with Lesky’s assessment.
“I’ve known Bob a good part of my adult life,” Hollabaugh said, “and he’s a very progressive and forward-thinking person.
“He’s always testing new varieties and trying new things.”
Hollabaugh, who was the 2000 Apple Grower of the Year, nominated Black, noting he “checked all the boxes” for the award.
“When the brown marmorated stink bug hit,” Hollabaugh explained, “Bob was very active in getting in touch with congressmen, meeting with people, and, ultimately, helping to get the funding in the farm bill for specialty crop research on it” beginning in October 2011.
Black, though, credits his father, Harry Black, who first worked for and then purchased Catoctin Mountain Orchard from a neighbor, for Black’s willingness to both experiment and travel to learn.
“Dad joined the IFTA (International Fruit Tree Association) way back and thanks to my sister, Pat, who handles the business end, I can travel and she keeps the home fires burning,” Black said.
His father’s willingness to experiment with new varieties of apples also tracks back many years to when the “University of Maryland had a little fruit stand at College Park and collaborated with the USDA,” explained Black.
“Dr. Arthur Thompson, a professor there in the Agricultural Department, noticed how customers kept coming back to buy their one fairly new apple variety and said, ‘Harry, you need to plant these Galas.’”
Planting all those Galas eventually led to a new discovery in 1995, a sport branch that matured three weeks later than all the other Gala varieties.
“I told the guys to pick all the apples, but leave the green ones on the tree,” related Black, “so, by the fourth pick, here’s these apples.”
“It was harder — firmer — than any other Gala, sweet and tasted well,” Black continued. “Dad knew about it, but told me ‘That’s just another apple, Bob.’”
Except it wasn’t.
Once they were able to grow the sport to a second generation to confirm that it was a true new variety, the family decided to patent the apple “Harry Black Gala” in memory of Black’s father.
Marketed as “Autumn Gala” to celebrate its late maturity date, Black touts the firm, sweet apple as a great variety for pick-your-own orchards.
Even at the end of August, Black said he continues to be “absolutely shocked” at the number of congratulations he’s received since the magazine’s announcement in an Aug. 4, blog post on its website.
“It’s truly an honor to be the Apple Grower of the Year and represent all the growers,” he said, “because I just think of myself as ‘Bob Black.’”