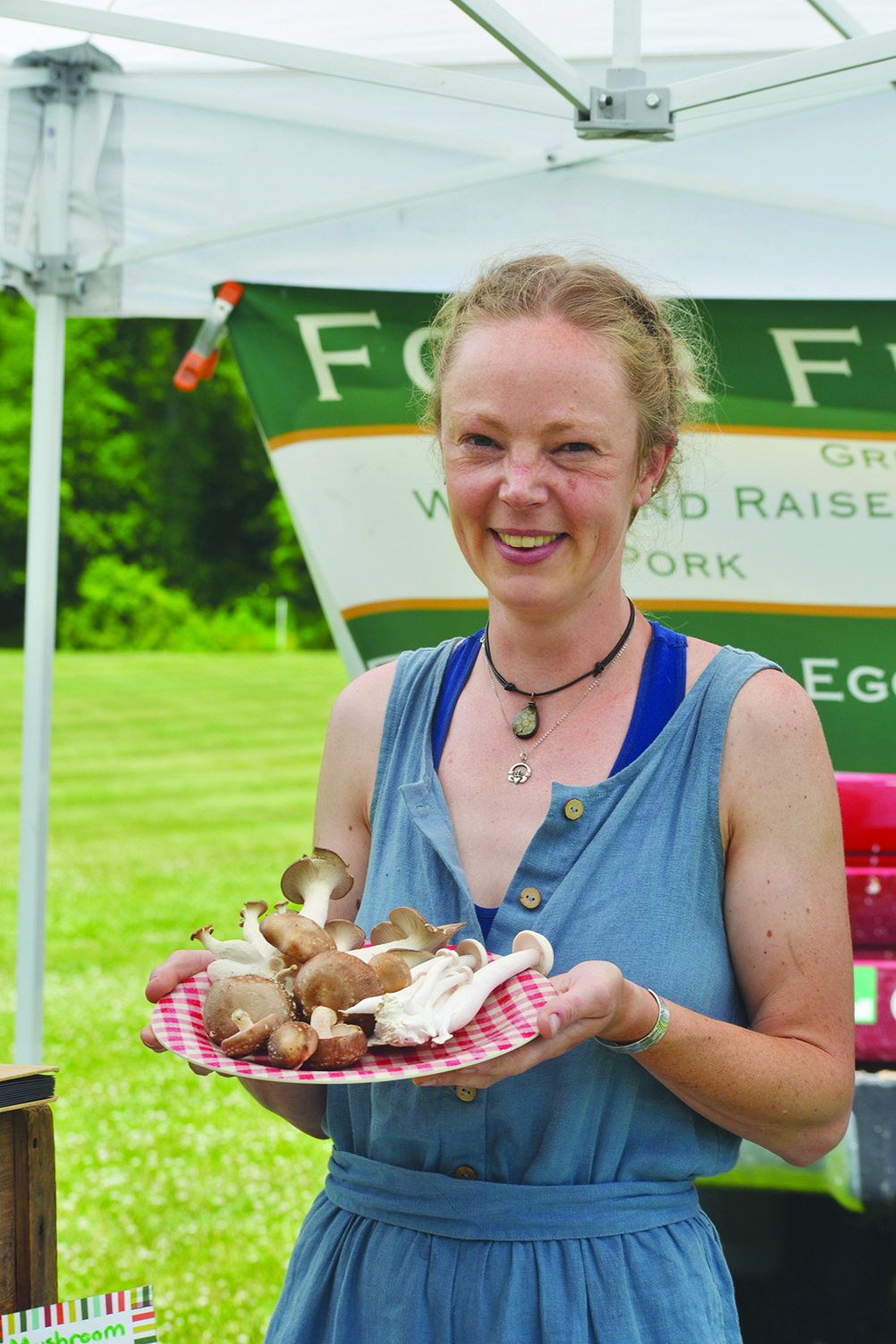 Liz Balchin stands with a plate of her mushrooms at the Chester Farmers’ Market. (Photo by Jane Primerano)

ALLAMUCHY TOWNSHIP — “Every year something unforeseen happens,” Liz Balchin said about farming.
But even for farmers, 2020 has been an “interesting” year, she said.
“There are different rules this year,” she said, but she and her partner, Ryan Lacz are having a good season at Four Fields Farm.
Balchin and Lacz credit that in part to a decision they made before the pandemic turned things upside down.
“We decided to start home deliveries in December,” Balchin said. “We would have had to change our process anyway, it was lucky we decided so early on.”
Four Fields sells pasture-raised pork, lamb and chicken as well as eggs. They use a small butcher in Pennsylvania for processing. Lacz said the use of a small processor is comforting to many of their customers who are concerned with large meat packing plants especially now. Customer worry is good for the butcher’s business.
“We have dates with the butcher for animals that have just been born,” he said. Balchin noted the butcher is booked through November. “We can’t sneak any pigs in.”
He said many of their customers have little time for shopping and many grocery stores are now doing home deliveries so they thought a small, local farm could do the same.
With the home deliveries, Balchin and Lacz are only doing two farmers’ markets this season, Stroudsburg on Saturdays and Chester on Sundays.
Balchin said she contracted with Barn2Door to host Four Fields website and online store. Barn2Doors service manages social media and newsletters for farms, sends out announcements and newsletters and provides reminders for customers. The company also helps with promotions and scheduling.
“It provides a platform for delivery and helps us with inventory,” she said.
Lacz noted it works well on mobile phones.
“We switched to them around New Year’s (Day) and we are lucky we did it early. Other farmers are just catching up,” he added. “I don’t think our previous website could have handled the way we are doing business now.”
Lacz said one good thing he hopes comes out of the pandemic is that people become more aware of where their food comes from.
Balchin said they divide their deliveries by ZIP Code. One day they will deliver to South Orange, Madison and the eastern corner of Morristown, the next the rest of Morristown and Chester, then Mendham and Bernardsville, then Stroudsburg and Delaware Water Gap.
Within five minutes of the farm they don’t charge for delivery. Otherwise the charge depends on distance.
“Most people who are close want to come and pick it up,” she noted.
Balchin and Lacz have been farming for five years, four in their current location.
“It was just land and a heap of rocks,” she laughed, describing the farm when the bought it.
They weren’t from farm backgrounds. Lacz worked at the Smithsonian Zoo and Balchin managed a gift shop, also in Washington, DC.
“We didn’t like the state of meat production, so it was farm or become vegetarian,” Balchin said.
They moved to expand their product line a few years ago.
“Mushrooms have always been a fancy of Ryan’s,” Balchin said.
They started with Shitake, inoculating 20 logs. Now they have 75 inoculated and are building an indoor space where they can grow some exotic varieties. The mushrooms have expanded their customer base, she said.
“I love mushrooms and they are easy to do, Balchin noted.