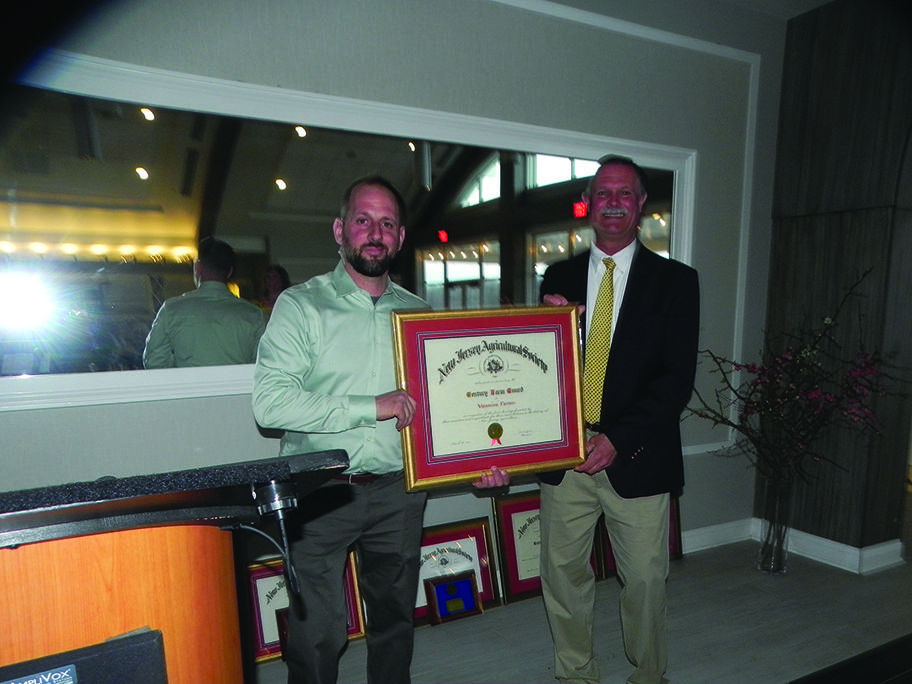 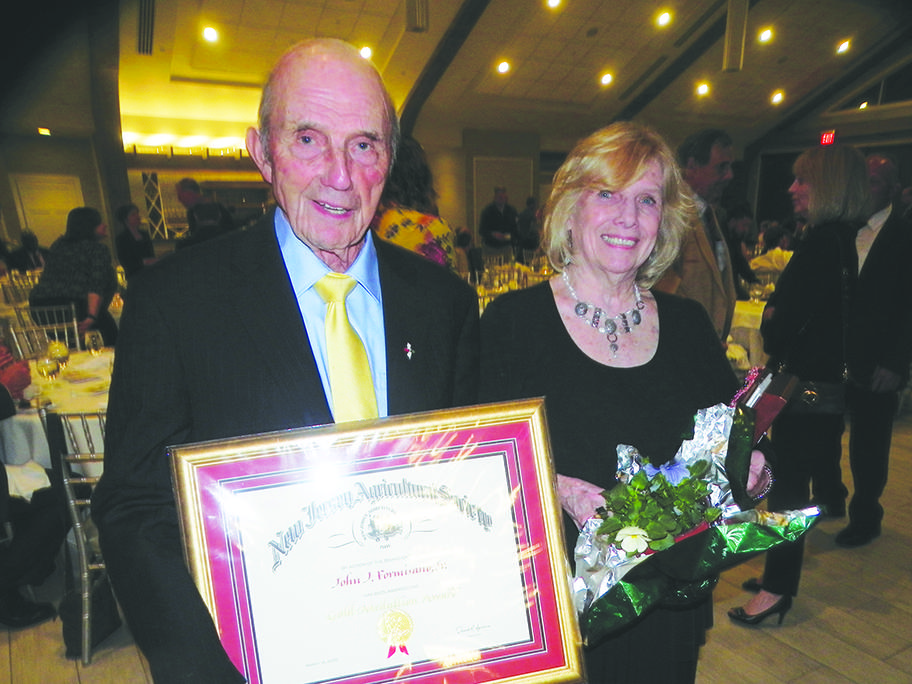 John Formisano Sr. accepted the Gold Medallion Award originally intended to be presented in March 2020 at this year’s gala. In top photo, John Vannini, left, accepted the Century Farm Award from gala emcee Dave Specca for Vannini Farms in Vineland, which was founded in 1904. (Photos by Richard Skelly) Photo by Richard Skelly

WEST WINDSOR — There are many reasons to attend the New Jersey Agricultural Society’s annual awards banquet, with the sense of community this event generates one of its most important.
This year’s gala — the first to be held in-person since the 2019 event — was a grand gathering with great speakers, good food and laughter.
Century Farm Awards were presented to Bullock Farms in Cream Ridge, and Vannini Farms in Vineland, for 2020 and 2021, respectively, and John Formisano Sr., of Buena — a familiar face to all who attend the annual Vegetable Growers Convention in Atlantic City — received the 2020 Gold Medallion Award, in-person.
In addition, a 2022 Century Farm Award was presented to the Little Farm of Wantage, Sussex County. An award for Rich and Debbie Norz of Norz Hill Farm, who could not attend, will be presented to them at a future gathering. Receiving this year’s Gold Medallion Award was former Assistant Secretary of Agriculture, Alfred Murray of Camden County.
Dave Specca of Specca You-Pick Farms in Burlington County served as emcee, and the group welcomed in the New Jersey Ag Society’s incoming director, Brook McMinn.
Funds raised from the annual dinner at the Boathouse at Mercer County Park support three key functions: Farmers Against Hunger, Learning through Gardening for elementary and middle school students, and the New Jersey Agricultural Leadership Program, established in 1995.
“The Century Award recognizes 100 years, but the Bullocks have been farming a lot longer than that, for sure,” Specca said, “it was actually Marty’s great-great grandfather who started the farm.”
“I want to thank the society for the award and the Monmouth County Board for putting the award in,” Marty Bullock said while accepting the award for Bullock Farms, based in western Monmouth County.
“We keep changing with the times. The scary part is, I’ve been around almost half of these 160 years,” Bullock said from the dais while getting his award.
John Vannini, his wife and sister Victoria picked up the award for Vannini Farms in Vineland, which began operations in 1904.
“It’s impossible to stay in this business for over 100 years without support from the ag community, so thank you to all of you,” Vannini said.
Specca noted that while he was growing up on his family’s farm, his father would often remark Specca Family Farms could never seem to be as prosperous as the Formisano’s farm.
John Formisano Sr. brought his wife, children and grandchildren and other family members and accepted his Gold Medallion Award, originally intended to be presented in March, 2020.
“I’d like to thank the society for picking me. I’d like to thank the 100-year-old people that have been ahead of me. One hundred years is a long time and, I don’t know, the way things are going right now, if all the farmers starting up who are around today can make it that long,” Formisano said.
He recalled for the audience how his grandfather came to New York in 1908 from Italy and began farming in Bergen County near Giants Stadium. From there, the family farm moved to Moonachie, another New York City suburb, before moving way south to Buena and Vineland, where land was once much less expensive.
The 2022 Century Award was presented to Martin and Harriet Little and daughters Karolee and Kelly of Little Family Farm, Wantage, Sussex County, a 110-acre facility, formerly a dairy farm that now concentrates on hay, picnic tables and firewood. In accepting his award, Little, who celebrated his 82nd birthday on March 19, noted his grandfather would be proud to know “this was still going after 100 years, and with the help of my wife Harriet and our daughters, it’s become a success.”