Be on the lookout for spotted lanternflies (Horticultural IPM) 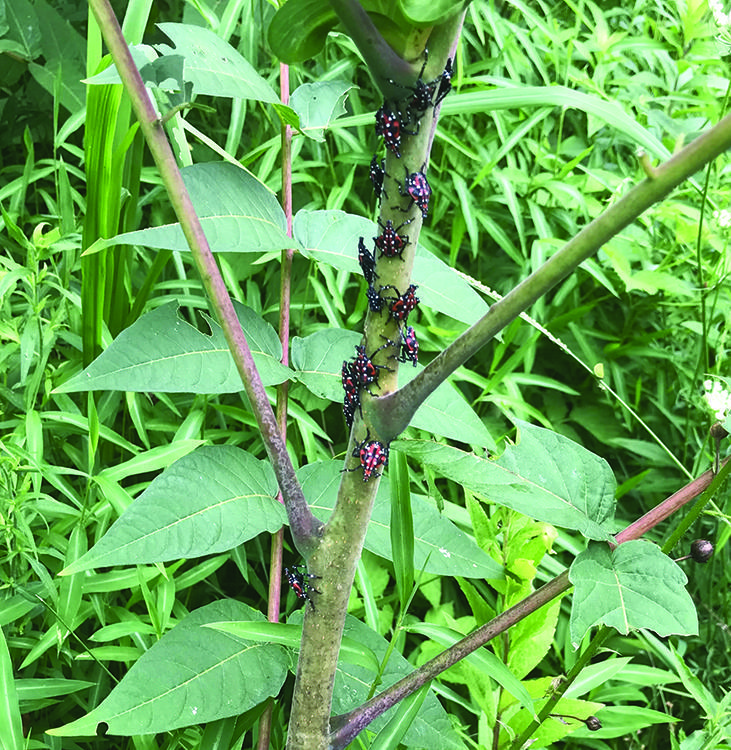 Spotted lanternfly nymphs hatch in April and go through four instars when they molt and become adults in July. (Photo courtesy Chelsey MacBride-Gill)

August is a good month to be on the lookout for spotted lanternfly adults and to make sure you are not accidently spreading this invasive pest around.
Native to eastern Asia, the spotted lanternfly (Lycorma delicatula) was likely imported on a shipment of stone to Pennsylvania in 2014.
Its preferred host plant is the Tree of Heaven (Ailanthus altissima), which was brought to North America in the 1700s and originally used as a street tree in cities since it could survive under harsh conditions.
This insect is not limited to just this host plant, but can feed on more than 100 other herbaceous and woody plants.
The spotted lanternfly is a pest of agricultural crops like apples, stone fruits, walnuts — and especially grapes.
All lifecycles of the SLF enjoy grapes, from the first instar nymph to the adult.
The nymphs prefer to feed on softer tissue on the tips of plants and are often found on the underside of leaves.
Adults will be more visible on the trunks of plants and flying around.
Researchers at Penn State University have found that adults are present in vineyards in August, but don’t build up into higher populations until mid-September.
They also found that just over half the population, mostly females, were observed at the edge of the vineyard, within the first 50 feet.
Alternative host plants can include rose, black walnut, river birch, willow, sumac, sycamore, and silver and red maples.
Researchers at Penn State have also found that the population of SLF can grow the first year, rapidly expand in the second, and be reduced in the third because the plant hopper has depleted their food source and temporarily moved to a new area.
Since SLF was first found in Pennsylvania, two-thirds of the counties have been put under quarantine. In 2018, it was found in one county in Maryland. Since then, 10 counties and Baltimore City are under quarantine.
The Virginia Department of Agriculture and Consumer Services announced recently that they were increasing the number of quarantined counties and cities in the state from four to 22.
According to the USDA, APHIS, SLF have also been reported in Connecticut, Indiana, Massachusetts, Ohio, New York and West Virginia.
Any businesses that move within or through any quarantined areas in Delaware, Maryland, New Jersey, Pennsylvania or Virginia should report sightings of SLF to their respective state departments of agriculture.
Business owners will need to have a permit showing that they have received training on how to identify and minimize the spread of the spotted lanternfly.
Adults lay egg masses in the fall, and die in the winter, producing one generation a year.
The egg masses are laid on many different surfaces including plant stems, firewood, outdoor furniture, metal posts, and stone.
The eggs remain from January to March, with the nymphs hatching in April and going through four instars, when they molt and become adults starting in July.
The first three instars have a black body with white spots, with the fourth instar becoming red with white spots from July to September.
The nymphs and adults are very active and strong jumpers.
Adults are present from July to early November, the outer wings are grey with black spots and the underwings have brightly contrasting spots of red, black and white.
The adults lay egg masses from October to December, about 1 inch long with a grey mud-like covering, which cracks over time to reveal 30-50 eggs inside.
Both the nymphs and adults pierce plant stems, trunks and leaves to suck out the sugars and nutrients from the phloem.
After digesting the plant nutrients, the planthoppers excrete the sugar, also called honeydew.
While the production of honeydew itself will not kill the host plant, high numbers of the insects sucking out the plant’s sugars and excreting honeydew onto leaves will severely weaken the plant.
All this honeydew encourages the growth of sooty mold fungi, coating leaves and fruit and slowing down photosynthesis.
The honeydew also attracts wasps and bees looking for sugar in the late summer and fall.
This affects honey production in infested areas. At a conference last year, we tried samples of honey made from SLF honeydew.
The honey produced had a smokey, slightly bitter aftertaste.
Local predators like spiders and birds will eat the nymphs and adults, but not in large enough numbers to keep the population in check by themselves.
Chemical and mechanical controls have had limited success in temporarily reducing populations at some affected sites.
The most effective chemical control was a systemic like Dinotefuran used as a soil drench, trunk spray or trunk injection.
The University of Maryland Extension and the University of Delaware Extension are also doing research into systemics to use against the spotted lanternfly.
If you have insect or plant problem perplexing, can you send us an e-mail at dfplantquestions@gmail.com.