Because of drought, Dieker shuts down stand 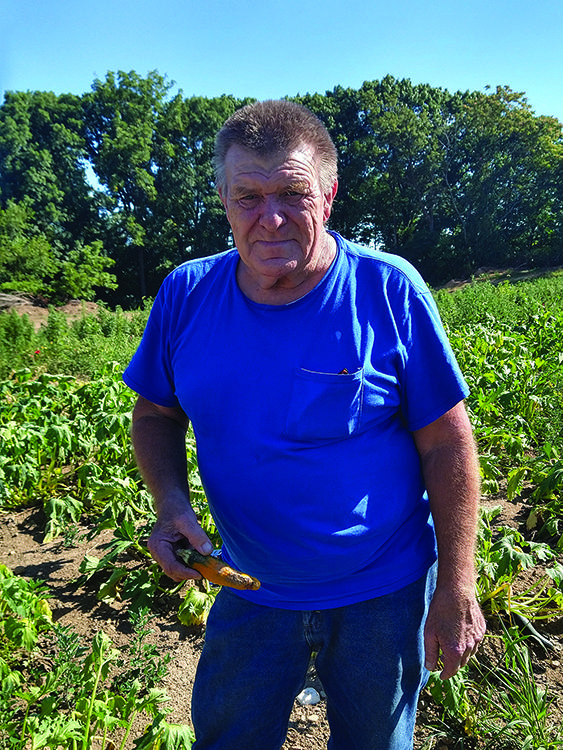 On Aug. 1, Jim Dieker made the difficult decision to close his popular farm stand. Lack of any substantial rain since mid-June was the number one factor, he said. (Photo by Richard Skelly)

SAYREVILLE — Veteran suburban farmer Jim Dieker was raised in the 1911 sturdy white concrete house he still occupies on Bordentown Avenue here on the South Amboy-Sayreville border. Normally each summer, thousands of patrons frequent his ultra-busy farm stand here on one of the state’s oldest roads, running from waterfronts in Perth Amboy to waterfronts in Trenton and Bordentown. He employs the Cruz brothers from South Amboy and their wives and a few other people from the neighborhood to grow crops on his land and to work the retail stand.
This year on Aug. 1, Dieker made the difficult decision to close his popular farm stand.
Lack of any substantial rain since mid-June was the number one factor, he said.
“I do have access [via a hydrant at curbside] to city water here, but it’s too expensive,” he added. “The business administrator came by the week I closed the stand and said that they could provide me with water, but by that point it was already too late. It was very touching.
“They offered me a tie-in to the hydrant but it was already four weeks too late. The business administrator came into my yard. He said, ‘You’re a big part of the heritage of Sayreville, and we can’t have you slip through the cracks, we’ve got to have you here and open.’”
The Cruz brothers, talented growers from Mexico who’ve been working with Dieker for two decades, took jobs installing drywall instead for the rest of the summer.
Dieker’s wife, Jean, passed away in November, 2019, so with a team of four or five people, he oversees growing and harvesting operations on his combined 16 acres, two large fields surrounded by suburban streets and homes.
Neighbors were familiar with the Cruz brothers and their farm machinery that would make their way past their houses and around stop signs to get to the other patch of seven acres.
“This year, everything just came together at once. It was the worst combination you could ask: no rain here since June 17, and then it would rain the next couple towns over in Old Bridge or Matawan, but not here, the rain kept missing us.”
“Normally, we’d be finishing up in the hoop houses now taking seedlings out, but the ground has been so hard you couldn’t get the plows in the ground to transplant anything,” he said.
Too many of his seedlings were scalded and stunted, he said, “and the bees weren’t pollinating because they were also looking for water, and when they weren’t looking for water, they were fanning the queen to keep her cool. I could just see them all hanging out in front of the hive, fanning the queen. They weren’t into any of the squashes or anything, so at that point I knew I wasn’t going to have much of a fall crop.”
In a normal year Dieker and crew grow 10 to 15 varieties of tomatoes, more than 15 varieties of peppers, many varieties of eggplant, cabbage, summer and fall squash, beans cucumbers and peas. Like many smaller farmers, he buys his corn much of the time from other farmers in the area.
“The peas were gone by the time the dry weather came in,” Dieker related, “and we couldn’t put a second crop of anything in the ground, it was just too hard and dry.”
“By the 4th of July we usually have some rain but I was concerned by then. I could almost see it coming. This drought is very strange in that it seems so localized.”
Dieker’s Farm enjoys patrons from Sayreville, about 50,000 people, and South Amboy, another 12,000 residents, and he maintains a Facebook page for the farm stand with the help of a younger aide.
“I put it on the Facebook page that we were closing the farm stand. I was getting a lot of calls. It was a tough decision to make, but everything was pointing at it.”
“The only time we ever closed before was the week after Hurricane Sandy hit, because we had no lights in the building and no power for the following week.”
Dieker, 65, recalls droughts in 1964, 1988, 1999 and 2002. He always supplemented his farm income when his parents were still around by working as a machinist and welder at the nearby South Amboy boat works.
“Who knew?” Dieker said in reflection of this year’s situation. “If I didn’t know, how would the business administrator know? I thought it was awfully nice of them to come by and offer me water.”