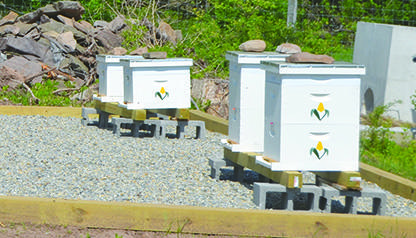 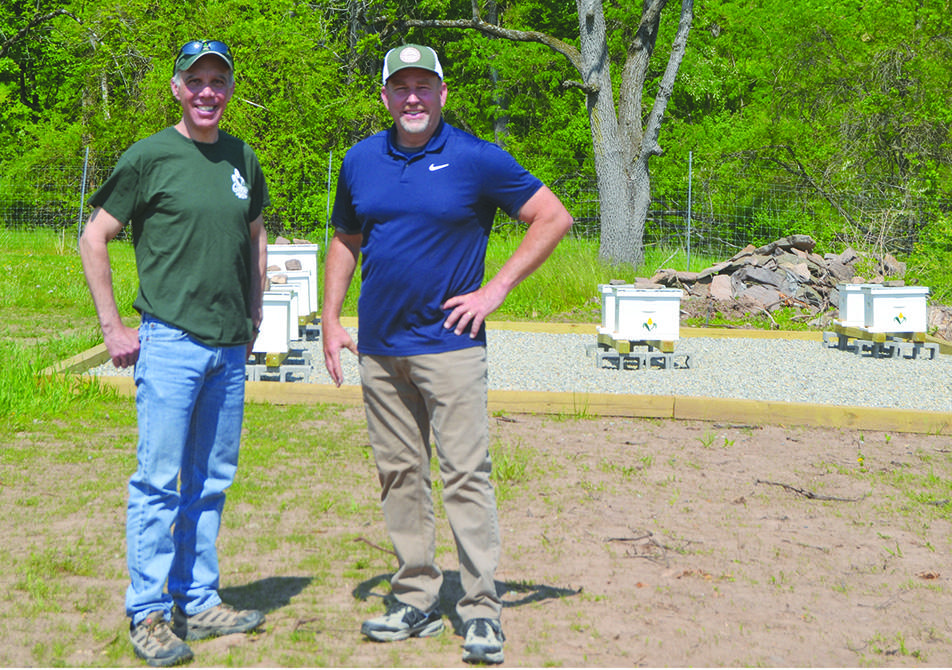 From left, Chip Paillex of America’s Grow a Row and beekeeper hobbyist John Knoble in front of the hives on Pittstown farm. (Photo Jane Primerano)

PITTSTOWN — Chip Paillex of America’s Grow-a-Row noticed a drop-off in apple production after a beekeeper took his 10 hives off the original AGAR farm here.
Paillex mentioned that to John Knoble, a volunteer who came to harvest corn with a contingent from Johnson & Johnson.
Knoble is a hobby beekeeper and he offered to bring some hives back to the farm.
Funded by grant money from Shop-Rite/Wakefern Foods and General Mills, Knoble acquired 10 bee packs of 10,000 bees each from Georgia.
Knoble said the he sought advice from the Northwest New Jersey Beekeepers Association and Hawk’s Hollow Honey in Milford when setting up the hives.
AGAR enlisted scouts from Boy Scout troops 65 from Ringoes, 194 from Flemington and 186 and 186G from Three Bridges/Readington Township to put the hives together and paint them. Paillex said the scouts have done many other volunteer projects on the two AGAR farms.
Knoble said the goal is 80,000 or more bees per hive. He will add a second level as the bee population grows.
He explained when acquiring bees, “you’ve got to go where the supply is.”
He said he is checking on the hives twice a week to make sure they have the right resources to survive this far north.
While Paillex is most concerned about increasing apple production back to the level before the first hives were taken out, he believes many other crops will benefit from the return of the pollinators.
He said he created a quarter-acre pollinator garden on the farm.
He won’t use any of the honey the bees produce this year, leaving it so they have plenty of nutrition to overwinter, he said.
Shortly after Paillex introduced the bees to the press, the Comcast NBCUniversal Foundation announced AGAR is one of eight local non-profit organizations in each of 11 television markets to receive a grant.
Each market receives $315,000 of a national fund of $3,475,000.
AGAR’s grant is $50,000.