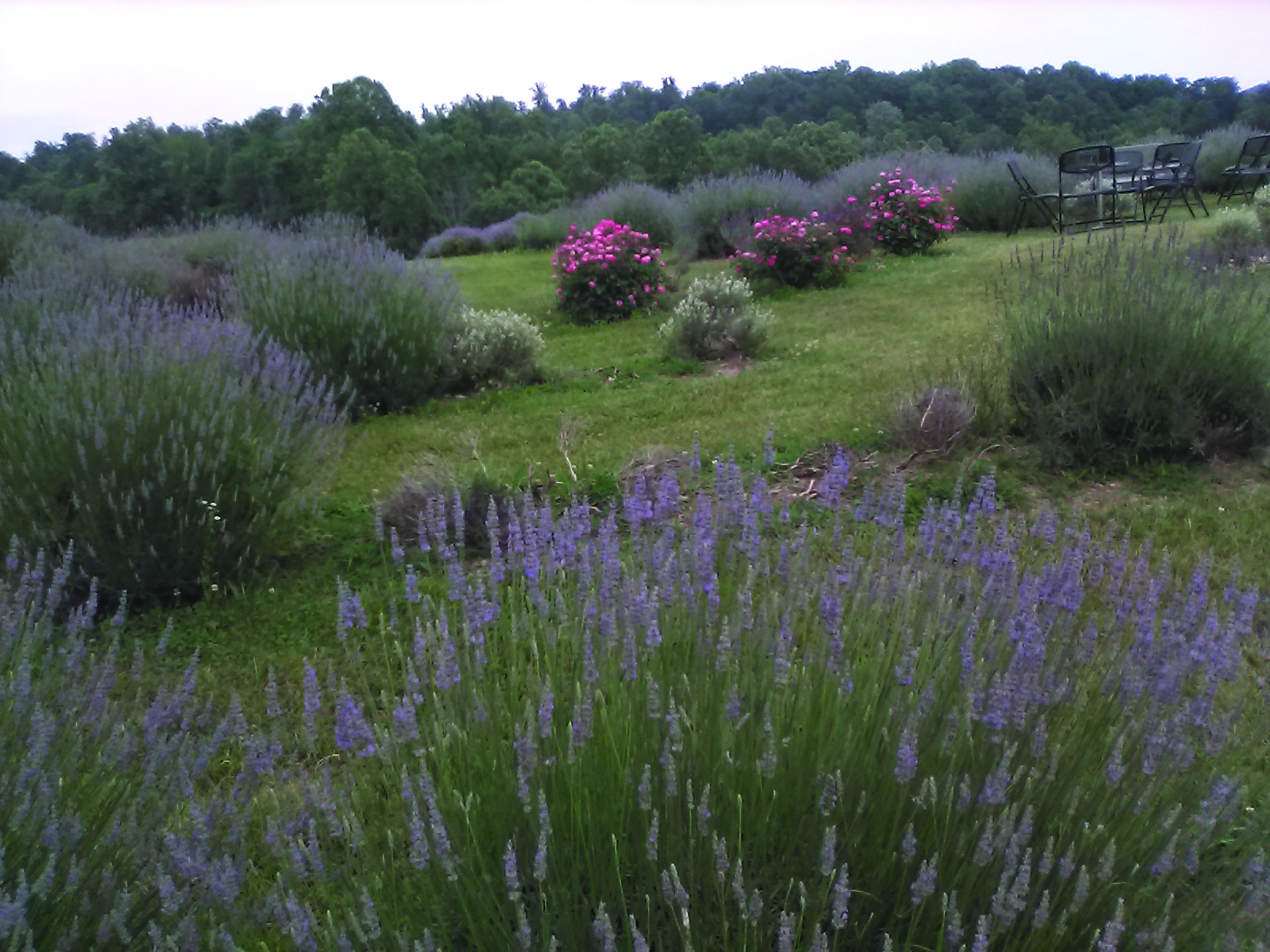 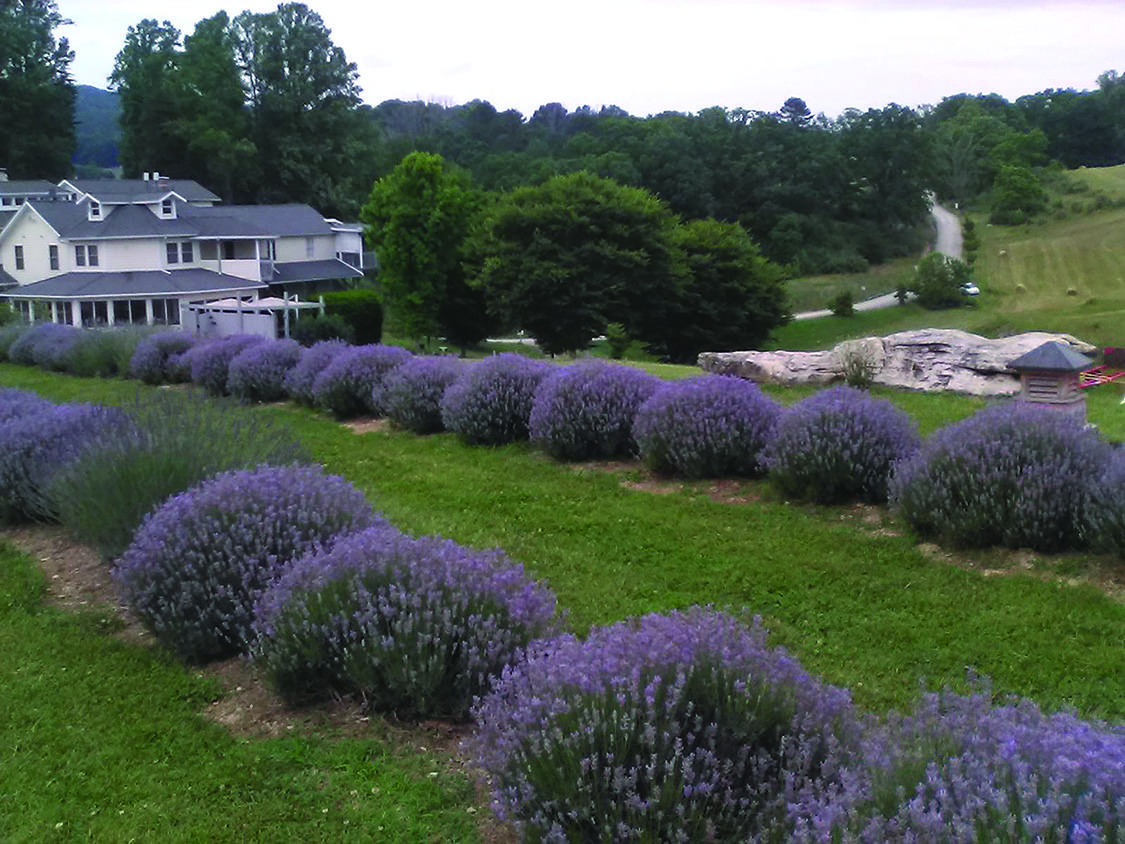 Joyce Beliveau created a long, green aisle bordered on both sides by well-rounded and groomed lavender plants from the main buildings at the foot of a hill to the wedding site at the top of the hill. “Many a bride has walked up the lavender path,” Joyce said. (Photos by Jane W. Graham)

BLACKSBURG, Va. — In early fall, Beliveau Farm is gearing up for grape harvest in its vineyard, but there’s already been a lot of activity on the farm in the summer since the farm owners added lavender years ago.
When the lavender begins to bloom at Beliveau Farm in early June the pace of life increases. By July 1, the lavender is in full bloom and calling to those who love this herb with European origins.
The farm began in 2001 when Yvan and Joyce Beliveau first saw the property and realized it was where they wanted to live their dream of planting a vineyard and opening a winery.
Lavender joined grapes as a Beliveau Farm crop in 2005 and has been incorporated into many of the farm’s offerings through the years. In addition to the vineyard and winery the farm runs a bed and breakfast, a wedding and event venue and a gluten-free brewery.
“Because I like it,” Joyce replied when asked why she began growing the herb. “Lavender can be used all across the food spectrum from savory to sweet. I harvest early lavender when it first starts to bloom, usually in early June for a culinary grade.”
Some of the foods she listed included lavender chicken salad, lavender pizza, a first time offering of a pork taco with lavender barbeque sauce and lavender cole slaw. Sweets flavored with lavender include ice cream, whipped cream, short cake, cupcakes and chocolates.
Joyce said the oils in lavender are soft when the herb begins to bloom making them best for culinary use. As the season progresses the oils become more intense on the longer stems.
These early oils are also used at Beliveau Farm to create their lavender lemonade, lavender wine cocktail, lavender beer, and lavender gluten-free beer.
Lavender is a nice fit on the farm’s hillsides, Joyce said. The plant native to the Mediterranean likes full sunlight and well-drained soils that are neutral to slightly alkaline.
She said she buys hardy varieties from local suppliers and said most plant sellers will probably stock these varieties. The plants can also be grown from seed or propagated from existing plants.
She said those who chose to propagate bend a stem down to the ground from a parent plant but do not cut it off. Rather, they cover the stem with soil and allow it to root during the winter.
The new plant can then be transplanted.
Pruning is an important part of cultivating lavender, Joyce said. It keeps the plants from becoming too woody and prolongs their life.
Lavender plays a very important in creating the atmosphere for Beliveau’s wedding venue.
Joyce created a long green aisle bordered on both sides by well-rounded and groomed lavender plants from the main buildings at the foot of a hill to the wedding site at the top of the hill.
“Many a bride has walked up the lavender path,” Joyce said.
Lavender and roses grow across the hillside and in another location on the farm as well.
The farm’s annual Lavender Festival takes places over several weekends in June and July. Joyce said it is a great opportunity for the farm to market its many products. Numerous vendors come in as well, bringing in lavender related products not created on the farm.
Joyce said they harvest all the buds from the plants and dry them to be used in sachets and potpourri. They are available by the cup, bag-full, or even in bulk for people who want to use them in crafts.
They sell the lavender stems for use in fires or for flavoring food on the grill. They also sell bundles of lavender throughout the season.
Lavender lore presents it as a plant that represents purity, devotion, serenity, grace and calmness.
Visitors to Beliveau Farm may find some of these.
Joyce said the plant is known for its calming and soothing capabilities. Two key substances account for this.
Linalool has been documented to soothe the neurotransmitters in the brain and Terpenes has been identified as having antiseptic qualities and has been used thorough the ages to treat bruises and burns.
She noted that some people cannot tolerate lavender oil as it is very strong and suggests diluting it with olive oil if there is a skin reaction.