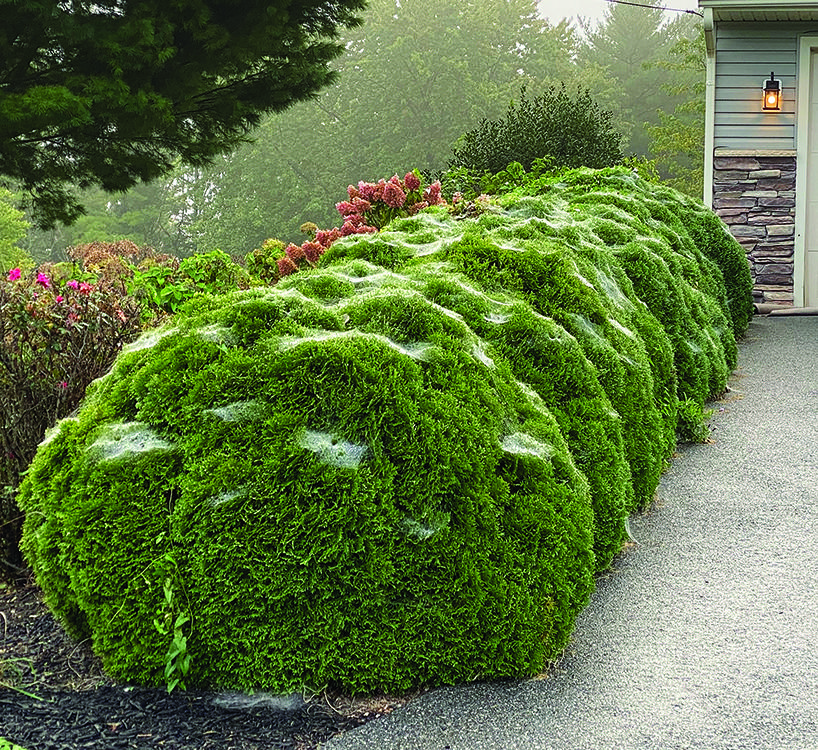 In the late summer many people notice a large number of native spiders active in their landscape, such as these orb spider webs on boxwoods. (Photo by Stanton Gill)

Most people have a natural fear of spiders but as a group, they are one of the most beneficial arthropods you find in the landscape.
As a grower you appreciate help when there is a lot of work to do.
There are many beneficial predators at this time of year and they can assist you in reducing the number of insect pests in your landscape.
Spiders, members of the Araneidae family, are found in many locations and can be found on the ground, in grasses, plants, or trees. Spiders are general predators, eating a variety of insects, arthropods, and other spiders.
They can be groups into a few broad categories based on their hunting methods; including hunting and ambush spiders, and web spinners.
Hunting spiders include wolf and jumping spiders, who have good eyesight to target their prey, but don’t construct a large web like web spinners to catch prey. Web spinners include orb spiders and garden spiders.
The third group, ambush spiders, wait on flowers or plants for prey to approach. Both spiderlings and adult spiders come in a range of sizes, colors, and with body markings.
One type of web spinner that has received attention recently is the Jorō spider, native to Japan, Korea, and China.
The spiders, Trichonephila clavata, were accidently introduced to the southeast on shipping containers or potted plant material. They were first reported in northern Georgia in 2014, and have since spread to neighboring states.
Jorō spiders have not been found in Maryland, Delaware, or Pennsylvania yet, but even when they do arrive, they will be another beneficial arthropod that helps to keep plant damaging insects under control.
Researchers have found that the Jorō spiders can survive in cooler climates after comparing their metabolism with a close cousin, the golden silk spider, which has lived in the southeast United States for the past century.
The spiders can travel to new areas in multiple ways. The adults can move to new territory, people can accidently move them, and young spiders can put out silk webbing to act like a balloon and let the wind carry them. The spiderlings can travel tens to hundreds of miles, if they are picked up by strong winds or a storm.
The adult female Jorō spiders make large webs that can be up to ten feet wide. The female spiders are up to three inches long overall, with bright yellow stripes on their abdomen and yellow and black bands on their legs. The males are about half the size of the females and duller colored.
The males don’t make their own webs, but hang around the edge of a female’s web. The females spin an egg sack in the fall, with several hundred eggs inside, and the adults die soon after.
The egg sack is attached to leaves, twigs, or human structures with the spiderlings emerging in the late spring or early summer.
The Jorō spiders have weak venom and small fangs, which have trouble piercing human skin.
They are more interested in finding insect prey than bothering humans, despite their sometimes alarming appearance.
In the late summer many people notice a large number of native spiders active in their landscape. This is usually garden spiders (Argiope spp.), which have a somewhat similar appearance to Jorō spiders, but are smaller sized, and often construct a zigzag pattern into their webs.
There are five species in North America, and two live all around the country – black and yellow garden spiders (Argiope aurantia), and banded garden spiders (Argiope trifasciata). The other three species live in the south and west in warmer climates.
If you have insect or plant problem perplexing you send us an email at dfplantquestions@gmail.com.