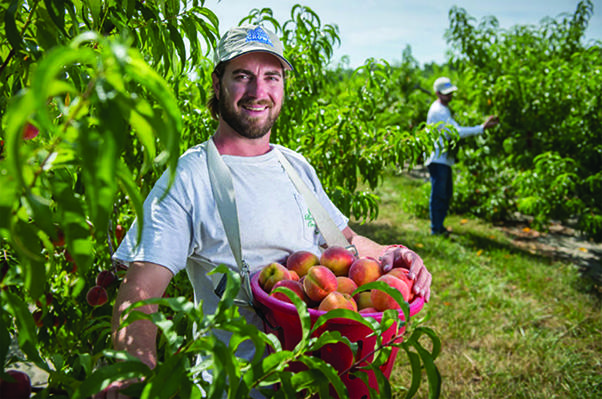 FRANKFORD, Del. — Henry Bennett is a sixth-generation farmer at Bennett Orchards. He’s a native of Sussex County.
While still young, the Sussex County native worked with family members at their pick-your-own stand on the farm, and after he got his drivers license, he helped sell farm-grown produce at area farmers markets.
He graduated from Indian River High School in 2008. Four years later, in 2012, Bennett graduated from the University of San Diego with a degree in Business and Spanish. He returned to Delaware and helps run Bennett Orchards.
Located in an Agricultural Preservation District, Bennett Orchards is recognized as one of the First State’s Century Farms.
“The farmhouse on the property was built in the 1850s when the farm was the seat of a complex consisting of a water-powered gristmill and sawmill known as ‘Baltimore Mills,’” according to the farm’s website. “The mill complex dates to the 1780s and is on the National Register of Historic Places.”
Peach trees were planted on 25 acres to create the fruit orchard in 1983, with the farm’s pick-your-own operations beginning in 1987. Blueberry bushes were planted in 2011, with harvest beginning in 2014.
Through the years, the family has continued to plant new trees and bushes to replenish the orchards. On average, Bennett said peach trees have a lifespan of about 15 years, while blueberry plants can live for 50 to 60 years
Today, Bennett Orchards includes a total of 250 acres, with about 60 acres of peach trees and more than eight acres of blueberry bushes.
The farm grows 15 different varieties of yellow peaches, a variety of white peaches, and a variety of nectarines grown here as well as ten varieties of blueberry plants.
Both the peaches and blueberries grown here are sold under the “Bennett” brand name.
Some of the other acreage is used for timber production and the growing of grain crops, with some of the land left in its natural state.
Bennett said that the location of Bennett Orchards is one of key aspects of its success.
In particular, he cited the climate and soil of the Delmarva that makes this area ideal for the growing of peaches and blueberries.
In addition, the geographic location allows Bennett Orchards to be able to sell its produce in the freshest possible ways. Some of the peaches and blueberries are sold directly to consumers through local farmers markets, while other produce is picked directly by customers visiting the farm.
“We are focused on sales locally on the Delmarva Peninsula,” said Bennett. “We only sell what we grow through local farmers markets and pick-your-own at our historic farmstead.”
For people who come to Bennett Orchards, they have the opportunity to pick their own peaches and blueberries when the produce is in season. He stated that for blueberries, that’s usually from early June to mid-July. For peaches, it’s typically from July 4 to Labor Day. Pricing is based on customers buying a minimum of ten pounds of peaches or four pounds of blueberries.
“We’re only seven miles from Bethany Beach,” he said. “We’re about 20 minutes from Rehoboth Beach and about the same from Ocean City, Md.
“We’re a perfect day trip for people visiting the beaches. The seasons for our peaches and our blueberries overlap with the time when the beaches are busy.”
“We have a long history of peach production,” said Bennett. “We can pick the peaches in the morning and get the crop to markets within 30 minutes of our farm…We are the largest blueberry grower on Delmarva. We are currently the only farm in Sussex County to pick and package our blueberries. We invested in a state of the art blueberry grading line to package our berries into pints.”
He said that blueberry production increased 20 percent in 2021 from 2020.
“We had some plants coming into production for the first time last summer so that boosted our poundage. We hope to be similar to last season or a bit higher due to our new block of blueberry plants coming into production.”
Among sustainability practices utilized by Bennett Orchards are crop rotation and the use of cover crops, drip irrigation systems among the peach trees and blueberry bushes, and Integrated Pest Management techniques, among other practices.
“We take a lot of pride in people enjoying our peaches and blueberries,” he explained. “When we see someone bite into one of our peaches or eat a handful of blueberries, it’s instant job satisfaction for us.”