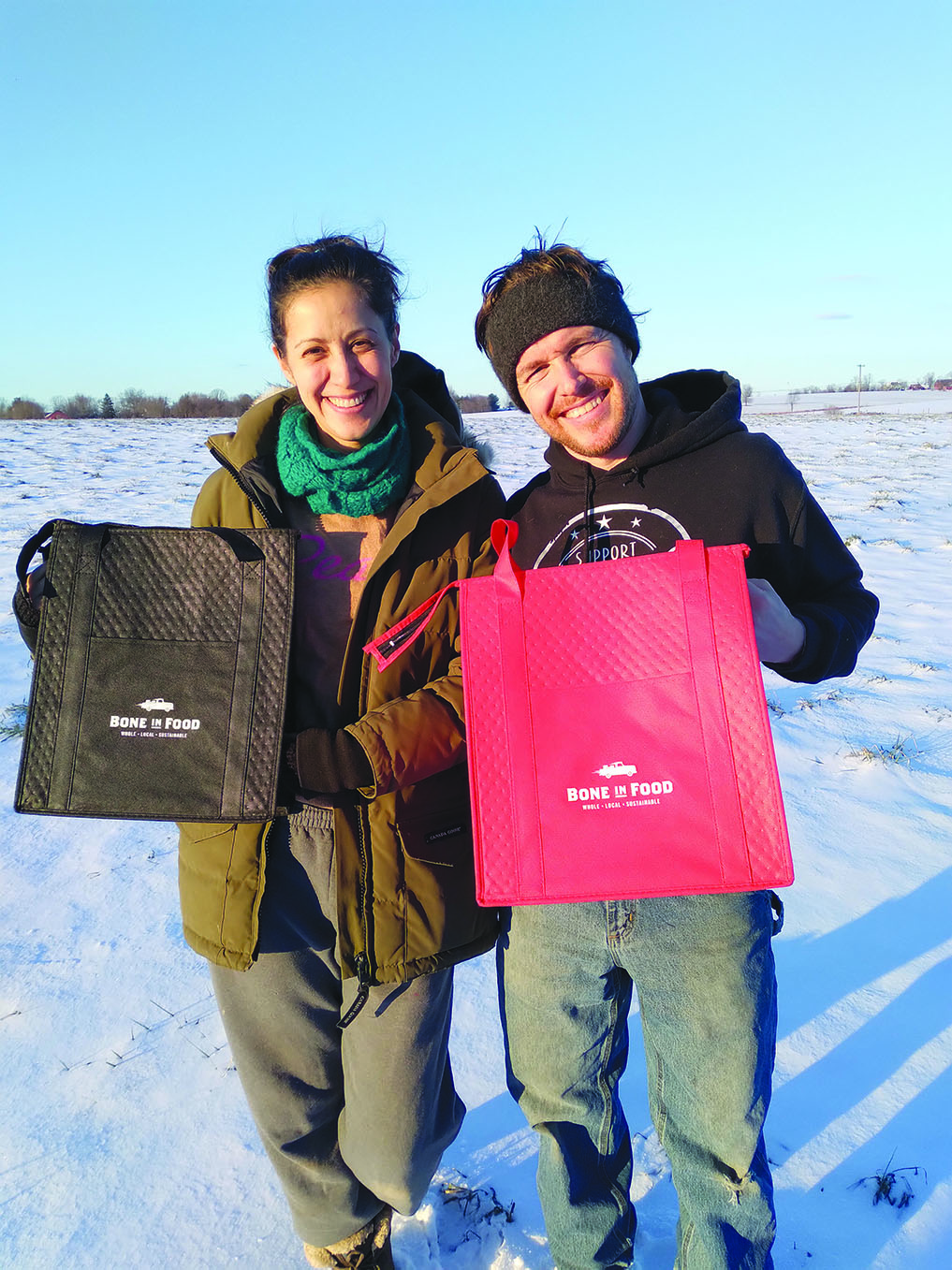 Virginia and Ron Mirante started Bone-In Foods in 2013 on the popularity of their chicken and beef bone broths initially made to help Ron fight an auto-immune disorder. (Photo by Richard Skelly)

HILLSBOROGH — It was some enlightened self-interest that led Ron Mirante to form his small business, Bone-In Food.
Mirante specializes in home delivery of CSA shares to people who buy into his program.
Mirante and his wife Virginia launched Bone-In Food in 2013, in Jersey City, after Mirante suffered repeated hospitalizations and expensive treatments for a mysterious auto-immune disorder.
Their signature products include healthy beef and chicken bone broth. They started working the provisional side of it, working with area organic farmers, in 2015. Soon after that, they left Jersey City with their young son and moved their home and office to Hopewell to be closer to the network of farmers they work with.
“We’re evolving,” Mirante said, “we started the business because I had come down with a debilitating auto-immune disorder and addressing the underlying issues was difficult with pharmaceuticals.”
He majored in Landscape Design and minored in Sustainable Agriculture at Rutgers’ School of Environmental and Biological Sciences in New Brunswick. He graduated in 2004.
Mirante, now 38, was 30 when he was diagnosed and he tired of conventional medicinal approaches and antibiotics and steroids quickly.
Mirante said his auto-immune condition was a very bad rheumatic arthritis that wreaked havoc on his muscle tissue, soft tissue and connective tissue. It became serious when it attacked his pericardium, or the sack around the heart.
“I started having issues breathing, getting up and down flights of stairs and the treatments were very expensive,” he said, adding, “right now, auto-immune conditions are just wreaking havoc amongst the public it’s one of the least spoken about forms of chronic disease.” At one point he had a 104 degree fever that lasted for 35 days.
The concept for Bone-In Food is simple: gather up good fresh food from local organic growers and deliver it to people’s homes.
Initially, in Jersey City, he said, “it was just me and my wife and then we expanded to two part-timers up until the pandemic. Now we reached our two year sales goal in the month of April.”
To be sure the COVID-19 pandemic has brought a lot of new customers to his business. “We sustained our business because when we started it we were living in Jersey City, and most of our buyers, 75 percent of them, were city buyers and we didn’t move out to Hopewell here ‘til about three years ago, to simplify logistics.”
At the point he started Bone-In Food in 2013 he had to quit his job and take care of his health. Slowly he began to build a following for his chicken and beef bone broths and other products.
“We were cooking out of our home initially for friends and neighbors and within a few months we were getting 60 orders a week, so that wasn’t sustainable for the New Jersey Health Department, so then we moved operations into a certified commercial kitchen,” he said. These days, Mirante and his crew run their business out of two locations with certified commercial kitchens.
Starting in 2014, Mirante began to find farmers to grow produce for the business. After purchasing a small delivery truck and word continued to get out about Bone-In Food, he was able to expand his client list into nine counties after they moved Bone-In Food to its Hillsborough and Hopewell bases.
As of January 2021, Bone-In Food is making deliveries of fresh organic fruits, vegetables, pasture-raised meats and its own products like bone broth to clients in 14 counties.
Bone-In Food now has sales and distribution partnerships with Ironbound Farm, Double Brook Farms, Green Flash Farms, Rivereen Ranch [a water buffalo farmer in Asbury in west Jersey,] Terhune Orchards, Zell’s Farm, Rolling Hills Farm, Nature’s Own, Pittstown Poultry, Dogwood Farms, Four Brothers Farm, and Mike’s Blueberry Farm in Pemberton, among others.
Looking ahead, Mirante said “we’re going to try to accommodate more growth, as we’ve had to put more of our prepared food dishes [prepared in commercial kitchens like John McConnaughey’s Red Barn Dairy,] on hold for now.”
With all the growth since the pandemic hit in March, Bone-In Food now has three part-time and two full-time employees, including a head chef.
“All of these people are passionate about what they’re doing, and so are we,” he said. Future plans include having some outdoor events near their assembly and load out building at Lima’s Farm in Hillsborough, assuming it’s safe to proceed with these things by the summer of 2021.
“Now I’m focusing on developing more relationships with other organic farmers and that’s helping to maintain the health of the business.”