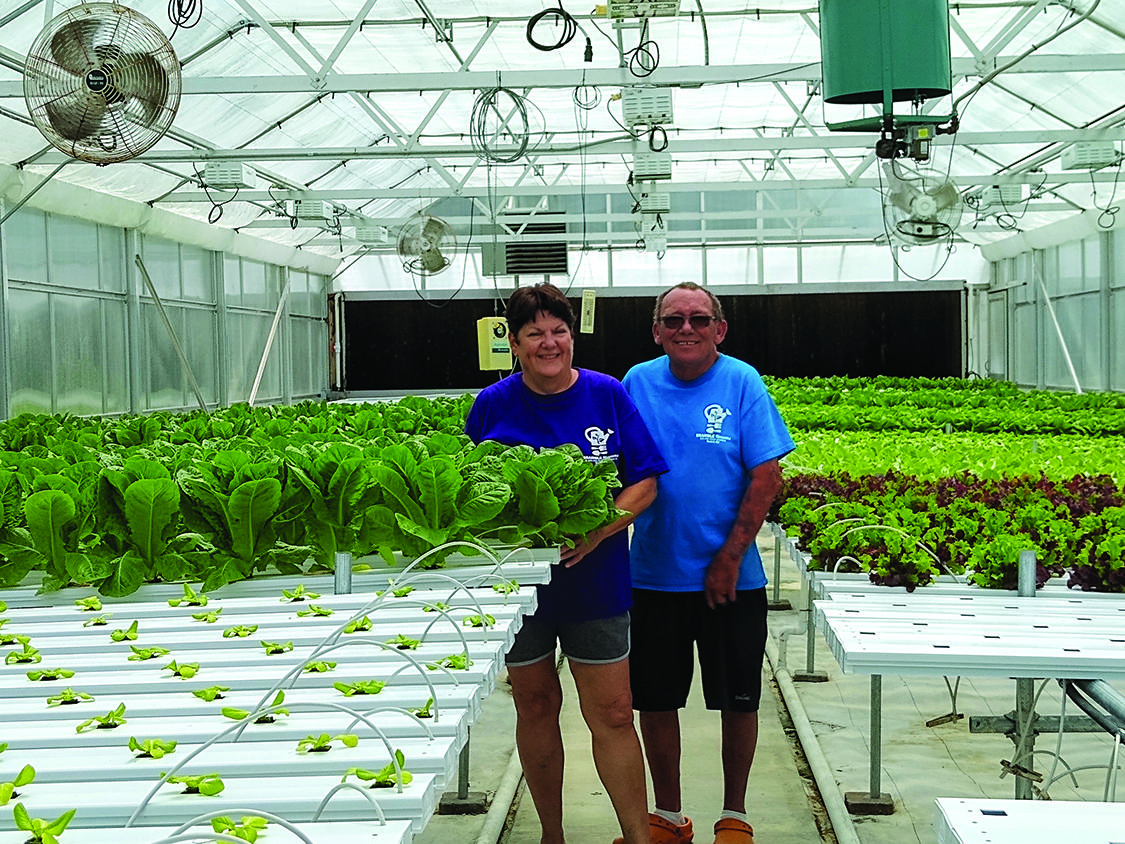 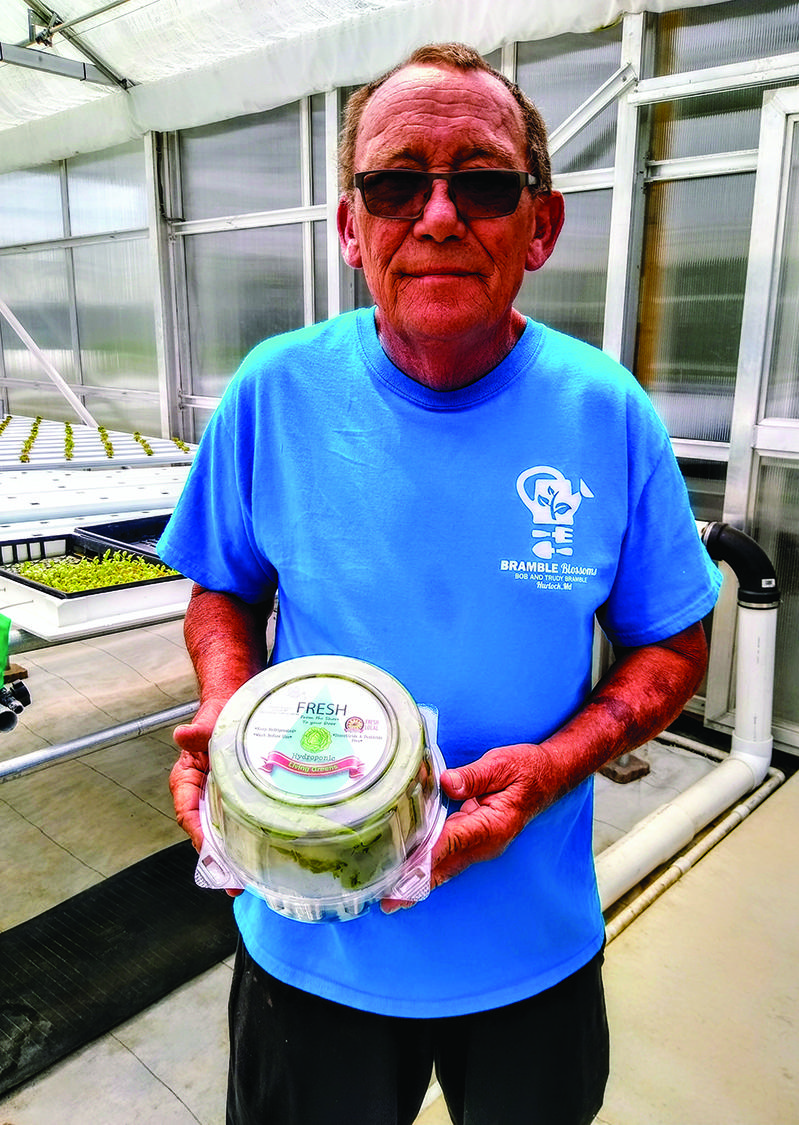 HURLOCK, Md. — Full-time nurse Trudy Bramble grew up on a farm. So, when she and husband Bob built their first greenhouse in 2004 and began raising annuals and bedding plants, she knew a thing or two about bringing soil-raised plants to life.
That business, Bramble Blossoms, stays whirlwind busy each January through May nurturing bedding plants and hanging baskets as part of Bell Nursery’s network of growers which supply “big box” stores such as Home Depot across the United States. By March, the Brambles have cultivated a half acre of flowers.
Since 2016, Trudy and Bob have expanded their family farm business without increasing their soil footprint by creating a new 3,000 square foot state of the art greenhouse dedicated to hydroponic lettuce and greens production.
Wanting to invest in something that would create a year-round venture, the Brambles spent several years discussing and researching, reading books, and checking in with the state of Maryland, which recommended getting Good Agricultural Practices certified, a food safety “seal of approval” increasingly required by buyers.
Eager to acquire the GAP certification, Bob said he soon learned that he would need to dive head-first into the growing process first.
Excited to begin, he said he started planting 1,000 head a week, without “having a clue” where he was going to sell them. He then learned that the next certification course was not slated for several months down the road. Fortunately, officials were able to facilitate his pressing need to take the training locally as soon as possible.
As part of their initial learning journey, the couple attended a company sponsored workshop which ended up selling them on the hydroponic equipment they decided to use. For their custom greenhouse they chose an Amish company in Lancaster, Pa.
While much less physically messy than working with dirt, they soon discovered that hydroponic cultivation requires a rigorous and ongoing, 365-day, seven-day a week dedication.
There’s steady planting, harvesting, packing, and delivery to tend to. The computerized monitors which check on temperature and Ph levels, along with the network of tiny tubing supplying nutrient water to each plant encapsulated in row after row of long channel containers, all require frequent, vigilant monitoring. Before another crop a fresh crop of seeding pods goes into the channels, they need to be thoroughly cleaned in a sanitizing solution.
Care is also taken to maintain a strict pest and pesticide free environment, making the new structure off limits for the family’s two dogs, who are fixtures in the first greenhouse.
In addition to computerized climate control, the greenhouse is outfitted with a cooling pad, like those used in poultry houses which uses water and air, fans, an automated shade able to sense when to open and close (during winter the closure helps maintain warmth). The striking grow lights, casting a bright pink night-time glow, can be seen from a distance. Viewing the sight initially, neighbors and others teasingly asked what they were growing in there, Trudy recalled with a laugh.
In the beginning the Brambles experimented with growing several types of greens, including bok choy. After learning which were most in demand and which grew most quickly, they settled on current varieties consisting of romaine, bibb (buttercrunch), spring mix (two types including one customized upon request), and arugula (for one customer). The romaine and bibb go from seed to harvest in about two weeks, while spring mix and arugula each take about a week.
The initial seeding process takes place in what the Brambles have dubbed “the nursery” — the cool confines of the office area in front of the greenhouse (lettuce loves and germinates best with cooler temperatures, Bob explained). While he hand-places some of the seeds into small pod modules, a tabletop device helps with others, using a vacuum hose to automatically settle each coated (and color coded) seed into a tiny hole. When the device is turned over the seeds settle into their growing pods.
After about three days, the pods go into the greenhouse growing channels, where they will be watered via a closed system of slender tubing bringing a solution of basic nutrients and special macronutrients from a central ground tank. To ensure that the mixture does not get too low or too high in Ph, and that no tubing has gotten twisted and cut off flow anywhere, continual alertness is required, Bob mentioned.
Harvesting usually takes place Sunday and Monday mornings, and involves lifting the lettuce, roots and all, up out of its channel opening, removing bottom leaves, and packing within protective containers. A cooler then keeps the boxes of prepped lettuce chilled and ready for regular local deliveries via van to the solid dedicated client base of wholesale and restaurant related customers throughout Dorchester, Talbot, and Caroline counties.
Just one of a handful of Shore-based hydroponic farm businesses, the Brambles said they like to help support local enterprises, just as others have supported them. They noted Hurlock farmer Darlene Goehringer of Pop’s Old Place helped spread the word about the Brambles’ lettuce, through her restaurant contacts.
The COVID-19 shutdown of March 2020 threw a curve ball into their burgeoning customer base.
“For a while, we were the Food Bank’s biggest supplier,” Bob said.
Gradually, farmers’ markets, carry out service, outdoor and even limited indoor service brought demand back full strength, to where it is today, supplying nearby E & L Restaurant, the Caroline Culinary Institute’s Shore Gourmet, Simmons Centre Market in Cambridge, and Nice Farms Creamery up the road in Federalsburg, and many others.