Bronaugh appointed to USDA’s No. 2 spot 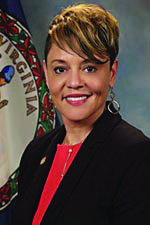 WASHINGTON — Virginia commissioner of agriculture Jewel Bronaugh has been appointed as the incoming deputy secretary at USDA, the number two position at the agency.
President Joe Biden tapped Bronaugh to be the next deputy secretary of agriculture, the second highest position at USDA.
If confirmed, she would be the first woman of color to hold the position.
Bronaugh, who has run the Virginia Department of Agriculture and Consumer Services since 2018, served as Virginia state director for USDA’s Farm Service Agency during the Obama administration, starting in 2015.
She also has a doctorate in career and technical education from Virginia Tech and spent time as the dean of the College of Agriculture for Virginia State University, where she oversaw extension, research, and educational programming.
USDA’s deputy secretary traditionally oversees the department’s day-to-day operations.
Matt Lohr, a Virginia farmer who ran USDA’s Natural Resources Conservation Service under the Trump administration, used a Facebook post to praise Bronaugh’s selection.
“America’s farmers and ranchers can be sure they have a true friend and advocate working for them in D.C.,” he said.
“AFBF congratulates Dr. Jewel Bronaugh on her nomination to serve as USDA Deputy Secretary,” said American Farm Bureau Federation President Zippy Duvall. “Dr. Bronaugh’s work as Virginia’s Agriculture Commissioner and her previous experience as state director of USDA’s Farm Service Agency have established her as someone who understands the needs of America’s farmers and ranchers. We also appreciate the work she has done to address mental health issues in rural communities — a priority we hope she continues to pursue at the federal level.
“Dr. Bronaugh’s nomination, as well as the nomination of Tom Vilsack for Secretary of Agriculture, shows President-elect Biden is carefully considering the challenges facing our nation’s farmers and ranchers. We look forward to working with the new leadership at USDA to ensure American agriculture continues to lead the world in growing safe, affordable food.”
Virginia Farm Bureau President Wayne F. Pryor also commented on Dr. Bronaugh’s nomination:
“Virginia Farm Bureau is proud to see Dr. Bronaugh nominated as USDA Deputy Secretary. The Commonwealth has been fortunate to benefit from Dr. Bronaugh’s leadership as VDACS Commissioner, State FSA Executive Director, and her roles at Virginia State University. She has done much to promote agriculture and address the many issues facing farm families and rural Virginia. Dr. Bronaugh will carry on this work in her new leadership role in Washington, D.C., and we support her swift confirmation.”
The top Democrat on the Senate Agriculture Committee, Debbie Stabenow of Michigan, said Bronaugh has the “background in farm services, research, and extension will bring a breadth of knowledge and experience to the department. As the first woman of color to serve in this position, she will be an important voice as the Biden administration works to address the many challenges facing our farmers, families, and rural communities. I look forward to learning more about her plans and priorities during the confirmation process.”
Virginia Gov. Ralph Northam said “Bronaugh has been a true leader — promoting the agency’s core mission while taking on new challenges, including our COVID-19 pandemic response and farmer mental health, focusing economic development to improve food access in underserved communities, and engaging youth in the field of agriculture. I am proud that she will be representing both the Commonwealth and all Americans in such a critical role at USDA and in this new administration.”
A biography provided by the Biden transition team notes her efforts to start the Virginia Farmer Stress Task Force in 2019.
The task force was “organized in partnership with agricultural and health agencies and organizations, to raise awareness and coordinate resources to address farmer stress and mental health challenges in Virginia.”
Bronaugh has also worked to stand up the Virginia Food Access Investment Fund, a new program to address food access issues within historically marginalized communities.
According to the National Association of State Departments of Agriculture, of which Bronaugh is a member, Bronaugh’s time at Virginia State also included work as associate administrator for Extension programs and a 4-H extension specialist, where she developed and delivered programs that addressed issues of bullying among today’s youth.
Bronaugh was one of a handful of nominees announced recently, including Elizabeth Klein, deputy director of the State Energy and Environmental Impact Center at the NYU School of Law, as deputy interior secretary, New York City Transportation Commissioner Polly Trottenberg as the deputy secretary of transportation, and former Commodity Futures Trading Commission Chairman Gary Gensler as the pick to chair the Securities and Exchange Commission.
“Our administration will hit the ground running to deliver immediate, urgent relief to Americans; confront the overlapping crises of COVID-19, the historic economic downturn, systemic racism and inequality, and the climate crisis; and get this government working for the people it serves,” Biden said.
Former Agriculture Secretary Tom Vilsack was announced in December as Biden’s pick for another term as USDA chief.
No date has been announced for his consideration before the Senate Ag Committee.