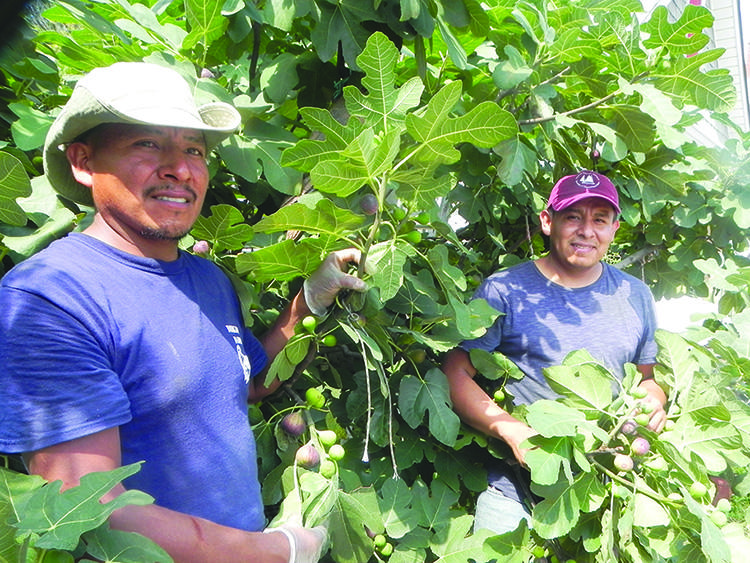 Jacob and Rigo Cruz tend to outdoor fig trees at Dieker’s Farms in South Amboy, an urban farm bordered by the Garden State Parkway and State Routes 9 and 35. (Photo by Richard Skelly)

SOUTH AMBOY — Growing fig trees that produce good, substantial yields is not easy in New Jersey. Many fig growers – like Bill’s Figs of Flemington — keep their fig trees in pots and move them indoors for the winter.
Jacob and Rigo Cruz, foremen at Jim Dieker’s 17-acre farm that straddles South Amboy and Sayreville — have been selling between 60 and 70 quarts of figs at Dieker’s busy farm stand on Bordentown Avenue here for the decade or so. Raised on a coffee bean and corn farm in Oaxaca, Mexico, they said their parents taught them how to grow a bit of everything. The brothers, were also quick to credit Dieker, a skilled welder, carpenter, mechanic and boilerman, for teaching them more about growing small fruits and vegetables here in the Garden State.
“We’ve both learned a lot from Jim working here the last 20 years,” Jacob added, “and we just try to keep the best produce and fruit that can get out of the field, so we’re always keeping our eyes on the fields.”
The Cruz brothers can frequently be found at the farm stand, where they’re growing four fig trees, or out in Dieker’s Kubota, slicing through a suburban neighborhood with houses and stop signs to get to the other tract of land a few blocks away. Most of the neighbors have been there for years and love living so close to a working vegetable farm, they said.
Rigo is in charge of most matters relating to the fig trees, while brother Jacob handles most of the social duties for Dieker’s Farm.
“White figs are sweeter than red figs,” Rigo said. Like so many other delicate small fruits, “you have to pick them at just the right time.”
Rigo started a few trees out in greenhouses, but they got 5 foot trees from an Italian friend in Sayreville who suggested the Cruz brothers move them to Dieker’s Farm. Some of the trees sit beside Dieker’s farm stand, where they have easy access to water and can be monitored closely, while two trees are doing well on the other tract of land a few blocks away. More fig trees may be planted in coming years, the brothers said.
“I planted them outdoors here 12 years ago,” Rigo said. “Every year after they dropped their leaves, I put insulation around the trunks.”
Their four white fig trees and two red fig trees have been producing steady yields for the last 10 years, he added, and regular patrons at Dieker’s farm stand ask for them every year.
Encouraged by their success growing figs outdoors and covering them in plastic for the winter, they decided to plant three more trees.
“If you pick them ripe they taste very good and very sweet, sometimes they have a nice color but they’re not ready, they don’t taste very good,” Rigo said. It’s a combination of visual and tactile senses to know when it’s best to pick figs.
“If you pick them a little green, they’re not as sweet,” Rigo added.
Jacob adds: “It’s like everything else you grow on a farm; some years you get too much rain, some years you get too many hot days, so it’s always a challenge.”
“I would say in 2018 and 2019 we had very good yields, but this year they came about much later, with all the rain we had in the spring,” Rigo said.
The Cruz brothers and their wives have full plates helping out at Dieker’s Farm, and with such a small crew, Dieker grows a staggering variety of vegetables and small fruits. Over time, chunks of Dieker’s land were taken away from his grandparents’ initial farm by the Garden State Parkway and other government entities, so now his farm is down to just 17 acres, but all of it is preserved farmland.
The Cruz brothers put clear plastic over the top of the fig trees for the wintertime while the trunks remain wrapped in insulation.
The key is to prevent freezing water from getting into the trunks of the trees so they can make it through winter unscathed.
“After we wrap it with insulation, we go over it with rope or twine, to make sure it’s sealed. If the insulation gets wet, we have to change it,” Rigo said. Every year for the last decade, the yields have been between 50 and 70 quarts, enough to sell most at the farmstand while retaining a few quarts for themselves and Dieker.
“Some years, customers are asking for figs weeks before they’re ready, so we often put them into pint baskets to at least be able to put some out there,” Jacob added.