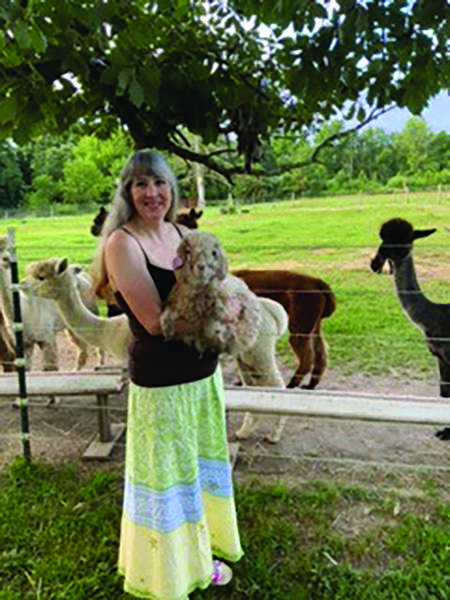 BRANCHVILLE — Natalie Burger sums up her view of life and her career in three words.
“I love farming,” she said, adding, “I love the culture of farming. I love the fact that every day is different. It’s a lot of work, but very enjoyable and rewarding work at the same time.”
She said she grew up in a family steeped in agriculture. “My grandfather on my mother’s side of the family was a poultry farmer,” she said. As a young child, she moved with her family to a 5-acre homestead in rural Illinois. She came back east to go to college, and while she returned to Illinois for a short time after graduation, she decided to make New Jersey her home as an adult. In 2004, she and her husband Mike bought the land that would become Hidden Pastures Luxury Fiber Farm.
“I looked at my skills,” Burger said, and determined that her skills working with fiber to create products would fit nicely with a farm of animals that could produce those fibers.
The family has about 75 animals on 22 acres of land at Hidden Pastures in Branchville, N.J., in Sussex County. They raise Angora goats that produce mohair, Cashmere goats, Angora rabbits, Tibetan yaks, llamas, alpacas and Teeswater sheep.
All of animals graze on pasture land at the farm for about seven months of the year. Depending on the weather they are fed hay generally from October to April timeframe. In addition, the animals get fed supplemental grain year-round for nutrition, Burger added, especially for the mineral content.
She said the farm aims to operate a closed herd system.
“We generally grow our herd from within our existing animals,” she said. “We choose not to add animals to our herd, unless we need new genetic stock to add for diversity within the herd. To have a long-term, productive herd, you need genetic diversity to begin with and then you have to add new genetic stock as needed. In almost all cases, it’s usually a male that we add to our herd for genetic diversity.”
“We have animals that are two weeks old up to animals that are 20 years old,”she added. “We keep all of our animals – none are sold for meat or other uses. If an animal can get up in the morning, eat breakfast, and go out with its herd, it will still be living with us. If the animal reaches the point where it can no longer do so, then we have another conversation with our veterinarian.”
“We wouldn’t be able to be financially stable without the agritourism activities,” Burger said. “While harvesting and selling fiber covers the direct costs of the animals, it doesn’t produce the income to cover all of the other expenses we have in running the farm.”
Among events held at Hidden Pastures are ones where visitors can picnic with the alpacas, hand-feed goats and alpacas, and pick out pumpkins while the animals look on.
During the winter holidays, visitors can even enjoy hot chocolate and cookies while visiting with PacaClaus, an alpaca dressed as Santa Claus.
“Our animals are all well-conditioned to being around human beings,” Burger said. “They are quite accustomed to people watching them, petting them, and just being near them.”
These agritourism efforts also bring in customers who buy finished products at the fiber goods shop at the farm. Like most public-facing farms, social media has been key to promote Hidden Pastures.
“We use Facebook and Instagram to help educate people about our animals,” Burger said. “We find people are quite interested in how the animals produce fiber that can be used for a variety of products.”
Because of their location in Northern New Jersey, animal security is crucial at Hidden Pastures, Burger said.
“We have both black bears and coyotes in our area,” she said. “Black bears can be very destructive at times, but they generally don’t want to tangle with our guard dogs.”
“The coyotes, though, have adapted to our farm and avoid coming at dusk or when it’s dark out,” Burger said. “They are very quick and sneaky. They will wait until they think they can grab one of the smaller animals.”
Hidden Pastures uses guard llamas to protect animals.
“The guard llamas are very protective of the other animals,” Burger said. “If they determine that there is a threat, the guard llamas will let out an alarm call. They will push all of the other animals up against the barn and will keep them there until the danger has passed.”