Buskers, Holtz get accolades from KCFB 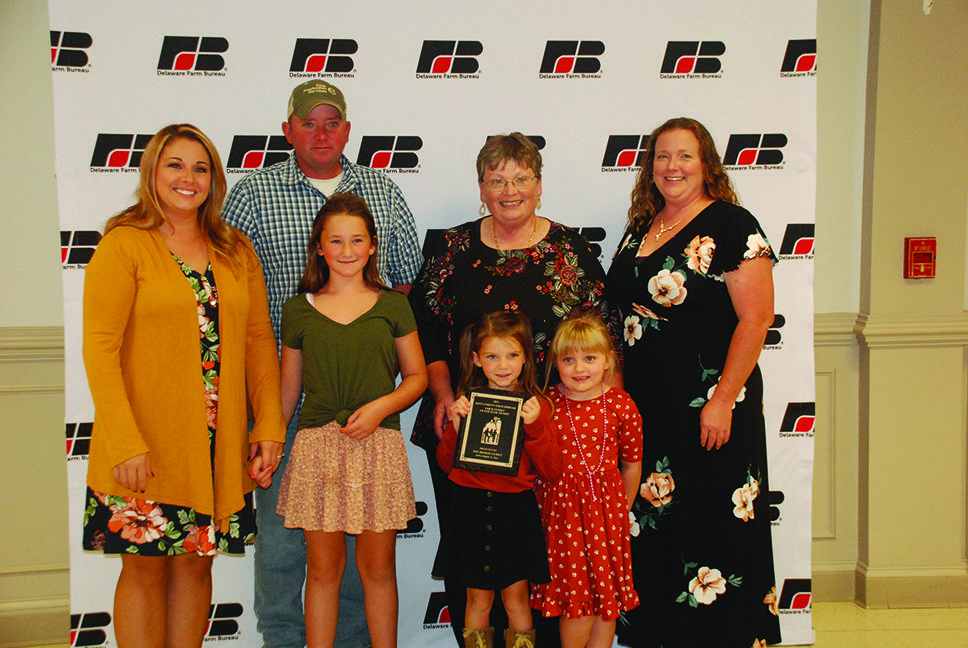 The Busker family of Harrington, posing for photos after being named Kent County Farm Bureau’s Farm Family of the Year, includes, from left, Ann Busker and her husband Philip; their daughters, Karley and Gracie; matriarch Charmayne Busker, Sophie Rager and her mom, Sara Busker. (Photo by Carol Kinsley)

FELTON, Del. — Despite challenges and obstacles, Delaware Farm Bureau was able, via Zoom and hybrid meetings, to carry out its mission during the pandemic, noted Jacob Urian, Kent County Farm Bureau president.
“But it’s great to be able to get together and have this banquet!” he told attendees of the KCFB annual meeting and banquet gathered at Felton Fire Hall on Sept. 27.
After a meal of oysters and chicken salad, Gregg Knutsen presented the Busker family of Jenamy Farm LLC in Harrington with the KCFB Farm Family of the Year Award.
Jenamy Farm began in 1979 by lifelong farmers Chuck and Charmayne Busker. Starting with a dairy herd of 35 and 70 acres of cropland, the operation has grown to a milking herd of 260 with an equal number of young stock and 775 tillable acres.
Charmayne earned a bachelor’s degree in dairy science from Virginia Tech in 1977. In addition to acting as CFO of the farm, she worked with Farm Credit in commercial lending for 30 years.
She volunteered with Delaware 4-H, Delaware Ag Museum, Delaware Holstein Association and the State Fair and holds an honorary state FFA degree. She was inducted into Delaware 4-H Hall of Fame in 2018 and was awarded the Joy G. Sparks Award in 2013 and Delaware Holstein Association’s Distinguished Service Award in 2006.
In 1981 Chuck and Charmayne hosted the first version of Delaware Cow Camp at their farm and facilitated it for a number of years after that. In 2001, it was reinvented as an overnight event at the fairgrounds where as many as 60 youngsters and their calves “camp out” and participate in a variety of educational workshops. The entire family is involved in this event, which is annually funded by an endowment in the Delaware 4-H Foundation created by family and friends in Chuck Busker’s memory. Chuck died in 2007.
The Buskers’ son, Philip, attended the University of Delaware and is now the COO of the family farm.
He served on the Green Branch Tax Ditch Committee. He and his sister, Sara, were both recipients of the American FFA Degree.
Sara earned a degree in agriculture from the University of Delaware in 2010. She is currently the operations assistant at the Delaware Ag Museum, a 4-H volunteer and a member of the Delaware Dairy Princess Committee. She served on the Kent County 4-H Livestock Advisory Committee and was its treasurer.
The family has grown to include Philip’s wife, Ann, and their children Karley and Gracie, and Sara’s daughter Sophie Rager.
Delaware Ag Secretary Michael Scuse introduced the KCFB Distinguished Service to Agriculture Award recipient, Katherine (Kitty) Holtz of Clayton.
She and her husband, David, have operated a grain farming business in Delaware since 1969.
Active in Farm Bureau since 2003, Holtz has served 11 years as a director on the KCFB board and the state Farm Bureau board.
She led the KCFB Women’s Committee for eight years, led the State Farm Bureau Women’s Committee for one year, served as Kent County Farm Bureau president for two years and was state Farm Bureau president for four years.
Holtz volunteered for 10 years as assistant organizational leader for 4-H. She has continuously impacted the ag industry in a positive way by promoting the need for agriculture to have a seat at the table of discussion on any issue that can have a negative impact on agriculture.
Scuse interjected, “Trust me, she makes sure her voice is heard!”
Sometimes it is a matter of a lack of education for members of various committees who are not aware of how a law or regulation can impact agriculture. Holtz believes, “If we are not at the table, agriculture is left out.” She has served on a host of committees — a list so impressive that the entire list was repeated by State Representative Lyndon Yearick in presenting a resolutions from the Delaware House, which was signed by all House members.
The list includes:
• Governors Native Species Commission;
• Ecological Extinction Task Force;
• Farm and Food Advisory Committee;
• Delaware Produce Safety Advisory Council;
• USDA Specialty Crop Review Committee;
• USDA-NRCS State Technical Committee;
• Central Delaware Advisory Committee on Agrability;
• Department of Agriculture Deer Management Committee;
• Council of Farm Organizations;
• Farm and Food Council; and
• Kent County Emergency Fund Committee (tax on farm buildings issue).
Holtz participated for three years as a panel member for the Central Delaware Chamber of Commerce Leadership Conference for Agriculture and Agri-Tourism.
She also attended meetings regularly sitting in for committee members or just attending in a watchdog effort and to offer public comments.
Holtz said she joined Farm Bureau in 1976 and in later years became active. She said she appreciated that she had been “encouraged and supported” in her endeavors, and that the award was very much an honor.
After a brief business meeting, scholarship winners were announced: Olivia Gaines, Timothy Gardner and Savannah Holtz. Bethany Knutsen was introduced as the 2021-22 KCFB Youth Ambassador.