Campbell driven by her loyalty to animals 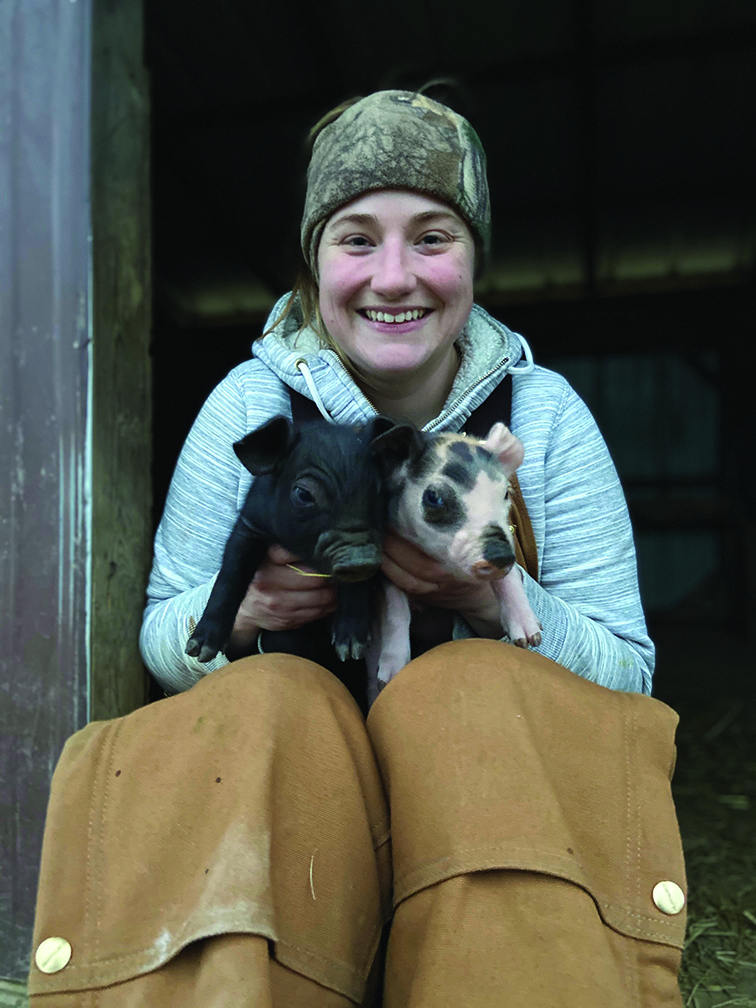 Just before Valentine’s Day of this year, Sarah Campbell hangs out with a couple of the piglets from the litter of her sow Gertie. (Photo courtesy Sarah Campbell)

WEST RIVER, Md. — “I think of my experience as being more of a beginning farmer than anything else,” said Sarah Campbell, owner of New Roots Farm. Yet, the comprehensive amount of information Campbell presented in a recent webinar sponsored by Future Harvest about raising pigs on pasture belies that nominal assessment.
“She always has good ideas,” said Lee Langstaff, owner of Shepherd’s Hey Farm in Comus, Md., and past president of the Maryland Sheep and Breeders Association. “And she respects her animals.”
Langstaff said she has known Campbell for about five years, beginning when Campbell contacted her about adding sheep to her livestock mix of pigs, cattle and, for the moment, pasture poultry.
“She’s in her element with the animals,” Langstaff said, “and she soaks up information like a sponge.”
It’s just a few of the many reasons that Langstaff encouraged Campbell to join the MSBA board last fall.
“Our emphasis also has been to get some of the younger members onto the board,” she said, “To find those young folks who are trying to make it work in farming.”
Yet, Campbell said she originally did not envision herself as a farmer, even though her parents were farmers and she grew up in a farming community.
It was through her graduate school studies at the University of California Davis that she became interested in sustainable agriculture and decided to return to Maryland and take a position with “an ag organization” – the USDA.
Selected this past March as the national coordinator to lead “a new team that will coordinate USDA’s beginning farmers and ranchers efforts,” Campbell helps this increasing portion of the farming population — 27 percent according to the 2017 Census of Agriculture, a rebound from the 2012 Census of Agriculture — find “the village of support” they need to become and stay successful in farming.
In her own instance, that village is comprised not only of the farming community she grew up in, but also other women farmers she was able to connect with early on in her farming career.
“I’ve been really lucky that I’m farming in the community that I grew up in,” said Campbell, who leases the land for her farm from her mother. “The community has been very supportive and generous, and my mother, a veterinarian, has been a great sounding board.”
Campbell also appreciates that there’s “a great community of female shepherds in Maryland” to help her grow her flock, the latest addition to her farm. She “finds sheep to be a manageable enterprise” for female farmers “because, compared to cattle as a grazing animal, you don’t need as much specialized equipment.”
Campbell also has been looking at other ways beyond her meat CSA to expand her farm’s capacity. “I’m currently farming about 70 acres, and the farm has about 200 production acres; so, there’s room to grow,” explained Campbell.
Yet, financing that growth, even in this year’s pandemic environment, which has emphasized the increased need for locally-grown food, can be tricky.
So, Campbell has begun looking towards agritourism, particularly farm stays, as a means “to generate additional revenue and balance the production aspect, especially, for me, during the summer.”
That she has come to this conclusion is not surprising. “A lot of female farmers are involved in value added agriculture and agritourism,” Campbell said.
That includes Campbell herself, who currently sit on the county agritourism commission for Anne Arundel County and has encouraged the passage of county legislation to allow county farms additional agritourism opportunities.
“Sarah’s always willing to work with other farmers to help them make a few extra bucks on their farm,” Langstaff said, “and people do want to come out and spend time on the farms.”
Langstaff is also confident that despite the beginning farmer moniker, given to anyone who like Campbell has been farming for less than 10 years, Campbell will continue to be successful in her endeavors. “She’s creative, smart, energetic, cares about her animals and is willing to share what she learns with others,” Langstaff said. “And I really love that she’s already gone further than I have.”