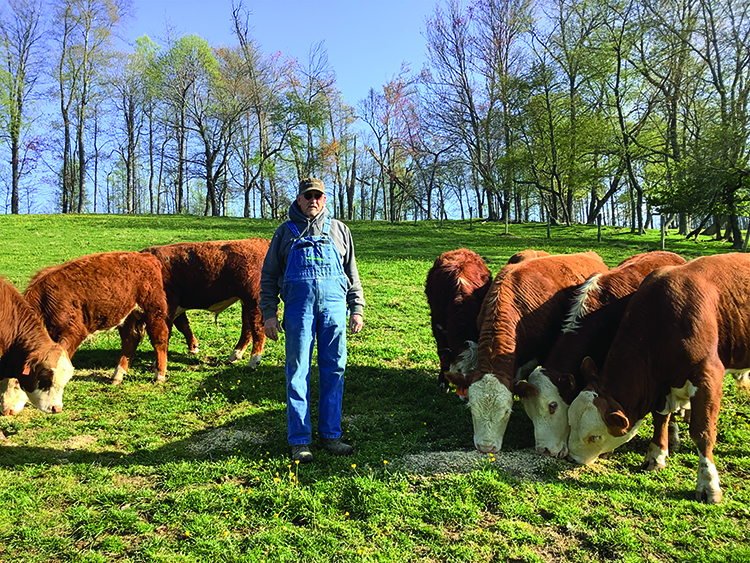 David Wayne Campbell, the new president of the Virginia Cattlemen’s Association, communes with some of his favorite Hereford cows while attending to morning chores on his Russell County, Va., farm. (Photo courtesy Betsy Campbell)

The new president of the Virginia Cattlemen’s Association has high hopes for the organization as he leads it into a new year and expanding programs.
David Wayne Campbell moved from the office of president-elect to president of the state-wide group during Beef Expo April 11-16.
Campbell has long been active in VCA and served in numerous positions over the years. He succeeds Jason Pratt and has been part of the innovations Pratt worked toward.
The organization was created as a marketing tool for Virginia beef and in recent years has developed to become a policy making voice for the industry.
Campbell pointed out in a telephone interview that the new by-laws are complete and new committees are in place. He wants to concentrate on getting the state’s cattle producers on the same page, emphasizing the importance of unity. He is looking forward to VCA’s developing a market for its branded beef, noting staff is in place to work on this new endeavor.
“I’d like to see more youth programs,” he said. “I want to try to grow the numbers.”
The 69-year-old beef producer can claim being in the beef business most of his life. He said he has owned at least one Hereford cow since he was a 6 years old.
Campbell operates the David W. Campbell Farms in Washington County, Va., where he grew up on the family farm. He left after finishing at Abingdon High School where he was president of the FFA Chapter his senior year. He benefited from the managerial training program offered by Southern States Cooperative and had a 36-year career with it. He managed SS stores in Russell and Wythe counties in Southwest Virginia.
Upon his retirement, he and his wife Becky built a house on the home farm and returned to his roots. He now has a diversified beef cattle farm running cattle on 450 owned and leased acres in Russell County. He had kept stockers while working off the farm.
Campbell now has a 125 head cow/calf herd operation that includes 25 registered Hereford cows. He uses articicial insemination on all his heifers and then uses clean-up Hereford bulls.
His commercial herd of Herefords is bred to various other black breeds to get hybrid vigor in his beef. Stockers remain a part of his farming operation with 180 head currently on the farm.
Throughout his off-farm career, Campbell stayed involved in the beef cattle industry. He was on the board of the Abingdon Feeder Cattle Association in the late 1990s and is now a member of the Smythe-Washington Cattlemen’s Association.
Campbell has been on the board of the VCA’s Policy committee. Four years ago he was elected to the VCA Executive Board of Directors.
The new VCA president is an elected board member of Farm Credit of the Virginias’ board. On local level, he serves as chairman of the Washington County Public Service Authority.