Carrier: ‘We do things a little differently’ 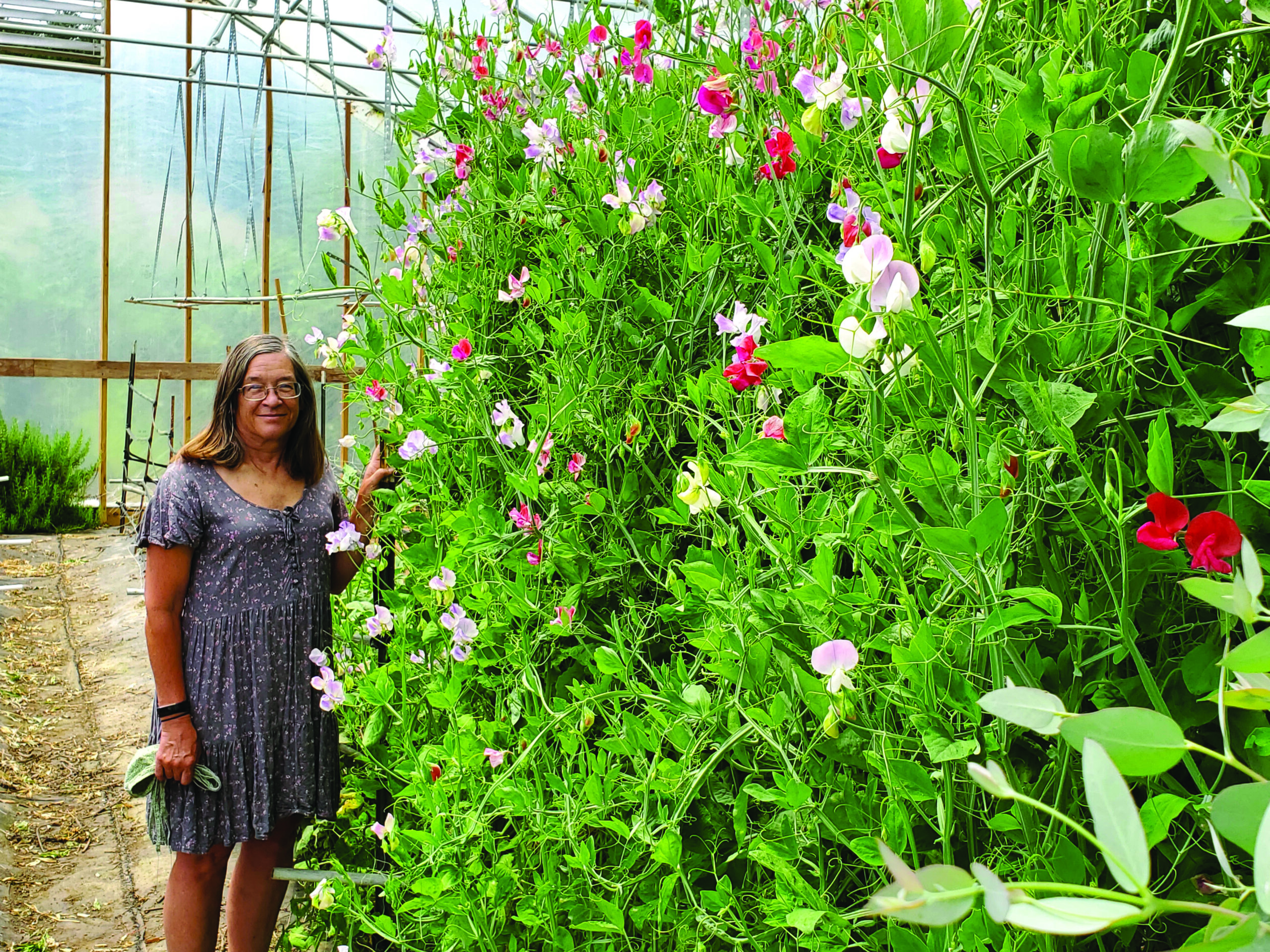 Carol Carrier stands next to a patch of sweet peas growing in the one hoop house left at their original farm. “They’ve gotten so tall, I almost need a stool to cut them,” she said. (Photo by Joan M. Kasura)

LAYTONSVILLE, Md. — “We do things a little differently,” said Carol Carrier, who along with her husband, Leon Carrier Jr., owns Plantmasters. “We do flowers and plants.”
The latter are an outgrowth of Leon’s original nursery and bedding plants business begun more than 40 years ago.
Although they’ve moved away from growing as many perennials as in the initial years, they do continue to grow plenty of annuals and succulents for both retail and wholesale markets.
They also “sell an incredible amount of flowers out of this small bit of land,” Carol said.
That “small bit” includes 2 acres at their Laytonsville home alone with “about five neighbors who let us plant in their yards.”
As an example, Carol pointed to a line of hydrangeas across the street where the extended shade of mature trees protects them and their purplish-blue fluff balls of blooms from the heat of the afternoon sun. “As you can see,” she continued, gesturing back towards the sunny fields behind their house, “we don’t have a lot of shade.”
That, circumstance, however is changing as of three years ago when their son, Leon Carrier, III, and his family, made the decision to return to the family business he grew up in and purchased a 5-acre farm, now known as Endless Rows.
Located 10 minutes away in Woodbine, his decision has not only extended the Carriers’ business to a second generation.
However, thanks to mature trees which dot the front part of the property, has also introduced the possibility of shaded areas for cut flower crops that thrive in those conditions.
The new farm has also allowed them to build outbuildings to accommodate their expanding cut flower business and to begin planning for retirement.
Originally, it was a horse farm with just a house and stable, the Carriers have built a barn, moved two of their three hoop houses from their farm to their son’s farm, and erected a fourth hoop house under a grant from the USDA’s Natural Resource Conservation Service.
This summer’s addition, will be an enormous cold box space to partially replace the small basic cold box at the Carriers’ original farm.
Measuring 30 feet by 15 feet and totaling a generous 450 square feet, the much larger space will give them the opportunity to pre-cool bulbs for holiday and winter planting in both retail containers and their hoop houses as well as “let floral designers the opportunity to ‘shop the cooler.’”
Carol pronounced the cold box, “A dream come true!” and especially looks forward to its most important function: the ability to sort and separate cut flowers for the 8 farmers markets they currently attend each week.
At one of those markets, Madgie McGaughan, who along with her husband Mark, owns M and M Plants, another flower farm in Dickinson collaborates with the Carriers in selling their cut flowers at the Olney Farmers Market.
“I learned the model from them,” said McGaughan, explaining how she came to be selling both annual plants and cut flowers.
McGaughan first encountered the Carriers over a dozen years ago while working at Johnson’s Floral Center and pursuing a Master Gardener certification, when they gave a presentation for one of the course’s classes.
“I was smitten immediately by the notion of making a living growing flowers,” said McGaughan.
The very next weekend, she went to one of the Carriers’ farmers market, introduced herself, and, shortly thereafter, in March 2008, began working for them.
She continued with them until late 2010 when she and Mark bought their farm in Dickerson.
“I thought what better way to do it than to learn it from someone who’s successful,” McGaughan explained. “Yes, you can learn from books, conferences and webinars,” she continued, “but I feel hands-on is the best way.”
McGaughan also appreciates that even though the Carriers “don’t sugarcoat” what’s involved in cut flower farming — “you need to be able to hustle in all kinds of weather with bugs and weeds” — they’re still “very upbeat people.”
Recently, that positive attitude shone through as Carol looked ahead to the remainder of this season. Noting that though they’ve “had to make a lot of changes” and, “even harder,” furlough some of their staff, she credits “a pretty good network that comes up with the ideas” and a willingness “to fine tune as we go” to their continued success in a year of pivots.
“Even though people are doing more entertaining at home,” she said, “flowers will still have a part in those regular every day celebrations.”