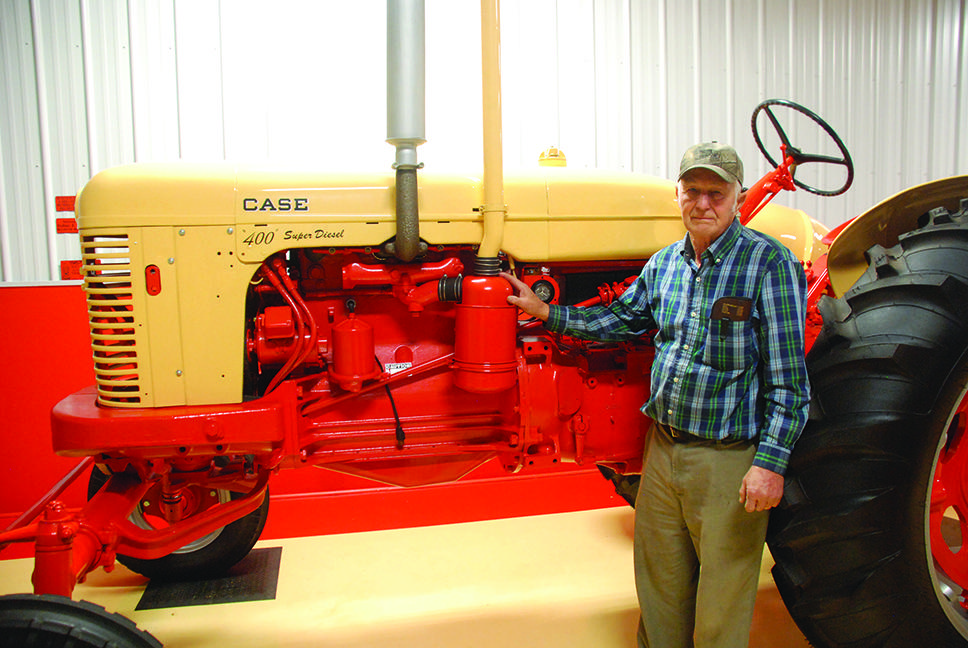 James D. “Dink” Scott, who takes care of Allen Chorman’s tractor collection, said there were only 645 of the Case 400 Super Diesel made. This was the first tractor Chorman drove. (Photo by Carol Kinsley)

MILTON, Del. — Allen Chorman has been around tractors and airplanes all his life.
In addition to some two dozen airplanes used in his aerial application business, Allen Chorman & Son Inc., he also has an “immaculate” collection of 10 restored tractors.
“I was driving a tractor before I went to school. I almost grew up on a tractor,” Chorman said.
By age 10 he was working for crop duster Joe Hudson of Lewes, Del., 18 to 20 hours a day, washing planes at the airport where his father helped with airplanes at night and helping till 5,200 acres at Hudson’s farm.
“I grew up on my uncle’s farm, and I was good at driving. I love driving tractors. I started out driving a Case 400 Super Diesel.”
By 1963, Chorman had graduated to airplanes, starting flight instruction at age 16.
By the next year he had a private pilot certificate and at age 18 he began flying for Hudson.
“I missed working in the fields, but I was too busy flying,” Hudson said. He figures he’s had 30,000 hours in the air, spraying, “and every bit of that on a tractor.”
It took him nearly 25 years, but Chorman finally located that very tractor he had first driven, the Case 400, which Hudson had purchased new in 1957, then sold to Drapers’ King Cole farm in Milton.
It was later sold to a third owner, and from there was lost. It was only by coincidence that Chorman finally found someone who knew where the tractor was.
“There were only 645 of them made,” said James D. “Dink” Scott, who takes care of Chorman’s tractor collection. “There were a lot of Case 400s, but this is a Super Diesel.”
Chorman has worked on airplanes himself, but when it came to restoring tractors, he had someone else do them. John J. Hill of Millington, Md., restored the Case 400.
“Jonathan Thompson (in Kent County, Del.) did most of them,” Chorman said. “Both of them did a good job. They are all completely redone, taken apart, engine rebuilt, whatever they needed. They are all perfect.”
Perfection came at a price. “I wrote a mess of checks for $35,000,” Chorman said.
Scott said many of the parts needed were found at Don Livingston’s Rusty Acres in Austin, Minn.
“This man knows the history of tractors,” he said of Livingston. “He’s the main one for hard-to-get stuff, mostly used, some new, but after-market parts.”
Taking care of the tractors has become almost a full-time job for Scott, who also does farming on a share-crop basis.
Chorman has had health problems in recent years with his heart, hip and knees.
“If it weren’t for Dink, I wouldn’t have these tractors,” he said. “I couldn’t, wouldn’t, without him.”
In Chorman’s absence, Scott showed off the tractors with as much pride as if they were his own. There are nine restored Case tractors and one John Deere model LA. Three others await restoration.
One of the old ones “looks awful, but it runs,” Scott said, launching into the rest of the story. A neighbor lent it to a relative, who told him — after a disagreement — that he had sold it. Years later the new owner of the relative’s farm found the tractor in the woods.
“Her sheet metal is so bad, it would be quite a job to restore,” Scott lamented.
One of the tractors, a Case 830, belonged to lima bean farmers for whom Scott worked for 15 years. “It took four years to restore,” Scott said. “Allen told Jonathan to take his time. It’s the closest to perfect I’ve ever seen. It’s the last one Allen had redone.”
Chorman has not taken them to antique tractor shows. “I wanted them for my own satisfaction,” he said. “I’ve taken one to the Agricultural Museum in Dover. Had one there for a long time. They take turns (displaying different tractors),” he continued.
Chorman has a Case 430, 530, 630… all the way up to a 930. Chorman’s son Jeff “wanted me to have the 1030, the biggest they made,” Chorman added, and he does have one — or did.
The 1030 Diesel is called a “Comfort King,” and Jeff has claimed it as his own, Scott explained. Jeff also has a few other tractors of his own.
“In her day, that was the big tractor; now it’s a toy,” Scott said.
Scott has the first one he ever drove, an Allis Chalmers — not restored — but he traded off one of his father’s, he admitted, wistfully.
Allen said he has no plans to sell any of his tractors.
“It will be up to Jeff in his day what he does with them.”
“He’s done a good job,” Allen added with pride. “I give him all the credit for building our business.”