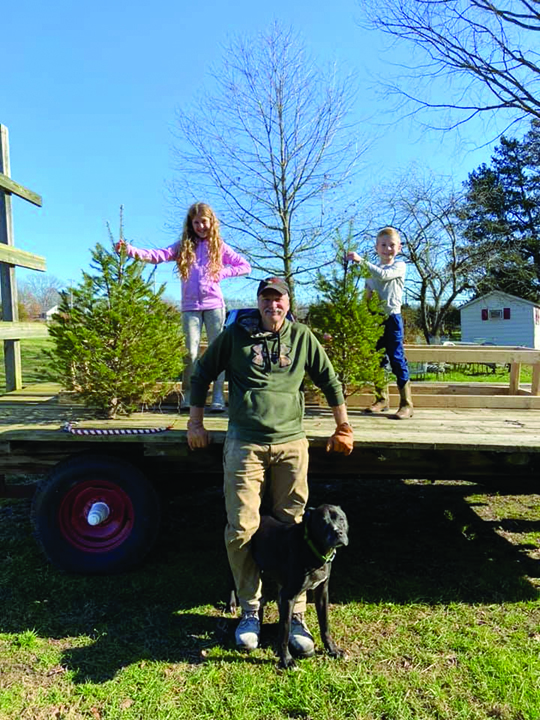 After considering state and Anne Arundel County safety guidelines and laws put in place to minimize the virus’s spread, Palmer made the somber decision to delay the opening by a year.

“We felt that because it would have been our first year, it would basically change what our vision was,” he said. “It’s (disappointing), but with the current times, everybody’s going through a lot of disappointments.”

Even so, he said his farm has gotten between 40 and 50 calls a day since Thanksgiving from people inquiring about trees. It’s part of a larger trend that Christmas tree farmers said they’re experiencing in the year of the pandemic — rabid demand from housebound consumers despite a nationwide supply shortage due to various issues, including disease pressure from heavy rains.

No matter what, business is up, said Joncie Underwood, treasurer of the Maryland Christmas Tree Association. She said she expects sales to increase 10-15 percent. Her farm in Elkton, Md., sold more than 1,000 trees on the first day of the season. In a tough year, consumers want nostalgia and a return to normalcy.

“A real tree does that for them,” she said. “I’ve had some customers tell me they haven’t had a real tree in 10 years.”

A recent study by TRUE Global Intelligence, a data analysis company, found that 21 percent of people who put up an artificial tree last year (or none at all) expected to buy a real tree this year — mostly in response to the pandemic and a desire to brighten the holiday season. Consumers are looking to buy experiences this year, and the vast majority of those surveyed saw Christmas trees as an “experience” rather than a product.

“I think everybody wants a real tree,” said Don Hallowell, owner of Don’s Tree Farm in Greenwood, Del. “The demand is way higher than what the supply can contribute to.”

Hallowell raises about 5 acres of trees on his 40-acre farm, and most of what he sells are pre-cut stock he buys from growers in the Allegheny Mountains. Fraser firs, the Cadillac of Christmas trees, simply don’t grow well on Delmarva or Delaware soil. Over the last five years, wholesale prices have tripled or quadrupled, he said. A 12-foot Fraser can cost $250 or more — or as much as $750 closer to Washington, D.C. It’s higher the closer one gets to New York City. Prices can stun consumers.

Abnormally rainy weather over the last several years reduced inventory and stunted growth, Palmer said. Swiss needle cast, a disease unique to the Douglas fir, is a bigger problem. Within the last two years, he said he found it difficult to buy Douglas fir seedlings after disease wiped out a significant chunk of the regional nursery stock. The effect can be seen not just on Christmas tree farms but on evergreens across the region, he said.

The demand has been so great that several farmers said they’ve shut down their farms early — some had already closed by the second week of December — so they don’t cut down trees on track to be next year’s stock.

“We’ve cut so many trees out of our field we have to start pulling the reins,” Hallowell said.

While a handful of regional Christmas tree farms decided not to open this year due to pandemic-related concerns, those who did said business, for the most part, has proceeded as usual. Jack Coleman, owner of a tree farm in Middletown, Del., said he makes sure everyone on the farm wears masks, and the farm’s hayrides carry between 10 to 15 people, less than the usual 35. Business, regardless, is booming.

“What we’re doing seems to be working pretty good,” he said. “It’s chaos on the weekends.”

Meanwhile, in the background, lurks an ongoing problem in the tree industry — the reluctance among younger people to join it, Hallowell said. At 65 years old, he said he’s the second-youngest grower in Delaware, a state of just 11 tree farms. He remembers when there were at least 30.

He doubts the industry’s ability to rebound from the last several years.

But Palmer, who retired from firefighting in 2009, is just getting started.

“I always wanted a Christmas tree farm. It’s something I’ve had a passion for for years and years, and I finally said, ‘If I don’t do it now, I’m never going to do it,’” he said.