Cicadas’ bark seem to be much worse than their bite 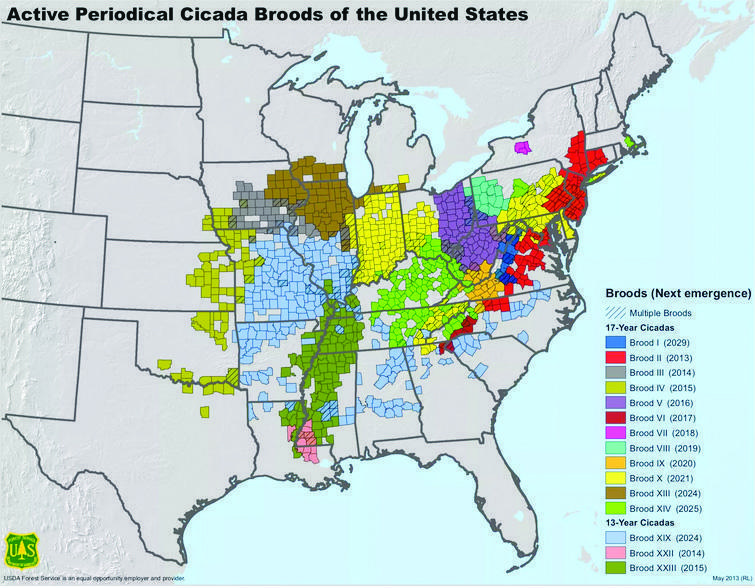 This year’s cicadas, known as Brood X, are one of a series of active broods stretching from the East Coast to the Midwest, all with different years of emergence. (Image courtesy United States Forest Service)

The country’s largest brood of cicadas emerged from the ground across Maryland and Delaware over the last several weeks, and despite the spectacle, it’s been relatively harmless to a sample of regional agricultural operations.

The Eastern Shore has been largely spared due to its inhospitable sandy soils, but the rest of the state — excluding Southern Maryland — and Delaware have been witnessing the mass arrival of the winged insects for several weeks. The insects leave the ground once soil temperatures have reached 64 degrees.

“It’s spectacular to see something come up in such large numbers,” said Stanton Gill, a horticulture expert with the University of Maryland Extension who has taken several calls about cicadas from concerned growers. “It’s just a noisy creature that’s very cool when it comes out in large numbers like that.”

The periodical bugs, which leave the ground every 17 years, are relatively harmless, though females can burrow into the branches of young trees and shrubs to deposit eggs, damaging and even killing them.

This year’s cicadas, known as Brood X, are one of a series of active broods stretching from the East Coast to the Midwest, all with different years of emergence. A different brood, which emerged in 2013, rests in Southern Maryland, including Calvert, St. Mary’s and Charles counties.

Horticulturists across the region advised growers and nurseries to consider precautions such as insect netting for vulnerable, valuable trees and delaying planting of smaller trees until the fall. So far, producers and nurseries are mostly witnessing damage — if they see any at all — to the tips of tree branches after cicadas lay their eggs, Gill said.

“Just wait until the fall,” he said. “It’ll look bad, but it’s not going to really effect anything in a big way.”

“They’re everywhere, but they don’t bother the trees that much,” she said. “They just trim up the older trees. They don’t really bother the new trees that we’ve seen.”

Dick’s didn’t take precautions for the bugs because the owner couldn’t recall needing them the last time they emerged, she said.

Operations close to wooded areas are most susceptible to the insects. Cicadas, due to their weight and other factors, struggle to fly long distances and mostly remain in the area where they emerged while they mate. Most of the insects invading Dick’s came from residential areas around the nursery, Shearer said. The operation’s evergreen acreage remains undisturbed, she said.

After cicada-nymph eggs hatch, the nymphs crawl or fall to the ground and begin digging. The cicadas burrow several feet below the surface where they feed on the sap of tree roots and remain there for nearly 17 years (or 13, depending on the brood). They emerge at the same time, it is assumed, to overwhelm potential predators, and the timing of their emergence may be set to avoid predators’ population booms as well.

The cicadas should be gone about six weeks after they emerged, Gill said, leaving little evidence beyond their decaying exoskeletons.

“As far as damage… there are so many other bugs that I’m worried about,” he said. “A cicada? No, not really.”