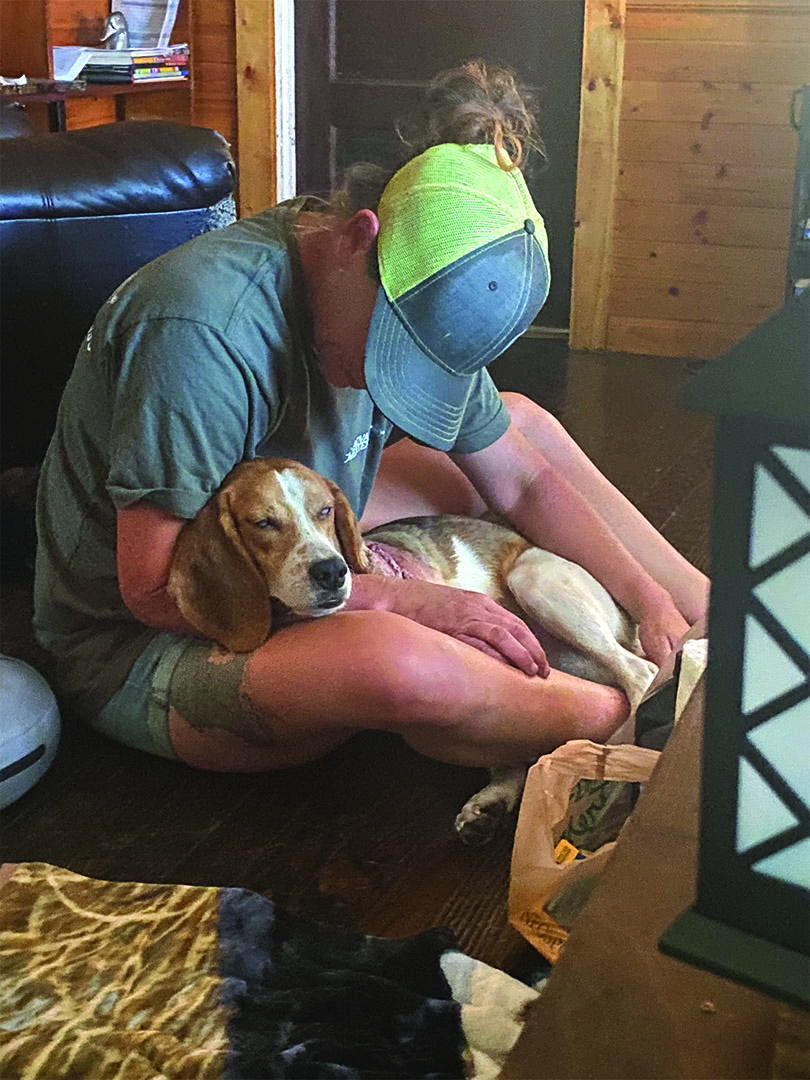 Rachel Clark, one of Shorty’s owners, cradles him as he recuperates from a gunshot wound that required the amputation of his front left leg. The incident is still under investigation. (Photo courtesy Amber Lindsey)

PUNGO, Va. — It’s within the city limits of Virginia Beach, but there’s still plenty of farmland in Pungo, a small, rural community just a few miles south of the coastal city’s core. Much of the land surrounding those farms is wooded, providing a convenient haven for hundreds if not thousands of voracious, crop-hungry deer.

Dogs for this reason are useful. The animals are frequent partners to hunters welcomed to area farms to thin the deer herds, which — no surprise to farmers anywhere — can wreak thousands of dollars in crop damage in a single season.

Shorty, a brown and white, floppy-eared, short-legged beagle from Pungo, was one of these dogs on the morning of Oct. 23. A club of local hunters, including Amber Lindsey, a 39-year-old nurse, were using 4-year-old Shorty and several other hunting dogs to stir up deer hiding in the woods on a farm in the nearby community of Blackwater. Shorty and his four-legged compatriots, tracked by electronic collars, were meant to startle the deer, which would hopefully make their way into the gun sights of waiting hunters.

“A lot of farmers reach out to us for this,” Lindsey said. “We shoot these deer not just for us, but for the farmers and the rest of the country, which needs corn, soybeans, wheat and soy.”

What happened around 10 a.m. remains under investigation, Lindsey said. Shorty was shot, not by a fellow hunter, she said, but by an angry, nearby landowner who was there specifically to harm one of the club’s dogs. Two of the club’s hunters, just 20 feet away, witnessed the incident and say they know the shooter. Evidence was collected from the scene.

Shorty’s injuries were serious, and a veterinarian quickly responded. Shorty had been hit by No. 4 buckshot, likely fired from a shotgun. He had to complete a day of antibiotics before the vet could safely perform surgery, Lindsey said, so Shorty’s wound was cleaned and bandaged and he was given pain killers. Shorty’s owner, Charlie Grimstead, decided that the dog would need space away from Grimstead’s other dogs and should recuperate with Lindsey. That night he was given his own room.

“He was scared,” Lindsey said. “If you even closed the door too hard, he would yelp and try to run.”

The following morning, Shorty had his front left leg amputated, and Lindsey assisted the vet.

“To see this dog laying on the table… it was emotional,” she said. “It really hurt my feelings that such a loving animal could be shot because of a disgruntled man.”

Fortunately, Shorty’s recovery has been swift. Lindsey and her family have treated his wounds twice a day. His owner has visited every day, and Shorty was walking within days of surgery. Walking without assistance took about four days, and within a week he was able to move up and down the stairs.

The recovery hasn’t been without setbacks. He developed an infection and had to change his antibiotic and pain medication. Still, he’s nearly recovered, Lindsey said.

Unfortunately, she said, the shooting is just one of several in the area recently. She believes some of the shooters have killed dogs because they’ve roamed onto their property while hunting. She also believes several dogs have been killed by people who disagree with the notion of hunting dogs. But the animals are well-cared for, she said.

“Everybody does think hunters are mean and mean to their dogs, and these dogs aren’t like that,” she said. “These dogs are like family.”

Shorty’s treatment, however, has been costly. Nearly $2,000 have already been spent, and Shorty will need additional help in the future, including a dog wheelchair that will help him move more easily. More than $2,500 has already been raised on GoFundMe. They’re also offering a $2,500 reward to anyone who can provide investigators information leading to the shooter’s arrest.

“It’s a small town, people talk, and we think if the money gets big enough, people will sell (the shooter) out,” Lindsey said.

Shorty was finally well enough last week to rejoin his pack — albeit on three legs.

“He was happy to be running with his pack. He was so excited,” she said. “He was, like, peeing everywhere. Such a fighter. Such a strong, little pup.”

Anyone who wishes to contribute to Shorty’s recovery — and the reward — can visit the GoFundMe page at https://www.gofundme.com/f/x8n364-help-shorty.