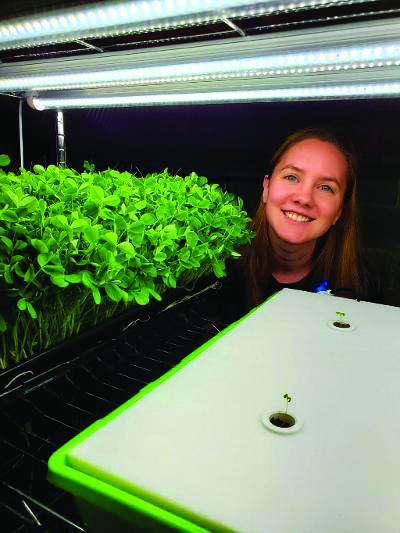 Hillsborough — Krista Coleman grew up in Hillsborough and was a Girl Scout. “My mother was the leader of the Girl Scout troop,” she recalls, “and I went to camp every summer as a kid — the camp was in Hillsborough as well. Just walking in the woods and looking at the ecosystem, and I remember there were some wild blackberries there.”
That experience, and others like it, established in her a love for trees, plants, fruits and vegetables, and sustainability.
Coleman, 32, said she first considered starting a chestnut farm because she likes trees, and the American Chestnut is endangered. “But I figured that’s going to take a really long time,” she says.
Coleman instead is the founder, CEO, and owner of Farmer Over Yonder, which she founded late in 2019 and officially opened in spring 2020.
Her mom is her lone and loving farmhand.
Farmer Over Yonder is a garnish farm for the local community, especially the restaurant industry.
However, Coleman’s biggest challenge has been securing them, but therein she has found a true niche.
“They either don’t have the customers, or they have a supplier of microgreens and they don’t want to switch to somebody else,” Coleman said of high-end eateries. “I go after the ones they don’t think about like pizza restaurants. We’ve got basil, so they could put the basil on top with broccoli, and it is a little nice addition to specialty pizzas.
“All the micro greens and micro herbs are hydroponic,” she said, those micros being basil, cilantro, parsley, and more.
“It’s inside of a barn and it’s vertical farming, so you don’t need any outdoor lighting, it’s all supplemental lighting. After being outside, I tried a whole bunch of different forms. And I said, ‘You can’t control the weather outside; you can’t control the soil conditions to certain extent.’
“So, I asked myself, ‘With what type of farming can you control all the conditions?’ And that’s hydroponics.”
Coleman does soil planting of flowers (she has also tried some hydroponic flowers) and grows a lot of her edible flowers outdoors.
Coleman received her bachelor’s degree in plant science from Rutgers University and her master’s degree from Rutgers’ Graduate School of Education.
She has worked in plant science research for the New Jersey Agricultural Experiment Station Cooperative Extension in Bridgeton and Rutgers University’s IR-4 Project in Princeton.
“I worked on a tomato farm in Bridgeton; I worked with one of the professors on breeding the Rutgers tomatoes” Coleman saidd “’m still growing Sam Marzano tomatoes.”
Coleman constantly analyzes input and output at Farmer Over Yonder.
“Each time that we plant,” she said, “we measure the seeds, we measure the temperature, the humidity, the amount of nutrients, the pH, and put that into a spreadsheet, and then we get the amount of days it takes for them to reach harvest, and the amount at harvest.
“So, we get an average yield, and we get an average amount of seed required for that yield. It’s just a constant analysis of what’s the best input for the best output.”
Farmer Over Yonder also grows specialty crops.
“We’ve got an ice cream banana – that’s indoors as well — and we’ve got some Arabica coffee — indoors. We have some interesting crops: honey kiwi, concord grapes, hazelnuts, peaches, apples.”
For the future, Coleman has her eyes on a large, mixed salad green component, and has just started growing hydroponic lettuce. “We’re going to see how that goes,” she says. “And we might do an actual salad mix later down the line. We really want to be specialty, so I would love to grow some Indian herbs, or some Chinese, Korean, and Japanese herbs. We just started the bok choy and tatsoi, but I’d like to get somebody saying, ‘Wow, I used to have this at home. And now I can have it here.”
Farmer Over Yonder is not yet at the point of expansion yet, but a farm stand may be in the future.
For now, Coleman does online sales, but she said she will take part in the Hillsborough Country Farm Market in April and the Hopewell Farmers’ Market in May.
For more information, visit farmeroveryonder.com.