Collins helps to usher in pollinators 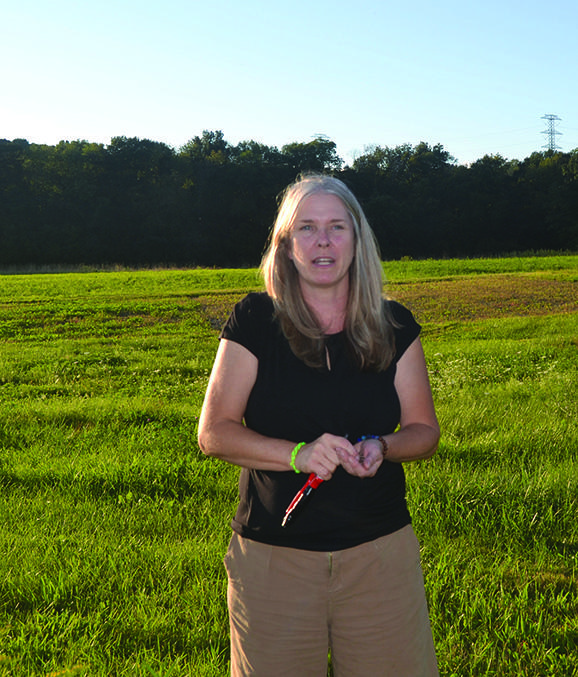 ANDOVER TOWNSHIP — Bright pollinators line the edge of Route 206 marking the entrance to the Sussex County Community College student farm.
Plenty of bees have found the flowers and a few monarch larvae hang from the swamp milkweed, which appears to be less tasty to deer than the more common milkweed, encouraging signs for Erin Collins who conceived of the idea of using this 5+ acre tract for her students’ hands-on education.
Collins comes from a horticulture background and is now supervisor of the Agriculture Business & Horticultural Science Program. She is bringing students in both that course of study and agriculture to the farm plot which is part of the Foodshed Alliance SAgE project.
The Sustainable Agriculture Enterprise was designed to alleviate the problem beginning farmers face in a state with expensive land. SAgE has two tracks of land for lease. The other is in Warren County.
The Foodshed Alliance grew out of Genesis Farm, an ecological learning center in Marksboro that has in the years since its founding in 1980 presented many educational programs, created a Community Supported Garden, held camps and other children’s programs and been a center of agricultural life in Warren County.
Collins was an apprentice at the CSG at Genesis Farm in 2010 and when she heard the Foodshed Alliance was leasing farmland, she jumped at the chance to be a part of the project.
SCCC shares the property with the Lenape-Ramapough’s Three Sisters Garden, a beekeeper, a sunflower grower and other leased farms.
The northern parcel right on the road was the choice spot in Collins’s opinion because it leant visibility to the school’s commitment to its agriculture program.
Besides the pollinator patch, the SCCC plot has a vegetable garden and a smaller fenced in area with sunflowers. Collins determined the pandemic year would be a planning year for the program and one of the things she helped set up was a partnership with Newton High School.
She said she started a dialogue with Newton FFA advisor Andrew Morris about running concurrent courses for the high school and college but “we never got past talking about the land.”
“Newton has a stellar FFA program,” she said on a recent sunny afternoon on the farm.
At the high school the students work in a greenhouse, but they are enthusiastic about working on the farm as well. The college is also in Newton, not far from the high school.
In spite of the pandemic, the garden, pollinators and sunflowers did well, but Collins said she is working on solutions to keeping her little farm tended over the summer when most of her students have jobs.
The high school students will have some land of their own on the farm and Collins has some other plans for sections of the plot, including growing grain. She noted there is a big demand for artisanal grain these days and the SCCC Culinary Department is especially interested.
The culinary department has been operating on a leased parcel in Stillwater Township but will move into a new learning and dining facility, the McGuire Technical Education Center, on the former McGuire Chevrolet property in downtown Newton, in the spring of 2022.
The culinary department has a mill and pastry courses so the grain will be put to good use.
Collins is also interested in planting sweet corn, and possibly using a wooded area just off the garden for mushrooms, starting with one or two varieties.
She said she anticipates being able to borrow any equipment the school doesn’t have from the Rutgers Cooperative Extension Service.
The culinary program is only one customer, Collins said. She provided materials for the school’s construction class to build a farm stand for the SAgE site on the well-traveled highway.
Collins is looking toward the future for more additional programs in her department.
There are currently two turf management classes and she would like to see that increase.
The college could eventually offer a certificate program in organic farming and one in homesteading, she said, noting that a number of her students have expressed interest in the practicing homesteading.
Many of Collins’ students are slightly older than the average age for starting college, as she was. After high school she taught about indigenous plants at a summer camp and then worked for Americorps. D
eciding she wanted to go to college, she enrolled in a two-year school at age 21 before getting her four-year degree and then a masters from Oregon State University in Corvallis.
Her roots are in the Midwest, but her parents had moved to Oregon by that time.
What brought her east was the desire to learn more about vegetable gardening in an area with good soil. She now loves living in Swartswood, she said.