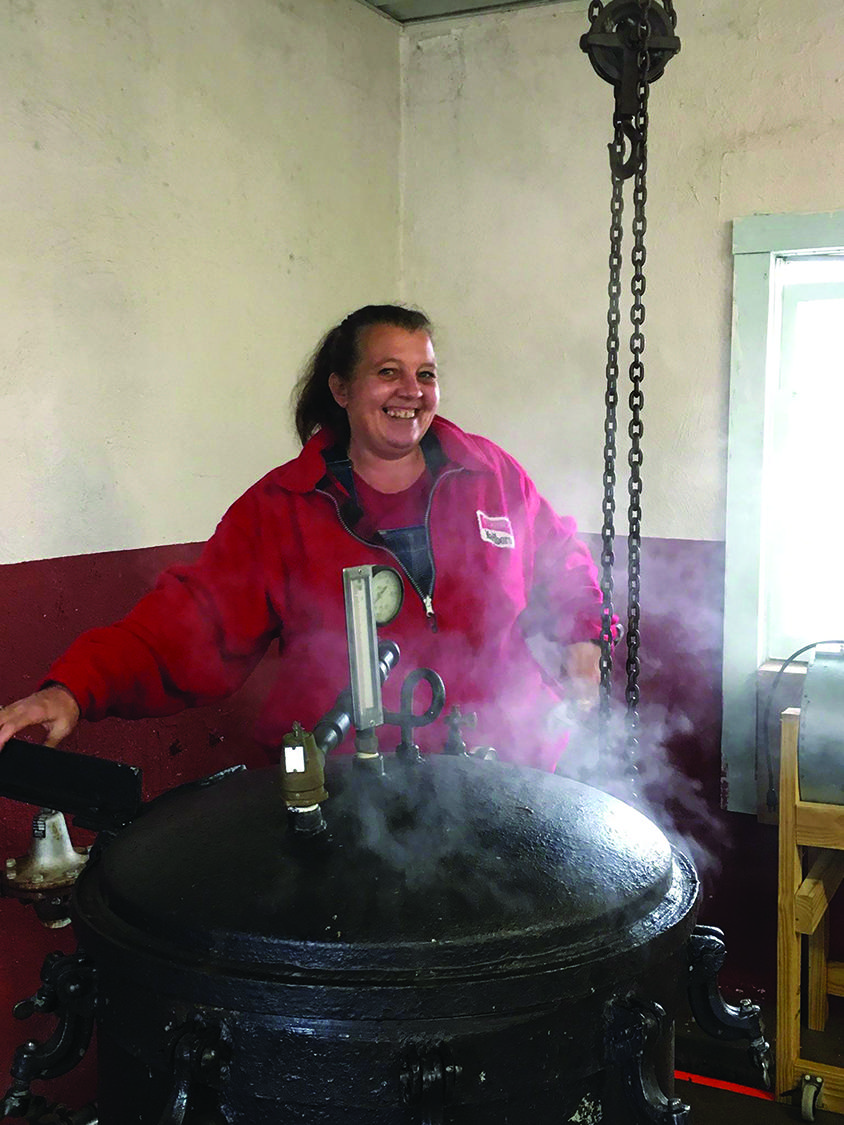 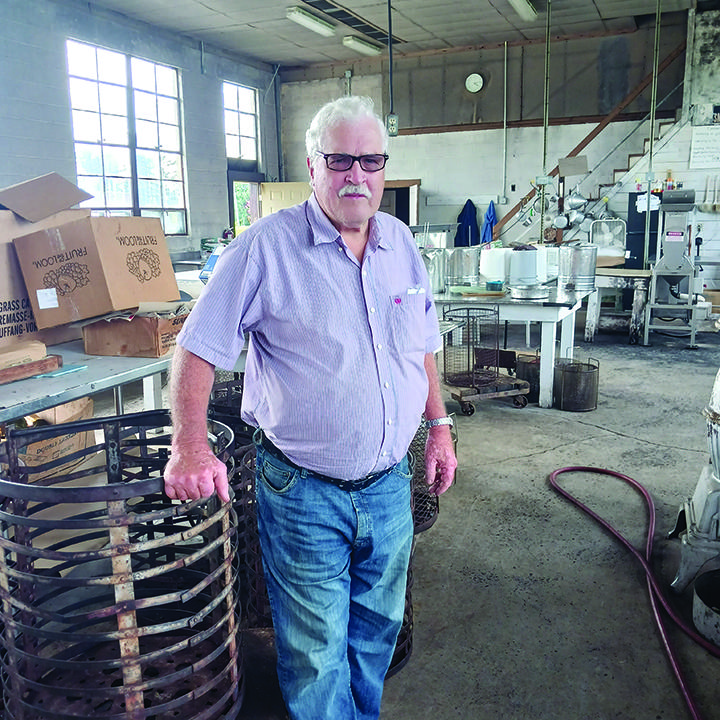 Toni Stump, top, stands behind a larger pressure canner at the Callaway Community Cannery in Franklin County, Va. She has been the cannery manager for six years. Ronald David, above, manager of the Glade Hill Community Cannery, said their canning season has started earlier than normal and continues to be busy. (Top photo courtesy Toni Stump; Above photo courtesy Carol Haynes)

FRANKLIN COUNTY, Va. — The first time Toni Stump walked into Callaway Community Cannery in Franklin County, she said it was the realization of a dream. As a young girl in a family that raised and canned its own food, she came to love the activities and wanted to have a big garden herself and can food.
Stump has been managing the Calloway cannery for six years.
At the county’s other community cannery in Glade Hill, Va., Ronald David has been the manager for 29 years.
David, 78, recalled his family coming to the Glade Hill cannery in the 1950s, when tomatoes were a big crop in Franklin County in those days. He said as he and his wife raised their six children, she did a lot of canning. Along the way they turned to the cannery, especially to make apple butter, and he became manager.
Stump and David are part of the remaining network of community canneries operating in Virginia that support local gardeners, rural residents and organizations.
“Community canneries originated with the Victory Garden era of World War II in the 1940s and were historically supported by the local school systems where they were typically used as educational tools for home economics,” Donna Meade, Virginia Cooperative Extension Family and Consumer Services specialist wrote in a 2011 Extension bulletin.
Stump said the canneries were usually built near schools to help feed the children, calling on her father’s stories of that time.
In the Smyth County, Va. town of Marion, he had told her that the cafeteria ladies would pick green beans from local gardens and have the school children snap them.
David added community canneries were also established near commercial canneries that were once as a common as post offices, nearly one for each town.
While it’s unclear how many were first established in Virginia, by the end of the war, according to a 1977 USDA publication, there were more than 3,800 community canneries in the United States.
Like commercial canneries that once heavily dotted the landscape of the Mid-Atlantic region, market forces and societal changes shuttered many community canneries. By 2011, Meade listed only 11 operating in Virginia but since then only two have closed.
Like Franklin, Russell County also has two operating community canneries and others are running in Carroll, Hanover, Bedford and Prince Edward counties.
“While Virginia is home to some of the oldest canneries in the nation, the canneries have experienced many ups and downs over the years.
“Those that are still operating, struggle from one season to the next to remain an increasingly growing and valuable service to the citizens that utilize them,” Meade said.
The two Franklin County canneries are supported financially by the board of supervisors and administrated by the county school system.
The canning season has started earlier than usual this year, and the cannery continues to stay busy, David said.
While much of the food comes from local sources including family gardens, David and Stump said people are also canning food they have purchased.
He added he’s seeing more meat purchased in stores and brought to the cannery to be preserved.
Carol Haynes, the Franklin County Family and Consumer Science Extension agent, recalled her own experiences growing up in neighboring Patrick County. She said her family would pack their lunch and go to a community cannery for a day. People waited their turn and helped each other get their food preserved.
At the Callaway cannery, Stump said she sees that tradition continue with three ladies who just show up to help the customers because they enjoy it. The Callaway cannery’s size does not necessarily reflect the volume of food processed in it, Stump added.
The area’s German Baptist community makes use of it, canning large quantities of fruit, vegetables and meat. One woman canned 500 pounds of chicken this year.
Stump said the Callaway cannery serves from 150 to 200 customers a year. David estimated that between 3,500 and 4,000 jars of preserved food are made at the Glade Hill cannery annually, leading him to believe he has helped make more than 100,000 jars in his tenure.
Both he and Stump said apple butter is one of the most popular products made by cannery patrons every year.
A large volume of the jars comes from the fundraising efforts of churches and other organizations in the area that make large quantities to sell at festivals and other events. David said he already has several churches booked for the fall.