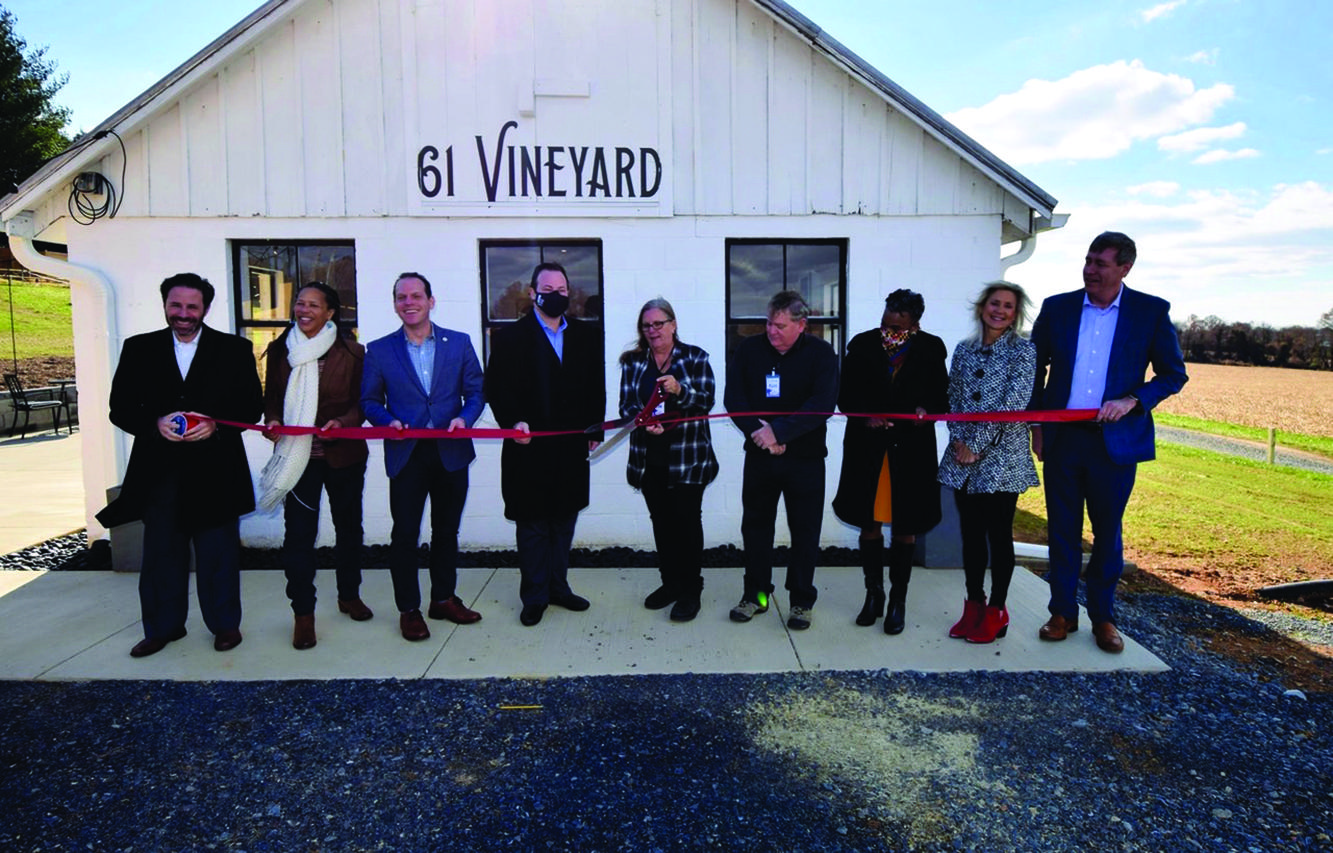 Holding ceremonial scissors, Pam Giganti, co-owner of 61 Vineyard in Damascus, Md., debuted a tasting room on her winery in November. State assessors recently visited the building, sparking concerns that the state will view upgrades to the building — an old milking parlor — and value them as commercial upgrades rather than agricultural, potentially raising her taxes. Owners of value-added agricultural operations in Maryland have voiced similar concerns, and the legislature passed a bill last month requiring the state to study the issue. (Photo courtesy 61 Vineyard)

Pam Giganti was startled in January when she glanced at a security camera feed at her winery in Montgomery County, Md., and noticed three people surveying a building on her property.

“I was just perplexed because it’s three people — three vehicles — measuring my building,” she said. The winery had been closed for the winter. “I’m watching it on the security camera going, ‘What the heck?’”

The group turned out to be state assessors, there to determine the value of 61 Vineyard’s tasting room built inside an old milking parlor on the Damascus farm she and her husband Mark purchased in 2017. The single-story building, roughly 20 feet by 30 feet, includes a tasting bar and a bathroom.

Giganti, who had not yet seen her reassessment, said she fears pieces of her operation could be deemed commercial property instead of agricultural, raising her taxes by thousands of dollars.

“The whole thing is just very disturbing for me,” she said. “We just planted 8 acres of grapes, which we ordered last year. I’m wondering ‘Gee, I hope I have money to pay for it.’”

State officials claim there has been no change in assessment policy, but the General Assembly passed a bill in April requiring the state to study the issue. The Maryland Department of Agriculture and the Department of Assessments and Taxation will examine whether “agricultural accessory use improvements”, such as those related to farm wedding venues, agritourism or agricultural alcohol production, should be assessed differently than improvements to buildings on non-agricultural land. The committee can also make recommendations and must examine how other states have handled such questions.

“So many of these businesses are getting started as a lifeline to stay on the farm, to keep the farm,” said Kevin Atticks, executive director of Grow & Fortify, which operates several state trade associations in value-added agriculture. “Farmers and their kin are looking for ways to make farms profitable because many are no longer profitable.”

Chester Yoder, co-owner of Branch Bender Cidery with his wife Trish in Garrett County, also experienced a reassessment recently. Six years ago, the couple had purchased a farm in Accident from Trish’s family with an agreement to keep the property in agriculture for five years. Yoder assumed he was honoring that when he built a cidery in the farm’s barn and a tasting room in its machine shed.

When an assessor visited the property last year, the man said both facilities violated the farm’s purchase agreement because they were commercial. Yoder said he had to pay a $1,000 fine, and the property was reassessed. Now, he said, the two facilities and an acre of his farm is deemed commercial property; the other 172 acres are agricultural. In a state where farm diversity is increasingly essential and conventional agriculture less and less profitable, he said he worries such enforcement could hurt farms searching for new ways to survive.

“Honestly, I felt it was an overreach of government authority especially in light of what we were doing,” he said. “What if someone has some ideas, especially for value-added (agriculture) and they try something, and they get penalized?”

But the state hasn’t changed the way it assesses property, said Dan Phillips, supervisor of assessments in the state’s real property division. About 130 assessors examine about 700,000 properties in the state each year. Increasingly, he said, as vineyards and other value-added operations have opened and farms have transitioned into new businesses, such as weddings, improvements to properties on those farms have required reassessment and values have risen. A farm barn, he said, newly outfitted with features such as bathrooms, stages or other features uncommon in traditional barns must be reassessed.

Atticks said he remains convinced the department has changed its approach. He knows of or represents too many operations that have faced reassessments over the last nine months that could significantly boost their taxes. There’s been a change in policy within the department or a change in enforcement, he said.

“‘We haven’t changed anything’,” Atticks said, repeating the department’s statement. “I don’t know whether it’s a term of art or the nomenclature’s off, but something has changed. What is it?”

A number of farmers and organizations, including the Maryland Farm Bureau, the Maryland Horse Council and the Rural Maryland Council, supported an earlier version of the study bill mandating that improvements to buildings for specified endeavors on agricultural land be assessed as agricultural property.

“This is a burgeoning community of small businesses that are both preserving our precious farmland while also diversifying incomes and creating significant tax revenue via the value-added products,” said state Sen. Sarah K. Elfreth, D-Anne Arundel County, the bill’s sponsor, to the Senate Budget and Taxation Committee on Feb. 16.

The bill requires the study to be completed by Dec. 1. At that point, it will be up to the legislature to change the laws if necessary, Phillips said. In the meantime, owners of reassessed property can appeal their cases, all the way to the state tax court, he said.

“I work in a business where nobody likes to pay property taxes,” he said, adding these farms and value-added operations are “looking for a way to lower their property taxes, which is how it appears to me.”

But if farms see their taxes rise significantly because they’re trying to diversify into value-added agriculture, it puts an increasing portion of the state’s agricultural industry at risk, Atticks said.

“A lot of people will choose not to be on farms,” he said. “It’s just another compounding factor to drive away farm activity.”