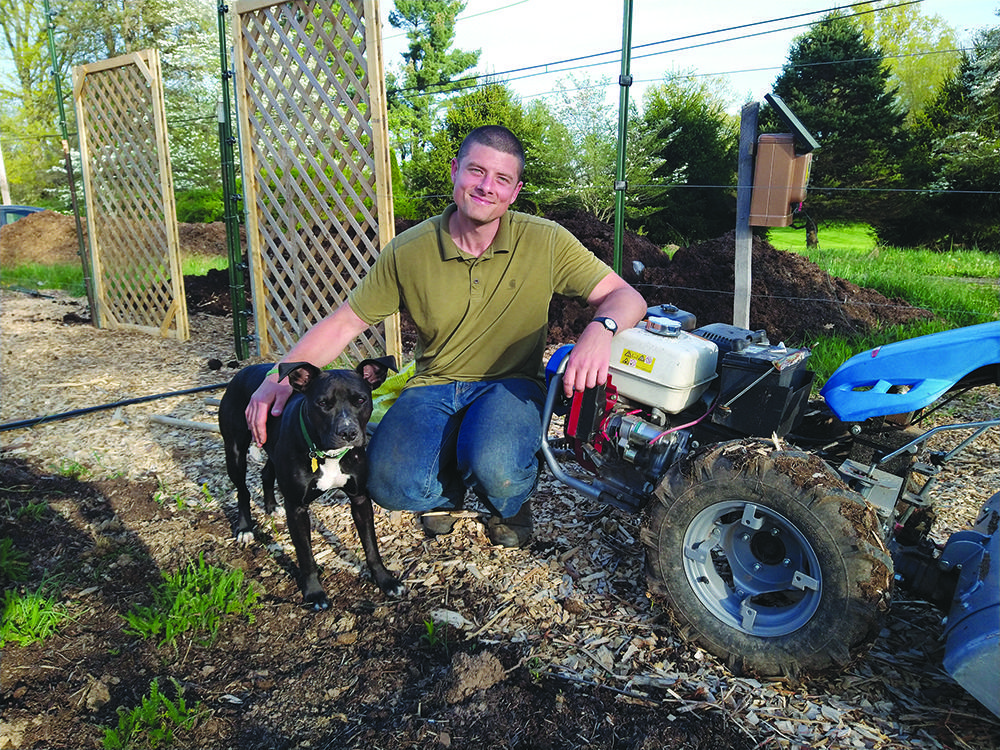 In his role as executive director for NOFA-New Jersey, Devin Cornia said he has plenty of opportunities to influence food policies on the local and county levels. (Photo by Richard Skelly)

STOCKTON — The Like so many other small-scale farmers, Devin Cornia, NOFA-New Jersey’s new executive director is looking to change the nation’s food system.
The 2012 graduate of Atlantic Cape Community College, who grew up eating unhealthy foods in Egg Harbor Township.
He had a short career in law enforcement in South Carolina before coming back home and finding his true passion in life was growing organic fruits, vegetables and herbs.
He has been based at his Hungry Work LLC, a small farm off Route 29 in Stockton, since Feb. 1, 2019.
Prior to jumping into farming full-time, Cornia worked as store manager at Basil Bandwagon Natural Food Market in Lambertville and worked as a co-manager with the Hunterdon Land Trust’s Farmers’ Market in Flemington.
“To start at the beginning, I grew up kind of unhealthy, loved watching the Food Network and ate a bunch of trash growing up in Egg Harbor Township,” Cornia said at his farm, where he was working neatly planted rows of herbs. He majored in criminal justice at Atlantic Cape Community College and found a post shortly after graduating in South Carolina.
“I worked in the law enforcement department of a hospital. It pushes your morals a little bit. I got tired of that, you end up becoming a tool for the system,” he said.
He had his own garden at home in Egg Harbor Township from the time he was 12.
He said he knew he loved raising vegetables.
“I was sitting there at the metal detector one day looking at farm listings around New Jersey, and the best one I could find was right around the corner from here, Sandbrook Meadow Farm. It was run by Alex Sawatzky, who became the greatest mentor I ever had in organic farming.”
He quit his job in South Carolina, returned home to the Garden State and spent several years working with Sandbrook Meadow Farm and later took a post as manager with Basil Bandwagon, a natural food market in Lambertville that has expanded to three stores in other municipalities.
“Alex was amazing,” Cornia said. “I was working in restaurants growing up, interested in gardening and farming and wanted to be a chef for a while, you want to do it all sometimes when you’re that young.”
He lived on the Sandbrook Meadow Farm cooperatively in a big house with other members of the CSA/farm.
“We were living together, partying together, fighting sometimes together, but we all loved each other and our core group of people. We’re all still very close,” Cornia said of Sandbrook Meadow, which he joined in 2015.
“Our food system is so impressive,” Cornia continued, “just looking at the raw amount of food that can be grown but look how much gets wasted. I think it’s something like 35 percent of what goes into the landfills is food waste, and then look at how many people don’t have access to the basics.”
Kids he met at a non-profit farm in Pittstown, America’s Grow-A-Row, didn’t know what mud was; they didn’t know what a potato looked like.
“I thought, while I was working at Sandbrook, I wanted to do something, make an impact. I wanted to be the food mayor of New Jersey of sorts, to see what can be done to change up the system a bit.”
In his role as executive director for NOFA-New Jersey, Cornia said he has plenty of opportunities to influence food policies on the local and county levels as well as encourage more people to consider organic farming, given how blessed New Jersey is with some of the finest soils in the nation.
“One of my big goals right now is how do we build a New Jersey Centric food distribution hub?” he said. “To my way of thinking, the easiest way to go about it is to go with shelf-stable and value-added products that are made with 100-percent New Jersey grown produce.”
“It takes leaving New Jersey for a time to come back here and appreciate it, in my opinion.”