Cosgroves ‘in awe’ of community support 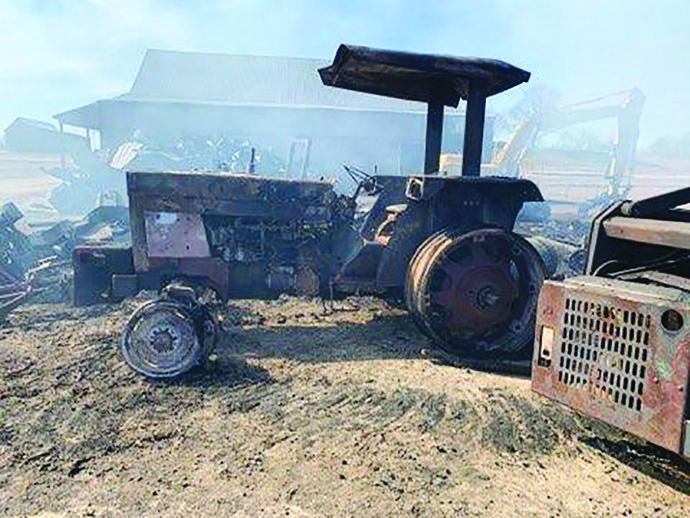 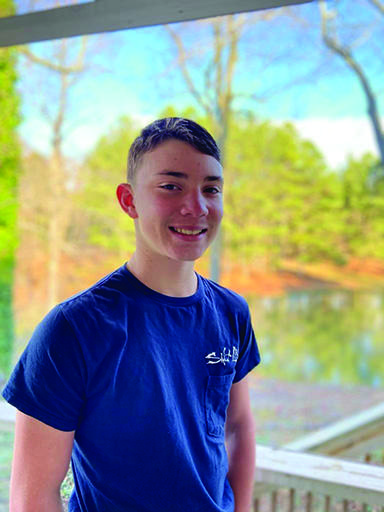 Wesley Cosgrove, 13, bought an International 884 tractor two years ago to use on his family’s farm. It was one of several pieces of equipment destroyed in a March 7 barn fire. (Photos courtesy Cathy Cosgrove)

ST. LEONARD, Md. — In the aftermath of a devastating barn fire on March 7, a groundswell of community support flowed fast to the Cosgrove family’s Horsmon Farm in Calvert County.
Calls offering equipment, money and help cleaning up — even from neighbors they had never met — were overwhelming, Cathy Cosgrove said.
“I’m so in awe. We have a wonderful community here where I live,” she said.
While grateful for the generosity, Cathy said she was reluctant to take donations for the farm right away, not knowing the full extent of the damage and how their insurance would factor in. Naturally, she thought of her and husband J.R.’s children.
Among the many pieces of equipment and straw stored in the repurposed tobacco barn was a 1979 Ford F150 pickup and an International 884 tractor their 13-year-old son Wesley had purchased himself.
The tractor was used extensively on the farm and he and his father were restoring the pickup in the barn’s shop.
“Everybody was asking what they could do,” Cathy said. “I thought, ‘He’s the one that is out everything he owns, his possessions that he’s worked so hard for.’”
It prompted Cathy to start a fundraiser campaign on gofundme.com, directing donations toward replacing Wesley’s equipment. By the end of the week, the fund had more than 55 donors and was well-past halfway to its $8,000 goal.
“I am ecstatic over the amount of generosity that has come from my friends, customers, farm friends, even the people Wesley did work for,” Cathy said.
Shortly after 3 p.m. on Sunday, March 7, Cathy’s daughter Kaitlyn saw smoke coming from the barn where she watched her father J.R. Cosgrove enter about 30 minutes earlier.
“Her fear was that he was in there,” Cathy said. “We’re very fortunate that our family is here.”
Two minutes after they called 911, the barn was fully engulfed in flames, leaving the arriving firefighters to focus on protecting the buildings surrounding the barn.
“This was the largest barn on our farm,” she said.
The barn stored multiple tractors, a skid steer loader, round baler, 1,000 bales of straw that were already sold and a slew of tools in the shop.
Both of Wesley’s vehicles had family history as well.
The 884 tractor was bought new by J.R.’s grandfather who sold it to a cousin who then sold it to Wesley two years ago. The pickup originally belonged to Cathy’s father, Dickie Horsmon.
“He’s put quite a bit into it,” she said of the pickup. “You want to give your kid as much as you can. You also want them to earn it. He had earned that.”
Wesley has been a key part of the farm for years, Cathy said, doing just about anything, but preferring to do the fieldwork while Kaitlyn gravitates more toward caring for their livestock.
The 55-acre farm grows mums, pumpkins, produce, straw, hay, beef, pork, and chicken and offers a variety of agritourism activities. The Cosgrove kids are the family’s fifth generation on the farm.
“They both want to continue the farm,” Cathy said. “They can’t imagine living off the farm.”
Wesley said for him, farming brings a feeling of accomplishment.
“The biggest thing for me is after a long day of work, coming in and having a good dinner and knowing you got something done that day,” he said.
He said he’s not sure just yet what he’s going to do about the equipment he lost, adding he doesn’t yet have the words to describe people’s generosity toward him and his family.
But he does know his passion for farming hasn’t wavered.
“I still love farming,” he said. “One big thing I’ve learned from farming; you really have to stay positive no matter what and push through it.”