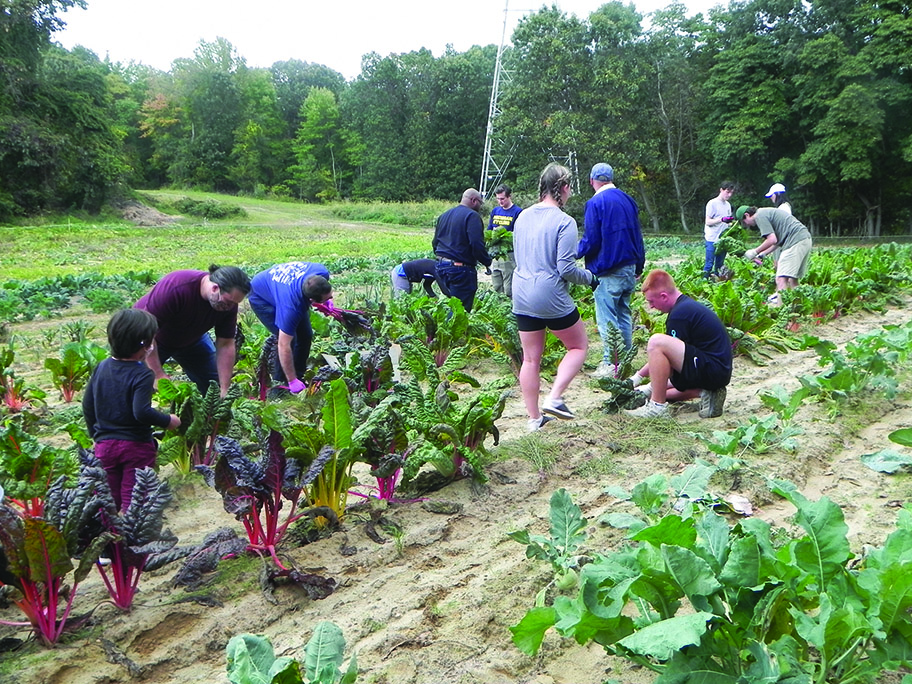 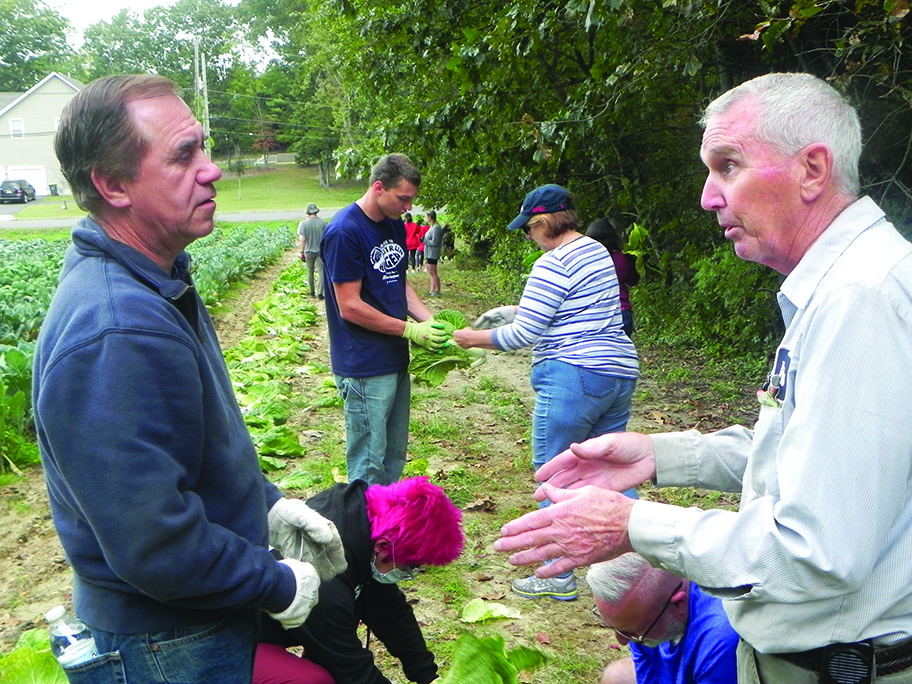 OLD BRIDGE — A crew of about 45 volunteers, including a bunch of college students from Rutgers Against Hunger, showed up at Hauser Hill Farms here on Oct. 9 for a gleaning coordinated by Farmers Against Hunger and New Jersey Assembly Speaker, Craig Coughlin, who lives nearby in South Amboy.
Camden County-raised Al Murray heads up the efforts as executive director of the New Jersey Agricultural Society. Also on hand were a number of other local Old Bridge officials and New Jersey Farm Bureau director Peter Furey.
While there were a few sprinkles of rain and skies at one point looked threatening, the two hour gleaning went off without a hitch or weather delays from 10 a.m. until about noon.
Volunteers picked recently fallen apples from trees in Hauser’s front yard orchard and then walked a short distance up Ticetown Road to another plot of land where he was growing vegetables, the second plot protected by solar-powered deer wire fencing, needed in this mostly suburban neighborhood a short distance from Route 9.
“This is a wonderful turnout today,” Murray said at the edge of one of Hauser’s apple orchards along busy Ticetown Road.
“It’s important to note that Speaker Coughlin has been doing these for about five years now. As an Assemblyman, he’s been very proactive in trying to fight hunger in New Jersey. This is a passion of his which is wonderful because it saddles up with what we do,” Murray explained.
Farmers Against Hunger is just one charitable arm of the New Jersey Agricultural Society, as two other key programs include Gardening in the Schools and the Agricultural Leadership Society.
Murray noted the New Jersey Ag Society conducts about 120 gleanings each season from a batch of over 115 participating farms in almost all of the state’s 21 counties.
“We have a database of about 1,200 volunteers, so when we get a call from a farmer we will send out a notice to the volunteers, and then we have three trucks that we use to transport the produce. We’ll truck the produce to feeding organizations around the state,” Murray said.
“We moved 2.6 million pounds of food in 2020 during the pandemic. It’s a wonderful program, and the current estimates are that about 16 percent of New Jersey’s population is still food insecure, so this goes a long way to help address the problem” Murray explained.
New Jersey Farm Bureau’s Pete Furey said gleanings with volunteers — young and older — are a win-win situation.
“Doing things like gleanings to address the hunger issue is a natural extension of our lobbying efforts, and we know that Speaker Coughlin is a champion of this cause,” Furey said after the gleaning activities had wrapped up shortly after noon without any interruptions for rain.
“Farmers are naturally inclined to food donation, so it’s just a matter of sewing it all together,” Furey said.
The farmer wins because he or she gets the excess produce cleaned up out of the field for the season, and volunteers get a day of fellowship and camaraderie in the fields and orchards knowing they are doing their good deeds for the week, or the month, as the case may be.
They also get on-farm experience which can lead to eventual part or full-time employment at a farm operation.
At New Jersey Farm Bureau headquarters on West State Street in Trenton — opposite the New Jersey Statehouse, Furey continued, “we have our have our finger on a lot of different issues and this one is growing in importance, because urban legislators see that the farms have a connection to their cities. They realize [New Jersey’s] farms are vitally tied to the urban areas of the state.”
Hauser, his wife Midge, and his nephew John Francis helped the crew of volunteers and Coughlin and his aides as they boxed up recently fallen apples and picked Swiss chard and various types of cabbage.