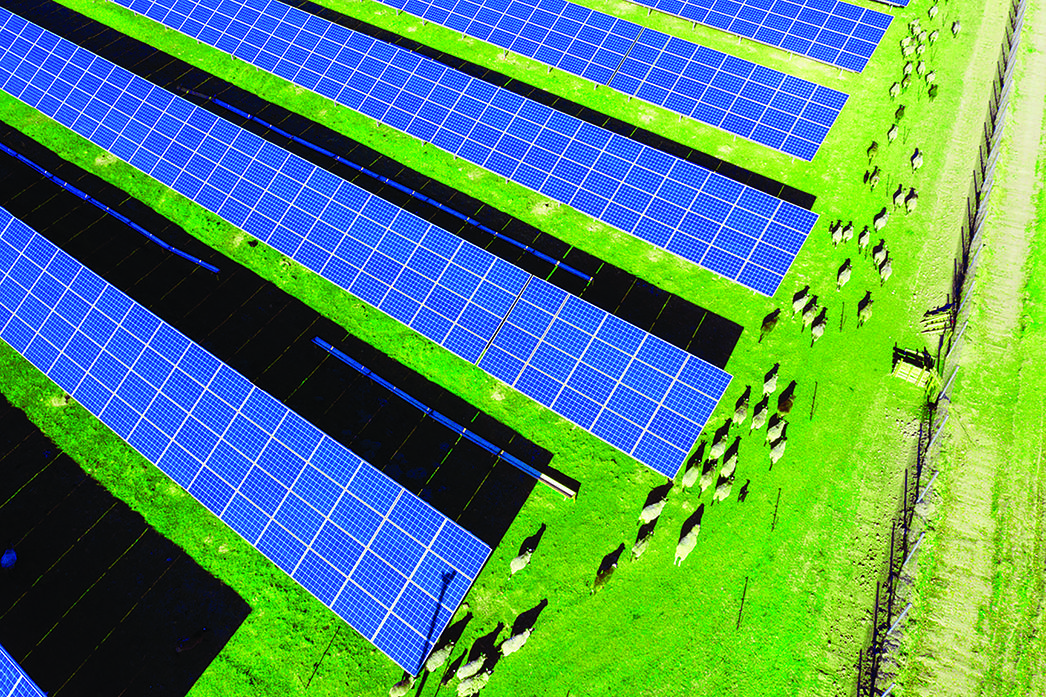 Counties across Maryland are scrambling to manage solar energy projects, particularly on farmland, as renewable energy production ramps up to meet state-mandated production goals. Farmers are also using revenue from smaller solar farms as a way to diversify and better stabilize their operations. (Photo by Getty Images)

Since the solar industry began growing its presence in Maryland’s Montgomery County — with an eye toward its prized agricultural reserve — Jeremy Criss jokes that he’s practically become an energy engineer just to advise and represent the county’s farmers.

Criss, director of the county’s Office of Agriculture, along with farmers and preservationists, successfully fought efforts by two county council members last year to carpet 1,800 acres of the reserve — about 2 percent of it — in solar paneling — enough to power 50,000 homes. Their opposition, he said, was critical to protecting the viability of Montgomery’s increasingly vulnerable farming community.

“I think that agriculture would not exist today (in the county) had the ag reserve not been created,” he said.

It’s a conflict that’s become more common in Maryland as local jurisdictions and the state government embrace renewable energy to reduce emissions and slow the pace of cataclysmic climate change. By 2030, Maryland expects to meet half the state’s power needs with renewable energy, either purchased from outside the state or produced within it. By 2028, it expects nearly 15 percent of that to be from solar installations.

A state task force on renewable energy development produced a report in 2020 for Gov. Larry Hogan that projected between 7,800 and 33,000 acres of farmland — or 0.4 percent to 1.7 percent of the state’s total farmland — would need to be covered in solar paneling to meet those goals. That includes up to 3 percent of its prime farm acreage.

“There’s only so much you can pipeline from a windmill in Wisconsin,” said Michael Sanderson, executive director of the Maryland Association of Counties. “Most of it has got to come from pretty nearby, and that’s why we’re seeing the press of, ‘Get rid of the soybeans. Go silicon. That’s where it’s at.’”

The debate in Montgomery County last year was a prime example. The county council ultimately opened the agricultural reserve to solar paneling, albeit with restrictions that frustrated environmental groups that supported more permissive policies. But the subject of placing renewable energy, including solar paneling, on farmland has become more complicated in recent years. Although many within agriculture frown at the surrender of farmland to the solar industry, some growers are embracing it as a source of reliable income and an opportunity to further diversify their farm operation.

“The farmers are not against solar,” Criss said. “But (the ag reserve) wasn’t created for solar. It was created for agriculture.”

When the county council established the 93,000-acre reserve in 1980, it was heralded as one of the most ambitious and creative preservation projects in the country. The council placed heavy limits on development within the reserve — about 1 home for every 25 acres — and sought to help farmers by allowing them to sell development rights on their properties at a higher density to developers who could then build more intensely in other, less protected areas of the county. From a preservation standpoint, the reserve has largely been a success, said Lonnie Luther, president of the county Farm Bureau.

The county has approved one solar project within the reserve — a 24-acre solar farm on a capped landfill — and four others are either under review or have been informally proposed. Mike Chapman, one of the owners of Free Rein Farm, a boarding and horseback riding facility in Gaithersburg, is one of those projects. He just began the process of turning 4 to 5 of Free Rein’s 84 acres into a solar farm that would produce the facility’s energy and sell excess to Pepco, a regional power provider. He said his project avoids the farm’s most productive soils, as required by the county.

“It’s a way to generate some revenue off of land that wasn’t all that economically productive for us,” he said.

The project will also produce renewable energy for low- and moderate-income customers, allowing them to save on energy costs. It helps the environment, and it’s ultimately impermanent, he said.

“The installation is pushing a bunch of steel poles in the ground and bolting solar panels to them. In 20, 25 years that can be all removed,” he said. “It’s restorable.”

Montgomery, however, isn’t the only county wrestling with solar energy development on farmland. Anne Arundel County threw the handbrake on solar construction in 2017 after interest from the solar industry in the county’s rural areas alarmed environmental and agricultural advocates, County Executive Steuart Pittman said.

“There was a lot of opposition in the community to them largely because of the impact on people’s views,” he said. “I’m very sensitive to the challenge in our county of finding farmland to produce. Farmers in our county, particularly those that do grain and have a combine, need to rent land in order to pay for that combine and all the equipment, and competing with 30-year leases on solar would make it hard for them to operate.”

The county eventually redefined solar paneling on rural land as a special exception use instead of a broader development right, making it more difficult to erect panels. It also encouraged the solar industry to consider brownfields, buildings and already-developed land. (The county is also developing about 20 acres of a capped landfill in Glen Burnie into a massive solar field — part of its larger goal to run the entire county government on renewable energy by 2030.)

“It slowed it down a lot” in rural areas, Pittman said. “I’m told that the special exception is very much a disincentive.”

Caroline, Frederick, Kent and Queen Anne’s counties have also responded to an increase in solar farm proposals over the last two decades with regulation, including, in some cases, the protection of prime agricultural soils and acreage limitations.

“I think we’re running out of counties who are not dealing with this,” Sanderson said. “But the counties who have gone through that process and sort of jumped through those hoops, I think they end up in a better place with all the would-be developers of solar, both large and small.”

The task force report to the governor offered a series of recommendations to preserve agriculture while meeting the state’s solar needs. One of those was encouraging agrivoltaics, which means building solar paneling on farmland while keeping it in production. Livestock, for instance, can graze around panels — known as “solar grazing” in some states. Planting of food crops under solar arrays has also been popular in Europe and Asia.

The report also recommended creating new offset regulations that would require developers to contribute to a county’s conservation funds if they were developing farmland, not unlike what’s required by Maryland’s Forest Conservation Act.

In Montgomery County, Criss said, for now, it’s going to be difficult to develop solar projects in the agricultural reserve. Almost three quarters of it is served by Potomac Edison energy company, which has been less responsive recently to solar proposals.

“They simply put those people on a waiting list, and that’s the last we hear of it,” he said.

But Chapman, a mechanical engineer for power generation facilities, said he’s uniquely suited due to his professional background to hop through the county’s regulatory hoops. Free Rein Farm is also serviced by Pepco. Still, after reserve landowners consider all the county’s solar field requirements — service vehicle access, buffers for streams and wetlands, forest conservation — the project also has to be close to an energy provider’s distribution circuit that can accept the excess energy, he said.

“It’s not easy,” he said. “Given the rules, I’d be surprised if there’s a lot of solar development in the ag reserve because it’s tough to meet all the requirements. … Then you have to finance the whole thing, so that’s something else.”

Whatever happens, Luther, 77, said he hopes farmland preservation is prioritized.

“It boils down to this, basically: If you have an acre of land, do you want solar panels on it or do you want to produce food?” he said. “Every acre we lose to solar paneling is taken away from food production.”