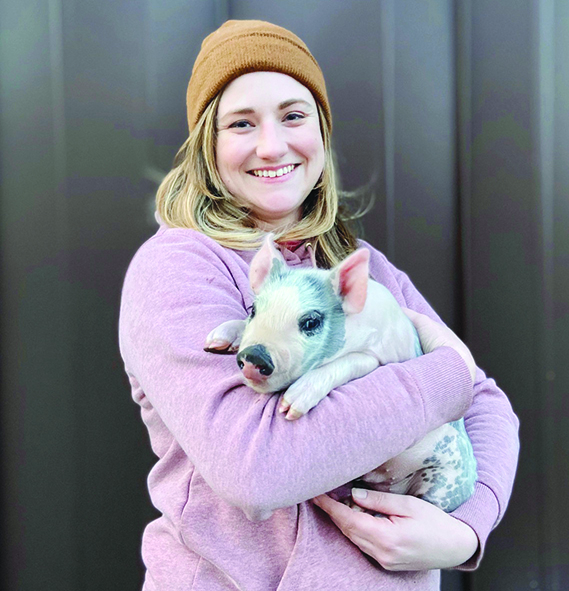 Sarah Campbell, owner of New Roots Farm in West River, said she was inspired to pursue farm stays after speaking with a farmer who told her she earns more money with similar events than she does raising vegetables. (Photo courtesy Sarah Campbell)

On farms larger than 10 acres, his bill would allow for up to 30 special events or overnight stays per year for up to 200 people. It also expands the kind of events a farm can hold to include historical and cultural events. Other permitted gatherings include parties, celebrations, weddings and receptions.

“The goal was to allow the occasional events that many farmers do to continue with very low regulation, but to require some very low oversight of the larger, more frequent events” that affect residential neighbors, Pittman, a Davidsonville farmer, said.

The bill expands on rights already granted to farms in legislation passed in 2017. In that legislation, farms could hold, as a conditional use, hay rides, farm-to-table meals, pumpkin patches and educational events related to agriculture and nature. In addition to expanding the kind of events permitted on farms, Pittman’s bill caps the activity, he said, to prevent it from overwhelming neighbors. Any farm, under the legislation, can hold up to eight special events each year. While farmers larger than 10 acres can have up to 200 people at those events, farms between 5 and 10 acres can have up to 50.

Pittman proposed his new legislation after several farmers in 2018 approached the county’s farming and agriculture commission about holding other attractions such as “farm stays”, which welcome people onto a farm for relaxation and educational programming.

Sarah Campbell, owner of New Roots Farm in West River, is one of those farmers. In addition to her livestock operation, she hopes to renovate several vintage campers that could house guests for “an intimate farm experience and weekend at the farm.”

She said she was inspired to pursue farm stays after speaking with a Wisconsin farmer who said she earns more money with similar events than she does raising vegetables. Neighboring farms also launched agritourism programming and turned the surrounding community of Blanchardville into a small agritourism hotspot.

“I know farmers in other states who do this, and they speak really positively to the experience, and those were some of the people I consulted when I talked to them about what this could look like,” she said.

She said she sees the new attraction as a way to diversify her farm and promote the county’s agriculture.

“I think I would use it as a risk management and revenue tool,” she said. “People also really love the farm. I have friends in D.C. who will drive an hour and a half just for a walk on the farm. Their kids love it. They love having a connection to the farm.”

In a column published in the Capital Gazette newspaper Oct. 4, Anna Chaney, owner of Honey’s Harvest Farm in Lothian, praised the legislation, calling it critical to agricultural preservation in the county, which has lost thousands of farm acres over the last two decades.

“Large-scale farming has become more and more challenging as development has consumed many of our larger tracts of land in this state and especially Anne Arundel County,” she wrote. “To support our working farmers, and allow us to continue to work our land and raise our livestock, we need to be allowed to invite the public to visit our farms for intimate farm experiences that promote our farm products and inspire a love of the land to our visitors.”

“Not everyone understands that,” he said. “It’s cheaper. It’s easier on the taxpayers. When the government acquires land, they have to maintain it.”

The council will hear the bill on Oct. 19.