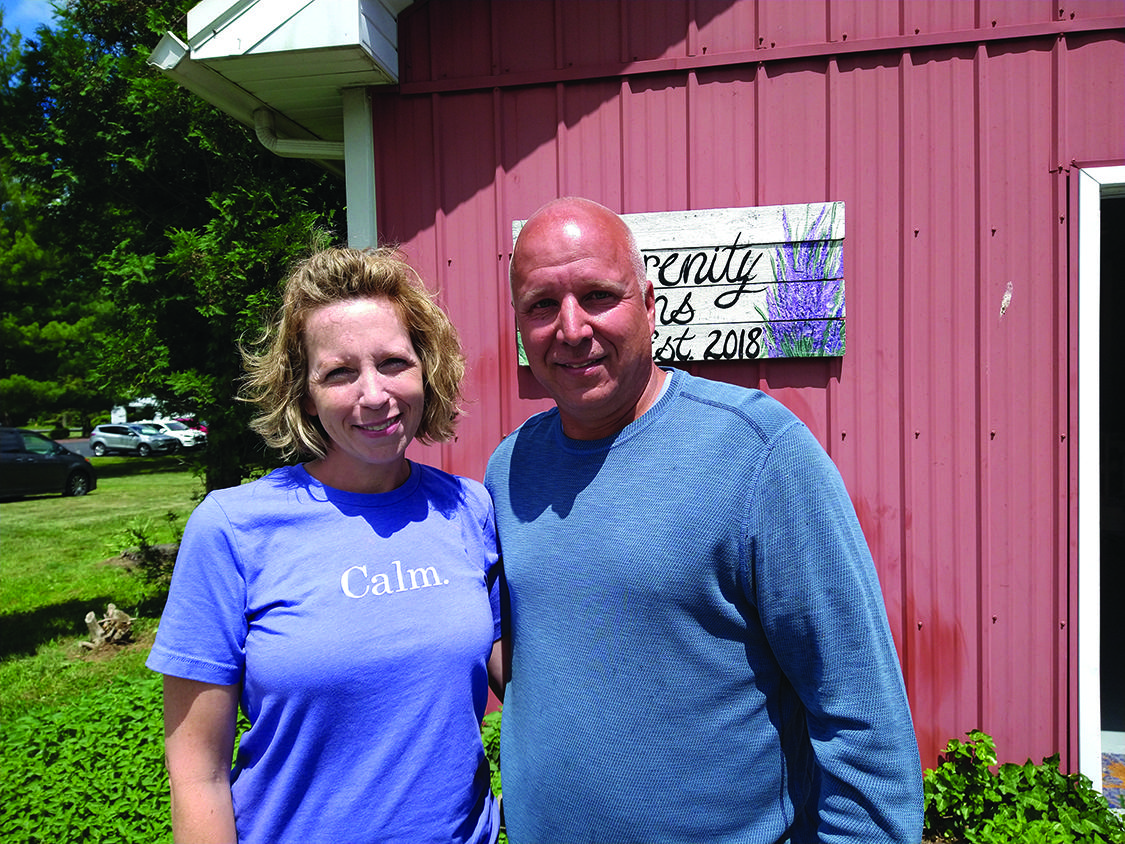 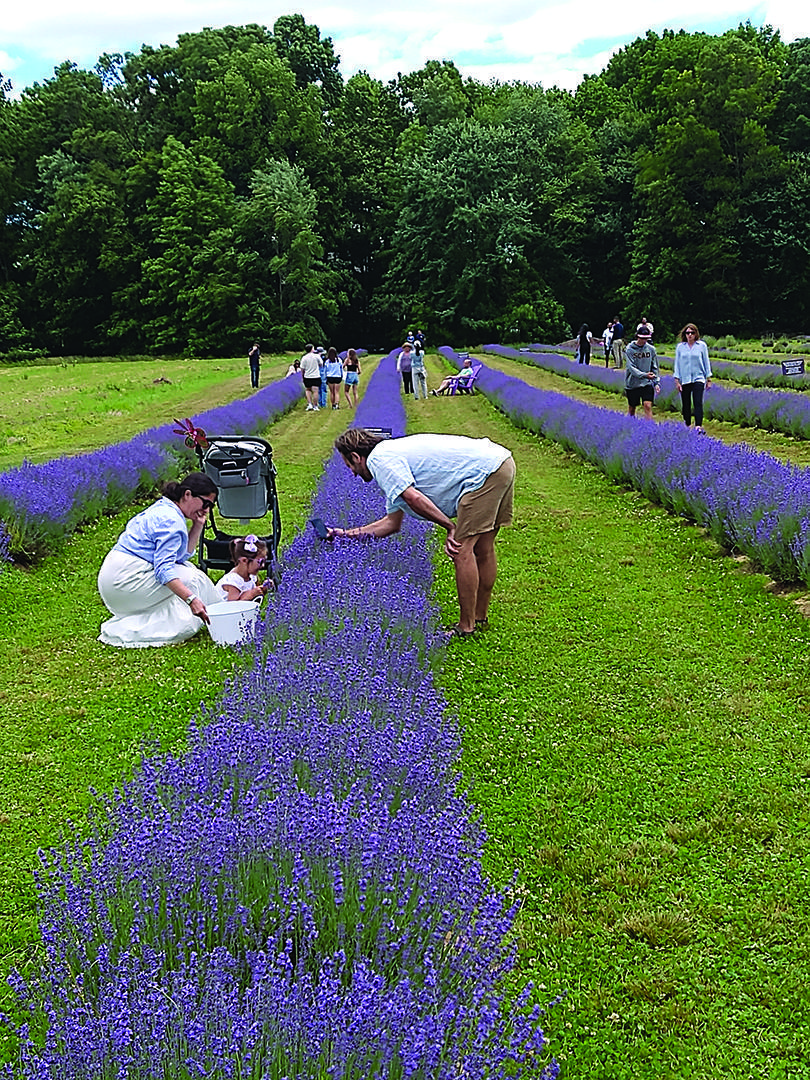 The Gafgens held an open house at Serenity Farms on June 18, with a steady stream of patrons throughout that afternoon, coming to pick their own lavender sprigs and shop in the on-farm store. Above, Shannon and Gary Gafgen planted 2,000 lavender plants in 2018 after searching for a crop that would not be attractive to deer. (Photos by Richard Skelly)

ROBBINSVILLE — Gary Gafgen was searching for a crop that the deer wouldn’t eat when he settled on lavender.
“My father bought this property with the intention of building homes on these 10 acres, but then he fell in love with the open space,” Gary said of his father Elmer.
“He enjoyed hunting but then when the deer came up and started eating all the different crops, we knew we needed to go a different route,” he said.
“We were always growing something out here, we went from strawberries to cauliflower and the next year to some other vegetable. We did corn and soybeans, one year we had 10,000 eggplants out here so we were always growing something.”
Robbinsville Township, in Mercer County not far from Trenton, used to be part of a huge potato growing region that included Cranbury and Monroe townships in Middlesex County and East Windsor and West Windsor in Mercer County.
“This used to be a potato growing community a hundred years ago that’s what all this land was, so people like our neighbor Paul Keris got in again at the right time, growing soybeans and potatoes,” Gary said.
After a lot of research, Gary found out that lavender was one thing deer would not eat, and after hooking up with Timothy and Vince Serinese at Timothy’s Center for Gardening on Route 130, they found out about a company that would help them plant it.
“The first year we planted nine rows of lavender plants, each about 300 feet long and I learned we needed to keep the plants at least two feet apart to prevent disease,” Gary said.
Officially opened in 2018, Shannon Gafgen, Gary’s wife, oversees the production and marketing at Serenity Farms. Gary works for Sales Force, a large corporation based in San Francisco.
That year, they put in 2,000 lavender plants.
Soon after opening, Serenity Farms had a booth at the Robbinsville Township Farmers’ Market on nearby Route 33, and word began to get out about the facility.
“Someone said, ‘I would like to come see the farm,’” he related and it was then they began to think about opening up their farm to the public, so they held an open house in the summer of 2020, following COVID guidelines when people were most craving getting out into some open space.
“Five minutes before people came in that day we had the idea, why not let people cut some of their own lavender and bring it home with them?” he said.
This year, they are adding a corn maze for some fall agritourism, as Shannon Gafgen has a long background in early childhood education. Gafgen said the Mumstead variety works best in terms of color and scent with Garden State spring and summer time weather conditions.
The Gafgens and their children and their farm crew held an open house at Serenity Farms on June 18, with a steady stream of patrons throughout that afternoon, coming to pick their own lavender sprigs, buy some lavender flavored lip balm, skin roller balls, eye pillows, lavender spray bottles, home-made soaps with lavender oil, cookies and other value-added products created by Shannon at the back of their retail store.
At the open house, acoustic musicians performed while some patrons played corn hole and the children’s area had young, friendly “petting zoo” goats behind a fence.
Prior to coming back to the family’s farm, Gafgen raced cars for a living in North Carolina and was on a pit crew with Dale Earnhardt Sr. When still in New Jersey, he often raced at Wall Stadium and in East Windsor and New Egypt.
Shannon Gafgen, who grew up in Newfield, in Gloucester County, said she met Gary in Texas and later relocated to North Carolina to live with him before they both moved back to New Jersey.
“My background is in special education and special needs children, so I love making things for kids” she said, noting their corn maze will be open this fall.
“I love doing this kind of stuff, so it was nice to be able to incorporate our worlds. My husband loves being outdoors in the summer so this was the perfect thing for us to be doing together.”
Shannon said many people don’t realize that you need to apply some pressure to lavender to release the oils and the scent.
“It has lots of different properties,” she said. “It keeps moths away, it’s great to deter spiders and carpenter ants and of course, to keep deer away as well. On the other hand, bees love lavender, they love the scent and will travel miles to get to it.
“We have our own beehives here as well, and bees are fascinating. As it turns out, we’ve learned more about bees here then we have about lavender.”