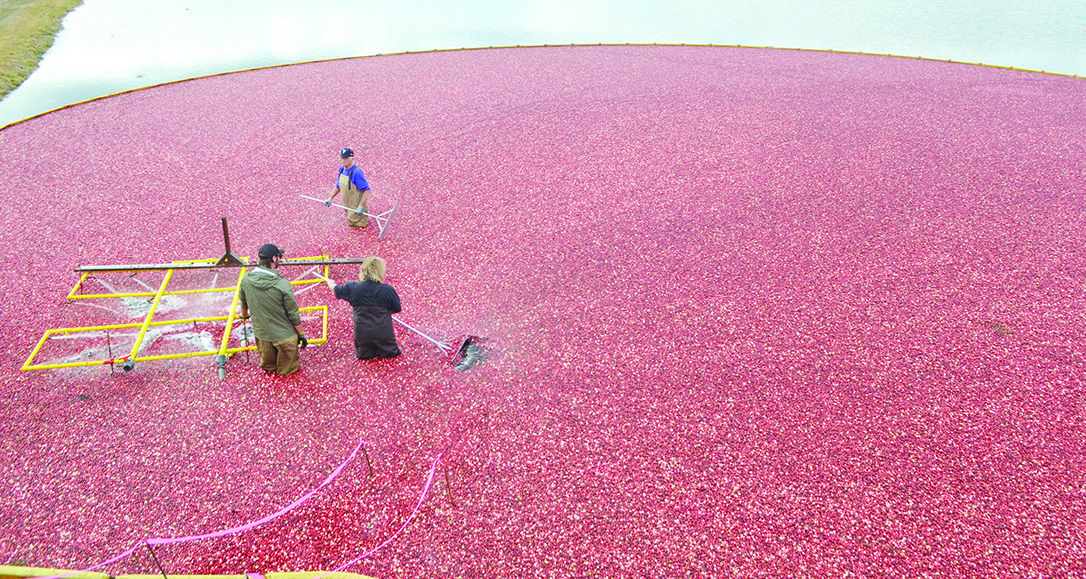 According to the USDA, New Jersey is fourth in cranberry production in the United States. (Photo courtesy New Jersey Department of Agriculture)

Cranberry harvesting is anticipated by New Jersey agricultural officials to begin in mid-September and last through mid-November.
According to the USDA, New Jersey is fourth in cranberry production in the United States.
While the U.S. Cranberry Marketing Committee in February projected the 2021 crop in New Jersey at 530,000 barrels, it revised its estimate to 490,000 barrels at its recent summer meeting in August.
“Cranberries are among the traditional crops we have in New Jersey as they are a popular and savory staple among recipes, especially during the holiday season late in the year,” said Douglas Fisher, the Secretary of the New Jersey Department of Agriculture. “Our soils along with our cranberry growers’ ingenuity and creativity allows us to be one of a handful of states to produce this wonderful crop in such large quantities.”
According to USDA data 490,390 barrels of cranberries were produced on 2,700 acres in New Jersey in 2019; the production value of these cranberries was $14.5 million.
These amounts are lower than in many of the past years.
Almost all of the cranberries grown in the state are sold to the Ocean Spray Cooperative.
“Cranberries are one of three commercially cultivated fruits native only to North America,” said Michelle Hogan, Executive Director of the Cranberry Marketing Committee. “The history of cranberry farming in America dates back to the [early] 1800s, with multi-generational family farms currently operating hundred-year-old bogs. U.S. cranberry growers harvest more than 700 million pounds of cranberries annually on more than 40,000 acres of bogs and marshes. New Jersey is one of five major growing regions along with Wisconsin, Massachusetts, Oregon, and Washington State.”
Sustainability is — and has been — key to farmers of cranberries in New Jersey and nationally.
“Cranberry farmers were stewards of the environment long before it was trendy to ‘go green,’” said Hogan. “For multiple generations, cranberry farmers have been innovating ways to efficiently grow their crop while minimizing the impact on the land around them. In some areas, for every one acre in production, cranberry producers own upwards of six additional acres not in production, but acting as shelter and habitat for hundreds of plant and animal species.”
According to the 2017 USDA Census of Agriculture, there were 26 New Jersey farms growing cranberries on 3,415 acres. One farm was located in Atlantic County and 25 farms were situated in Burlington County in 2017. The 2012 ag census reported that there were 29 farms producing cranberries in New Jersey on 3,433 acres. One farm was located in Atlantic County, 27 farms in Burlington County, and one farm in Morris County in 2012. The 2007 Ag Census reported there were 41 New Jersey farms utilizing 3,550 acres for the production of cranberries.
The acreage of cranberries harvested in New Jersey has decreased to 2,700 acres in 2019; this was the same number of acres of cranberries harvested in 2017. A total of 3,100 acres of cranberries were harvested each of 2018 and 2016; in 2015, the amount was 3,000 acres.
The number of barrels of cranberries produced in 2019 — 490,390 barrels — was less than the amount produced in most of the previous five years. The exception was the production amount — 471,900 barrels — in 2017. In 2018, 508,420 barrels of cranberries were produced in New Jersey, according to USDA; in 2016, 646,000 barrels; and in 2015, 569,000 barrels.
The value of the New Jersey’s cranberry production has varied during the past five years. The lowest value of production was in 2019 at $14,496,000. In 2018, the value was $14,886,000; in 2017, $17,254,000; in 2016, $27,835,000; and in 2015, $21,445,000.
Pricing for cranberries has been lower in recent years as compared to overall levels during the past five years.
The price for a barrel of cranberries in New Jersey, according to the USDA, was $29.60 in 2019 and $29.30 in 2018.
Those amounts compare to $36.60 for a barrel of cranberries in 2017, $43.10 in 2016, and $37.70 in 2015.